The Beginning of CFUW

The remarkable industrial expansion that occurred after the beginning of the First World War opened up many opportunities for women. The increase of urban populations with its consequent industrial growth, led to opportunities for women in industry and in social work. At this time women were already well established in the teaching profession and entering medicine, law, journalism, nursing and social work in larger numbers.

Some of the leaders among university women in Canada had long dreamt of a national federation, but the effective impulse to found it came from Great Britain. Early in 1919, Dr. Winifred Cullis of Britain, who had spent time in Canada during the war years lecturing at Toronto University suggested that women in Canada might wish to organize a national federation so that Canada might become one of the first countries to join in the emerging International Federation of University Women. A similar suggestion came from Virginia Gildersleeve of the American Association of University Women to the effect that, while she hoped the Canadians would form their own federation, but that they might if they preferred, be allied with the American Association.

Canada’s response was immediate. In March 1919 at a conference of four of the leaders in university organizations – Mrs. J.A. Cooper, President of the Toronto Club, Mrs. R.F. McWilliams, President of the Winnipeg Club; Miss May Skinner, then representing Canada on the American Association’s committee on International Affairs; and Miss Laila Scott in Toronto it was decided to create the Canadian Federation of University Women. To read more about the beginning of CFUW click here.

Throughout CFUW’s history, more than a few very notable women have belonged to the ranks of CFUW. Click here to read more about their stories.

Biographies of Past Presidents

As part of the CFUW 100th Anniversary, histories of all CFUW Past Presidents have been prepared and are available on this website.

The first biography of Dr. Margaret (Stovel) McWilliams, who was the first president of CFUW was released at the 2015 AGM in Quebec City and is found here.

Our One Hundred Years: The Canadian Federation of University Women

More than one hundred years in the life of a vibrant organization.

To celebrate CFUW’s centenary, Dr. Dianne Dodd was engaged to write a history of the Federation. This engaging study of a still active women’s organization is more than a centennial history to make its members proud. It also provides a lively exploration of a unique organization founded by early women leaders in higher education who offered friendship, community engagement, and lifelong learning. With a leadership of exceptional women, the organization played a largely overlooked role in the women’s movement by supporting education and the arts, encouraging young women to pursue higher education and scholarships, and through its advocacy initiatives helped to build the Canadian nation. 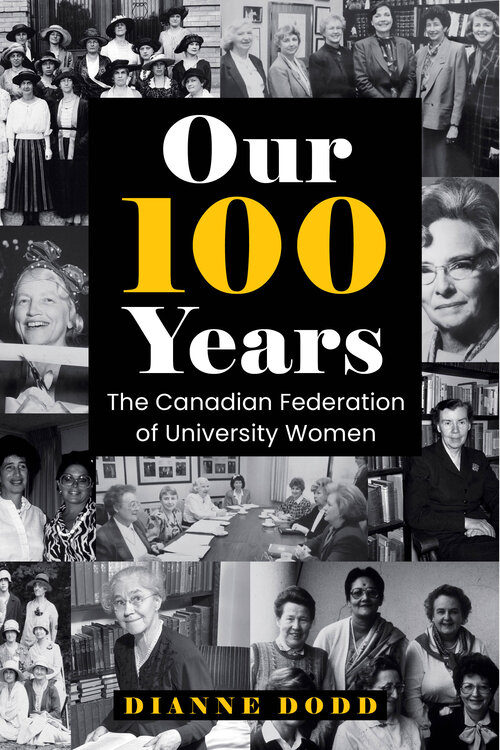 In August, 2011, CFUW received notification from the Honourable Peter Kent, Minister of the Environment, that CFUW has received two awards: