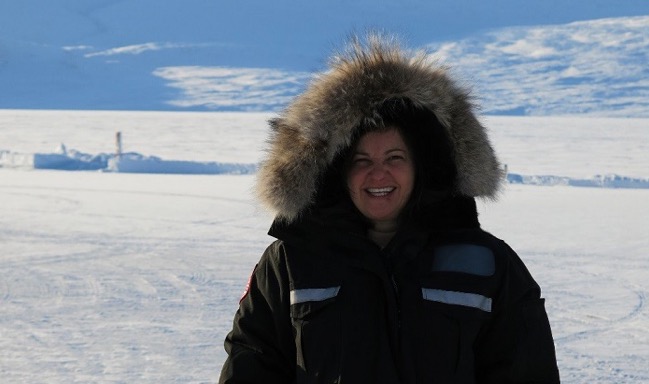 While temperatures dipped to a bone-chilling minus 50 and stinging snow lashed the low, frosted buildings of the hamlet, people made their way on foot through the frozen darkness to the Arviat Wellness Centre to see me. I watched as they slowly made their way up the icy stairs to the door. I was a mental health researcher and a criminal lawyer, and to the people who came to meet me I was an opportunity. They wanted to tell their stories of mental illness and their tales of crime and other difficulties facing their community. They hoped talking to me might somehow improve hamlet life and, importantly, help their neighbours, acquaintances, and even family members who suffer from a mental illness and who may have run afoul of the law because of it. For those who I met, braving a savage blizzard for a chance to talk and to possibly better their community was worth it.

From the first round of interviews for my doctoral study in the remote, Inuit hamlet of Arviat—“Place of the Bowhead Whale”—I understood the remarkable commitment of the community’s residents to the health and welfare of where they live. This was a hamlet of just 2,800 people far from anywhere along a low, wind-swept tundra beach in the Kivalliq Region of Nunavut. But what I was doing mattered to them. Mine was work that just might make a difference.

In Qikiqtarjuaq, a spectacularly situated and traditional hamlet off the eastern coast of Baffin Island, this understanding became even clearer. During a week of interviews for my study in February 2013, news broke that two hunters had been missing on the land for days. An intensive search and rescue effort followed. My research assistant was integral to community efforts to find the missing hunters, and yet, between search and rescue meetings with locals and outside agencies, my assistant made time to organize interviews and calmly interpret for unilingual Inuktitut speaking participants. Remarkably, the hunters were found, their mishap reflected in the apparent frostbite on their faces and hands. The community celebrated with a spontaneous traditional feast. My research assistant was elated and invited me to join them.

These snapshots reflect my efforts to move from the academic pursuit of theory within the limestone walls of Queen’s University, to more applied research in a vast, cold and harsh Arctic landscape of paradoxically, unparalleled beauty. In many respects, my research has its origins in lofty academic ideas about the intersection of mental health and criminal law, many of them born in large American cities, thousands of kilometres from these small, faraway communities in the Canadian Arctic. The common thread in these two stories is the commitment of Inuit to their communities and to the betterment of the lives of people with mental illness caught up in the justice system.

To date, the notion that health science and rehabilitation models developed outside of the discipline of law can help direct and inform responses to people with mental illness in conflict with the law is not well developed in Canada. Yet, the number of people in jail for whom the underlying cause of their criminal behaviour is linked to mental illness is growing. My health science research career is dedicated to addressing this problem.

My doctoral research—funded in part by the generous support of the Canadian Federation of University Women (CFUW)—is an important step along this path. This work, along with upcoming efforts as a Canadian Institutes of Health Research funded post-doctoral fellow at the University of Alberta, will help to develop my health research leadership in this area and provide me with unique expertise for bringing health science scholarship and thinking to an interdisciplinary context to improve our understanding of the nexus of mental health and criminal law.

CFUW researcher awards—including the 2013/2014 Dr. Margaret McWilliams Pre-Doctoral Fellowship and the 2011/2012 Dr. Alice E. Wilson Award—helped make it possible to explore this interdisciplinary theme in the context of Inuit communities in the Canadian Arctic. Louise Adams, Chair of the CFUW Fellowships Committee, managed to track me down in Nunavut to deliver news of the awards. Those personal phone calls are etched in the wintery landscape of my research experience in the Arctic. They couldn’t have come at more opportune times, flagging the importance of my study and providing financial support at critical junctures in my program of research. These awards were undoubtedly helpful in securing multiple awards and in-kind support from other sources, including Queen’s University, the Nunavut Law Foundation, the Arviat Wellness Centre and the Canadian Polar Commission. My doctoral work was also supported through a Social Science and Humanities Research Council Joseph-Armand Bombardier Canada Graduate Scholarship.

The scale of the support undoubtedly reflects the importance of the program. Following the proliferation of criminal court mental health diversion initiatives in large North American cities to respond to disproportionate numbers of people with mental illness caught in the criminal justice system, researchers have recently suggested using underlying “problem-solving court” principles as a means of delivering similar objectives outside of well-resourced, specialized, urban courts. Despite the stated importance of a “rehabilitative response” to criminal court mental health initiatives and to the theoretical approach known as therapeutic jurisprudence that animates them, concepts from mental health rehabilitation research are often little-evident in the literature exploring the development, implementation and evaluation of these initiatives.

Meanwhile, in the Canadian Arctic territory of Nunavut, criminal court mental health diversion initiatives do not exist. My dissertation research explored the potential for delivering the objectives of criminal court mental health diversion to mainly Inuit Arctic communities using therapeutic jurisprudence principles. A qualitative multiple-case study was used to gather and analyze the experiences of justice personnel, health workers, members of community organizations and other community members in three Nunavut communities (Iqaluit, Arviat, and Qikiqtarjuaq). My study found that key considerations for expanding the availability of the problem-solving approach in non-specialized court settings in Nunavut include consideration of acculturation and Inuit mental health. In particular, culturally specific protective factors and issues of identification of mental illness in an Inuit context add additional meaning to the application of therapeutic jurisprudence principles in the Canadian Arctic context.

This research had the benefit of local research assistants and interpreters, informal northern advisers, funders both from the north and south, and a committed team of long-time certified court reporters associated with the Nunavut Court of Justice who transcribed endless hours of interviews. This team’s familiarity with the context of this study, including geographic and cultural references was of immeasurable advantage to this research.

My current program of research, with Dr. Terry Krupa, an expert in community mental health, will continue with a more health policy and health systems orientation into post-doctoral studies with Dr. Kue Young, Dean of the University of Alberta’s School of Public Health. Dr Young, a Senior Investigator of the Canadian Institutes of Health Research, former TransCanada Chair in Aboriginal Health, co-chair of the Arctic Council Human Health Expert Group, is an international expert in Inuit health, circumpolar health systems and health policy. Dr. Young, in the generous spirit of mentorship, has introduced me to the broader circumpolar health research community leading to participation in important and academically challenging international indigenous-related circumpolar mental wellness projects.

As for my doctoral research, detailed results will be available on my study’s website in January 2015 following defence of my dissertation (www.Nunavutmentalhealthcourts.wordpress.com) and through publication of dissertation manuscripts. Results of the study will be shared with participating communities, justice and health professionals, the Government of Nunavut, Health Canada, the Public Prosecution Service of Canada, the Legal Services Board, Inuit organizations and the scientific community. In this connection, I anticipate sharing results in the upcoming 16th International Congress on Circumpolar Health, Focus on Future Health and Wellbeing in Oulu and Rokua, Finland in June 2015.

Finally, this study has given me an appreciation of the importance of culture and the role of Arctic residents in shaping criminal justice mental health diversion initiatives in remote communities in Nunavut.

Publications and Works in Progress:

Back to Past Winners