Past winners of CFUW Fellowships and Awards share their stories 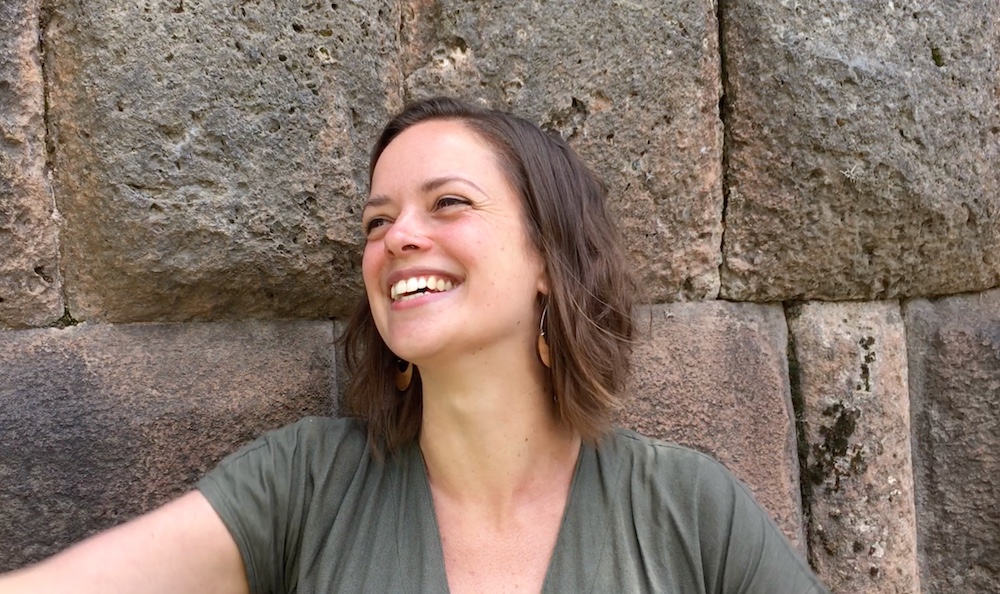 Ashli Akins, from Victoria, BC, is the founder and director of Mosqoy, a charitable organization that works with highland communities of Peru, to promote economic opportunities while nurturing their threatened indigenous culture. She was the 2011 recipient of the CFUW 1989 École Polytechnique Commemorative Award, which supported her thesis research for a master’s degree in international human rights law at the University of Oxford.
By Ashli Akins

Nestled deep in the Incan shadows of the Andean mountains, a woman sits on frozen ground, weaving poetry into cloth by throwing wooden shuttles between hundreds of finely spun threads. The wrinkles in her face, along with her red chapped cheeks, hands, and feet, whisper her wisdom. Her rubber sandals, made of used car tires, carve permanent indentations across her unexposed arches. Her perch overlooks the last mountain of the Peruvian Andes, thousands of metres above the Mapacho River. Beyond this mountain sits the Cloud Forest of the Amazon.

Chicks and piglets scurry around her. Her nine-year-old daughter drops a wooden hand-spindle as if it were a yo-yo, transforming alpaca fibre into usable thread. Watching in awe, she practices on her own huatamas, hoping to one day possess skills as fine as her mother.

Designs flood out of the woman’s fingertips like a song, as she beats her weft to the rhythm of her breath, leaning backward to tighten the weave, then forward to switch the warp. Weaving has given her financial independence. Through her community’s cooperative, she is an active contributor to her familial economy and has a voice in community decisions, despite her gender and language.

It has taken her three weeks to complete this table-runner. Tomorrow, she will hike a full day to sell it at the closest market. If she is lucky, she will sell her masterpiece for forty dollars.

“These textiles are sacred cloth, woven from the threads of memory by Andean hands that are at last firmly in control of their destiny,” writes Dr. Wade Davis, National Geographic explorer-in-residence. “Each tells a story, and each story is a prayer for the wellbeing of the people, the land, and the community.”

So begins my master’s thesis.

Though this timeless tradition has adapted through centuries, it now races against the clock. Unsustainable forms of tourism and development have rapidly encroached on indigenous Quechua subsistence communities, threatening their most important art form.

Weaving is now often seen as nothing more than a monetary exchange between local and tourist – a commodity. Indigenous artisans set up their wares alongside synthetic, machine-made imitations of original masterpieces. They, therefore, cannot sell their textiles at increased prices reflecting fair trade.

Without its weaving tradition, the Quechua language and culture in the Cusco province of Peru could vanish. If youth fail to learn the art from their elders within this generation, the tradition will die with its knowledge-holders.

Discrimination against the Quechua population also plays a distinct role in the loss of this tradition.Illiteracy and incompetence in the Spanish language is associated with lack of education and perceived stupidity. Youth fear association with this stigma; many thus relinquish all ties to their culture, including its language and weaving tradition. But they too battle their own challenges, trying to learn new trades to keep up with the rapidly growing tourism sector; most no longer have sufficient education to be employable.

Most community members see this current dichotomy between economic development and cultural revitalization as an impossible polarity. Rarely, do they feel they have options to sustainably realize both.

As a 21-year-old backpacker in Peru, I learned these stories from weavers and youth who quickly became close friends. They asked me for help. I founded Mosqoy, a Canadian charitable organization, as an innovative solution to respond to these concerns. For the past seven years, I have been acting as its volunteer Executive Director, sharing my time between Victoria, BC, and theSacred Valley of Peru.

Mosqoy, which means “dream” in Quechua, provides a hand-up, not a hand-out. We operate three main programs: 1) A textile revitalization program, to offer fair-trade markets for indigenous female artisans who rely on these weavings for their identity, financial independence, and self-worth; 2) An Andean youth program, that sends the most promising youth of the region to post-secondary educational institutes, so they may later return to their communities as skilled professionals; and 3) A global stewardship program, which educates youth in schools across Canada about how to be responsible travellers and consumers.

Though Mosqoy is a grassroots NGO that relies entirely on volunteer support, it has thus far sent 60 students to university, supported over 150 female artisans, and spoken to over 5000 youth across North America about how to be more compassionate global citizens.

Through my work with Mosqoy, I have learned about and witnessed so many human rights injustices. And I became sick of it. Sick of being an advocate for change, seeing what needed to be done, without having the power to positively affect systemic change.I saw a worrisome gap in translation between communities (and those who work in the field) and policy-makers who have the power to affect change. I wanted to lessen that gap, to become that translator between the two.

This is what brought me to Oxford. I returned a few weeks ago, after graduating with my master’s degree in international human rights law.

My thesis asks if the loss of culturally significant art is a human rights violation, and discusses the various legal mechanisms that protect the freedoms necessary for artistic expression. I focus on vulnerable populations, such as women and indigenous communities, for whom these violations would be most detrimental, and propose tangible steps that artists, communities, and governments may take to better fulfil artists’ rights globally.

In my three years as an Oxford student, I had the privilege of attending seminars, courses, and lectures with the best human rights practitioners around the world, lived in the college where Harry Potter was filmed, and immersed myself in the intellectual history that is Oxford. (The university was established in the 1200s; therefore, scholars studied there when the Incan civilization still inhabited in Machu Picchu!)

The most memorable, however, were the connections. My cohort consisted of students from 26 countries, speaking over a dozen languages. Even a cup of tea made for a stimulating conversation about contested lenses of reality and definitions of justice. Many were like me – women in their late 20s or early 30s who had sacrificed significantlyto live the life of an international human rights worker. These were intelligent, fierce, courageous, independent young women. They reminded me that I chose the right field.

All of this was possible because of the CFUW 1989 École Polytechnique Commemorative Award. I am so grateful to CFUW for giving me the opportunity to study at the University of Oxford.

In May, during an extended layover, I had the immense pleasure of visiting the Guelph chapter of CFUW. Over a delightful summer lunch before I boarded my plane to return to Oxford, we shared our experiences and life stories. And I thanked them, as representatives of all of you. I was thrilled to connect with a few of the thousands of faces who make up the beautiful women of CFUW. I hope that was the first of many reunions.

Thank you, to all of the members of the Canadian Federation of University Women, for investing in young women to be the voice of change. You have single-handedly changed my future. Because of you, I have been able to pay it forward to hundreds of women in need.

And this is just the beginning.

If you would like to read my thesis in full, or for more information on how you can help or get involved with Mosqoy, please contact me at [email protected], or visit our website at www.mosqoy.org.

Note: Portions of this article are excerpts from “In Defence of the Artist: Is the loss of culturally significant art a human rights violation?” Master’s thesis by Ashli Akins, University of Oxford 2013.

Back to Past Winners