“I’ve tried to share my CFUW experience in words and pictures wherever I go, believing that the more we get to know one another, share stories and successes, the more CFUW clubs and members in our federation will feel a kinship among us and all benefit from those experiences.” 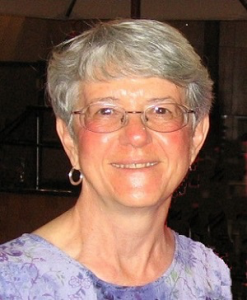 Born in Winnipeg, Susan was adopted when she was one month old. Her parents and a 14-year-old brother each picked a name for this chosen baby. They called her Susan Elizabeth Jane. Susan grew up in Minnedosa, a small community in rural western Manitoba. Early pictures show a very serious looking child with big brown eyes, carefully examining everything around her.

While growing up, Susan’s role model was her mother, Viola, a registered nurse who, when Susan was in grade school, returned to work at a time when most of her friends’ mothers were stay-at-home moms. Vi earned her own money; kept her own bank account, and offered her own opinions in a quiet, polite manner. There was plenty of discussion about current events and important issues at the evening dinner table.

Learning was always a passion for Susan. She was an early and voracious reader obtaining most of her books from the University of Manitoba lending library, as Minnedosa did not yet have a library of its own. Throughout her school years, Susan won awards for both academics and sports and her parents had high expectations that she would go to university.

Susan studied at Brandon University majoring in sociology and minoring in psychology. When she married in 1970 and relocated to Winnipeg, she completed the final three courses of her program there, and graduated from Brandon with her BA. In 1972 she earned a certificate in Education from the University of Manitoba. Neither certification translated directly into a career. On the advice of her father, Assistant Postmaster in Minnedosa, she applied instead to work for the federal government. A pivotal decision!

Susan’s federal career began in the Post Office Department as a casual clerk; from that position there was nowhere to go but up. She worked in transportation, human resources, and accounting, where she developed an interest that continued for the rest of her career. By now, Susan had been single again for several years. When she became the supervisor of accounting staff, she was encouraged to enrol in the Certified Management Accounting (CMA) program. In this department, promotions to officer level, with accompanying salary raises, were based on enrolment in or graduation from this program, and that was encouragement enough for Susan.

On December 31, 1981, Susan married Bob Murphy and became the step-mother of two girls, Shannon and Karen. She continued a seven-year period of attending CMA classes by night and working during the day. Receiving her CMA designation in the early 1980s at a time when only about 20 percent of graduates were women, Susan spent many years working in offices where she was one of a few women, and often the only woman on the management team.

The 1970s and 1980s were times of expansion with many opportunities for women in the federal government. Susan’s career had progressed to managing staff and larger budgets – she was looking for the next step. Her employer, Public Works Canada (PWC), sponsored her enrolment in the Masters in Public Administration program. At the first class the professor’s presentation was incredibly dull. Realizing she needed broader experiences, not more formal education, Susan withdrew from the program overnight.

Another door opened when PWC nominated her for the federal government’s executive training Career Assignment Program (CAP). After successfully completing a gruelling three-day assessment exercise, Susan became part of a group of 12 women and 12 men who spent three months living and training in Red Deer, Alberta. Candidates were required to relinquish their current positions and seek out and negotiate assignments to develop to the executive ranks. In this endeavour, Susan took on an Executive Interchange with the Province of Manitoba to work as a Senior Analyst in the Treasury Board. While Director of Finance, Susan was appointed a permanent employee of the Manitoba Government. She was then appointed Assistant Deputy Minister of Corporate Services in the Ministry of Health.

In the early 1980s Susan had joined the Business and Professional Women’s Club of Winnipeg and as President led them to a membership high of 175 women. She remained in BPW for ten years and then took a hiatus from all organizations for several years. What had attracted her to BPW was getting to know women with different backgrounds and experiences in the community. She had been interested in UWC Winnipeg but, believing that most members were professors, had concluded that her qualifications were not a good fit. In 1996, Susan finally worked up the courage to join. She was accepted, invited to join the Program Committee, and shortly thereafter became the Assistant Treasurer and a Trustee of the UWC Winnipeg Scholarship Fund. Thus began her many years of involvement in CFUW.

In late 1999, Susan was recruited to a health authority headquartered in Nanaimo BC. The position was Vice-President, Corporate Services and in January 2000, she and husband, Bob, relocated to Vancouver Island on Canada’s beautiful west coast.

Upon arrival Susan transferred her UWC Winnipeg membership to CFUW Nanaimo. Early on she was encouraged to join the Executive as a good way to meet members and make friends. That proved to be great advice. In 2002 she agreed to be the club’s Vice-President and then, in 2004, became President for the expected two-year term and also chaired the club’s Scholarship Fund. CFUW Nanaimo had prepared a BC Council resolution in 2004, but since the Council had no Resolutions Chair at the time, Susan was advised that in order for the resolution to go forward, the BC Council needed her to take the position. She accepted and continued as Resolutions Chair for 2005-2006.

From 2006 to 2008 Susan was RD for Vancouver Island, a position that she thinks is one of the best in CFUW. In 2008, she became Vice-President BC and President of BC Council, serving until 2012. During her first term Susan travelled the province visiting every club. In 2009, while she was Vice-President BC, she and a friend, Monika Oepkes, walked 300 km on the Camino de Santiago in northern Spain raising over $4200 for the CFUW Nanaimo Scholarship Fund. This became the impetus for CFUW Nanaimo’s Margaret Strongitharm Memorial Award, commemorating Margaret’s CFUW accomplishments as National President.

The next stage in her CFUW leadership took her to the National Office when she became the National President, serving from 2012 to 2014. At this time, she was appointed as a Trustee on the Charitable Trust, a position she continued after her presidency.

Susan has been fortunate to attend three IFUW Triennials: Manchester 2007 and Mexico City 2010, as alternate and delegate, and the third, Istanbul 2013, as CFUW President when she led the CFUW delegation of 30 members. In 2013-2014, she was CFUW Vice-President International (formerly CIR) and headed the CFUW delegation to New York for the UNCSW. On both these occasions, she held planning teleconferences with delegates and coordinated the publication of two special CFUW newsletters.

Following the approval in 2012 of new CFUW bylaws, Susan’s Board of Directors revised internal policies and wrote and approved a new administration manual. The first national elections under the new Industry Canada rules were held in 2014. All nominations were posted on the CFUW website as they were received, and all members were given the opportunity to “express an interest” for committee and chair positions.

Susan loved working with the talented women on the National Board, the RDs, and Committee Chairs. During her presidential term a new format for AGM and Conferences was established. For Kitchener Waterloo’s conference in 2014, Friday became a full Learning and Development Day, followed by the AGM business and plenary sessions on Saturday and Sunday. For the first time, delegate registrations included an opportunity to donate to the CFUW Charitable Trust and/or to help a fellow member attend the AGM.

Her CFUW Board initiated a modernization project including approval of a new masthead, colour scheme, and the tag line, “The Power of Women Working Together”. The Board’s work was directed by five strategic aims: membership, scholarship and fellowships, advocacy, sustainability, and public profile. RDs led a national club survey, “New Beginnings” obtaining a 95 percent response rate. The results from the survey will inform the organization going forward. To focus the work of the Board and National Office, four advocacy priorities were chosen: Women and Education, Women and Leadership, Violence against Women, and Women and the Economy.

During her term as CFUW President Susan travelled extensively, taking photos and posting regularly on CFUW’s Facebook and her personal pages. By highlighting activities countrywide and internationally, for the first time members were able to watch news as it unfolded. Feedback to this initiative has been enthusiastically positive.

As CFUW moved toward its 100th anniversary Susan helped to help kick off the campaign to raise an additional $100 000 for scholarships and fellowships. During the late summer of 2014 she and her Camino walking friend Monika completed a 22-day, 500 km trek to Santiago de Compostela. With support of clubs, members, friends and families, the pair raised nearly $18 000 for the Charitable Trust. CFUW chronicled their walk as did The Globe and Mail in a column called “Giving Back” (Waldie).

Susan has been an active volunteer, Board member, and donor in many organizations. She plans to continue these activities in the foreseeable future.