“Out of the disappointments of our post-war hopes for a united world has been born a desire to understand causes and to share in a remedy.” 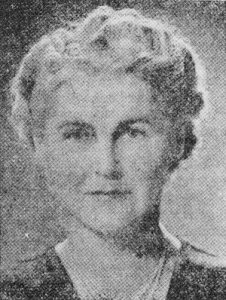 The words quoted above mark the presidency of CFUW’s tenth President, Ruth Elizabeth Crummy who was born in 1895 in Niagara Falls, Ontario, to Frank and Sarah (MacMurray) Harrop. Frank was a teacher and likely inspired his children, Ruth, Esther, and Alan, to pursue education with the goal of attending university. When the family moved to Alberta to take up farming, Ruth and Esther stayed in Ontario to finish school and begin teaching. Ruth attended Queen’s University in Kingston, graduating in 1918 in English and History. Her artistic talent was recognized as she is reported to have received a silver medal in Art at the University of Chicago.

Ruth had a lively personality and a genuine interest in her fellow human beings; in today’s world she would be called a people person. She taught school in Alberta for several years before meeting and marrying Richard B. Crummy from Hamilton in 1925. Richard was a WWI veteran and a high school English teacher. They moved west to Vancouver where they enjoyed gardening, among other interests. The couple had no children.

After her marriage, Ruth, following the custom of that era, gave up her teaching career and became an enthusiastic clubwoman. In Vancouver she helped found the Community Arts Council and was active in many other organizations, among them the Women’s Musical Club, the Vancouver Art Gallery, the Vancouver Council of Women, and the Vancouver Symphony. She also served on the boards of the Children’s Aid Society and the Community Chest. Always warm and friendly, she was very much aware of what was happening around her, both locally and abroad.

Ruth joined UWC Vancouver in 1928, making many new friends among the membership and chairing the Child Study Group in 1935. She served on the club’s Board
of Directors for two years before becoming Club President for the term 1942 to 1944.

The world had been at war since 1939 and Vancouver club members were kept busy knitting and sewing for the Red Cross, and supporting the Canadian Navy and the Merchant Marine. The club minutes record several changes because of the war. On November 12, 1940, for example, the Vancouver club voted to invite as (non-paying) guests, woman graduates who were evacuees from their homes in other countries.

In 1943, the Vancouver club recorded its highest membership total to that date: 251. In her Triennial report given to CFUW in 1949, Ruth noted a similar increase in membership across the country, commenting that the largest increase ever recorded for the Federation took place during this time which she regarded as an indication of “solidarity and a recognition of worth” for the organization (15).

In 1946, a year after the war ended, Ruth was approached to run for President of CFUW and was elected in September 1946 for a three-year term. During her presidency, Ruth travelled extensively on behalf of the Canadian Federation, holding two executive meetings, one in Toronto following the 1947 IFUW Conference and one in Halifax in 1948, the first ever in the Maritimes. She visited many clubs during her three years (some twice), and viewed these visits as a valuable opportunity to explain CFUW to new clubs, to discuss the problems and activities of officers and clubs, and to seek ideas for the future development of CFUW.
Many innovations were introduced during Ruth’s presidency. These included the awarding, each year, of a scholarship for post-graduate professional study (as voted at the 1946 CFUW Triennial Conference). In the same year, following consultation with the Canadian Library Association, CFUW established the awarding of a grant of $350 to go to a library in a rural area for stimulation of children’s reading. A library in Brandon, Manitoba, received the first award (Crummy 17-18). This Reading Stimulation Grant continued from 1946 to 1994 when the grant went to Read Up On It, a National Library review of Canadian children’s books based annually on a theme related to school curricula. After several changes the grant continued as the bi-annual CFUW Libraries Award created March 2013. In 2014, the first award of $4000 went to Annapolis Valley Regional Library, sponsored by CFUW Wolfville.

Other efforts under her leadership included the setting up of committees to study resolutions; to list special honours to CFUW members; to promote study and action regarding Canadian Penal Reform, and to consider the establishing of a permanent CFUW office. The introduction of CFUW membership cards to all paid up members was welcomed and proved valuable to members when travelling (CFUW 73). Ruth was particularly proud of the role CFUW played in the conferring of an Honorary Doctor of Letters, DLitt, by the University of Toronto in 1948 on CFUW’s first President, Margaret McWilliams, to recognize her contribution to Canadian life (CFUW 72-73).

Ruth’s main focus was, as it had been for many years, on education. She believed that there was a wide scope for university women in showing an interest in the whole field of education, and with a stronger voice directing their efforts toward tangible results. In keeping with this view, in 1947, Ruth’s home club, UWC Vancouver, along with a number of women’s organizations, including the Vancouver Council of Women, the Business and Professional Women’s Club (BPW), the Soroptimist Club, and the Panhellenic Association, promoted the establishment of a residence for women at the University of British Columbia. As a result of their efforts, $650 000 was granted to the university for construction of three residential units, the first of which was opened in 1951, and the last in 1961.

Ruth was an avid supporter of IFUW and had the honour of representing CFUW at the first post war IFUW Triennial in Toronto, August 1947. She was an ex-officio member on committees and welcomed delegates and observers from 29 countries, including 21 delegates and 150 members from Canada. CFUW’s first president, Dr. Margaret McWilliams, was one of the main speakers. The greatest distinction for CFUW at the conference was the election of a Canadian, Dr. A (Allie) Vibert Douglas, as President of IFUW. Four other CFUW members were appointed to IFUW committees. Ruth viewed this experience as an opportunity for “friendships, understanding, opportunities for service, and a concrete incentive to our study of international affairs – to a more conscious internationalism” (Crummy 16). These opportunities were spread across a large part of the country as many clubs enjoyed visits from IFUW delegates both before and after the conference.

Other activities to further international relations carried out by CFUW clubs during Ruth’s presidency include providing extra money for the International Fellowship Fund and support of the restoration of Crosby Hall, the IFUW club House in London, England. Hundreds of pounds of food and clothing were sent to war-depleted countries, and hospitality and assistance were given to many university women displaced by war. Connections with the American Association of University Women (AAUW) were strengthened with exchanges or joint meetings of CFUW clubs with American clubs, especially at border points. In June 1949, Ruth was a guest of the members of the AAUW at their Biennial Convention in Seattle, where she brought greetings from CFUW to 1700 American delegates as well as to the President of the Mexican Federation, also attending as a guest.

Ruth passed away in 1983, in Victoria, BC, after a very fruitful and productive life. Her dedication to service to others and the furthering of education continues today in the form of the Ruth E. Crummy Scholarship at Queen’s University. This scholarship was initiated by her brother, Alan, to be awarded on the recommendation of the Department of English to a student of high standing, entering the second year of a program with a concentration on English.