“Networking and sharing with one another builds the strength of CFUW. Much energy that drives organizations is generated when people connect with one another. It’s when you make these connections that you commit to helping each other, and begin to plug in your ideas and resources. That’s when the creative sparks start to fly.” 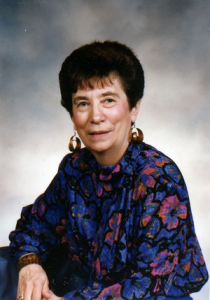 Born July 15, 1938, in Riverhurst, Saskatchewan, to Manley and Annis (Crowley) Birch, Mavis Birch Moore was a prairie farm girl and proud of it. She was raised on the family farm near Lawson with her sister, Judy, and brother, Doug. A sickly child, Mavis developed a love of books and a thirst for knowledge at an early age. As a member of the 4H club in her township, her uncanny ability to judge the quality of grain was recognized and this resulted in travel all over the province. She won a trip to the Canadian National Exhibition as a result, but when the organizers discovered that she was only 12, she was declared too young and the prize-winning trip to Toronto never took place.

Mavis went to school in Lawson and later boarded at the all-girls’ secondary school, Sion Academy, in Moose Jaw. Not long after leaving school, she got a job at the hospital in Saskatoon, married Albert Moore, and had three children. After the marriage ended, she worked towards a BA in history and criminology at the University of Saskatoon completing courses while also holding down a full-time job and keeping the family together. Chores were assigned to the children according to their ages. She remembered coming home from her shift on one occasion to find that they had re-assigned the job list and that the littlest one was in charge in the kitchen.

She recalled working at the Regional Psychiatric Centre for the criminally insane [sic] in Saskatoon. One summer four young children were murdered in Saskatoon and Mavis was present when the murderer was brought in. Feelings were running high among the people in the area and she said it was considered it to be close to a lynching scene.

Mavis joined CFUW Saskatoon Inc. in 1985. She was dragged [sic] there by two friends who thought that she might enjoy it since even as a child she had been interested in advocacy. During WWII she had canvassed all the neighbours asking them to buy war bonds to support the war effort, and ended up on the radio news as a result of her efforts.

When the 1989 AGM was awarded to Saskatoon, she became involved in the national aspects of CFUW. She worked with the local team to pull off a truly prairie-focused meeting. Mavis was President of CFUW Saskatoon Inc. from 1990 to 1992. She subsequently served on the CFUW Board from 1994 to 1996 as both VP Prairies and the RD for Saskatchewan. For the term from 1996 to 1998, however, Mavis continued as VP Prairies only.

The early 1990s was an interesting time for advocacy in CFUW since the focus was on such gritty issues as gun control, landmines, tobacco, and health care, all of which appealed to Mavis. While she knew how to hunt, this prairie woman was a strong advocate against unlicensed access to firearms. An incident after her father joined the army in the 1940s leaving her mother to run the farm in his absence may have influenced her strong stance. Mavis recalled the terror of her four-year old self – staring at the wrong end of a rifle when a neighbour threatened her and her mother.

Mavis’ enthusiasm for advocacy caught the attention of Betty Bayless (President 1996-1998) who became her mentor and guide and encouraged Mavis to run for the position of president putting her talents for advocacy at the disposal of CFUW. During Mavis’ presidency (1998-2000) the necessity arose to hire a new Executive Director. She involved the entire Board in revising the job description and the selection process to accommodate the needs of the organization. Under Mavis’ guidance the Board decided to hire an individual with strengths in networking and advocacy in order to put CFUW on the map with other organizations and with Government and Opposition members.

She was a President who worked full-time, continuing her job as ward clerk at the Intensive Care unit of the hospital in Saskatoon. In spite of doing shift work she was always available to CFUW for consultation and decision making as well as to work closely with the Executive Director.

In her AGM address in Calgary, 1999, speaking to the theme “Share the Vision, Shape the Future”, Mavis called for “CFUW clubs to become more visible and for university women to use their education to effect change” (Driscoll). She was committed to the idea of using education to help others and wanted CFUW to build on that role. She envisioned CFUW as an expanded organization fully involved in all aspects of Canadian life and was in favour of working in coalition with other groups having similar goals.

Mavis honed her skills through her political involvement in social justice issues and throughout her presidency she advocated for gun control. She made sure members were aware that “statistics indicate that in domestic violence, guns are often the weapon of choice. The victim is either intimidated or killed” (The Communicator 5.4). Mavis talked with great affection of members of her Board, and especially of the visits to the House of Commons, with Barbara Himmel, Sheila Laidlaw, and Executive Director Susan Russell. Under Mavis, the practice of “A Day on the Hill”, used so well by her immediate predecessor, Betty Bayless, was continued and expanded. Board Members attending a CFUW Board meeting in Ottawa would go to Question Period and visit their own MP or just take a tour of the House.

The week of consultations with government were, however, more involved. This process started under Margaret Strongitharm, was developed further by Linda Souter, and was continued by Mavis. During the week of interviews with politicians the President, Executive Director, and Committee Chairs presented CFUW’s Brief to Government. CFUW found that the March meeting was too late in the Parliamentary year to be effective since budgets were set by then, and people were preparing for summer recess. As a result later meetings tended to be held throughout the year, when they could be arranged, and were scheduled with all parties.

The role of consulting with the federal government “grew from an annual meeting to year-round consultations with many departments. [CFUW began] to have meaningful dialogue with the Organization of American States through the Department of Foreign Affairs and International Trade.” The profile of CFUW increased and membership grew slightly. Mavis felt that “Being pro-active has produced positive results and must continue if CFUW is to be a viable, reasonable, respected women’s group speaking out for the rights of all” (The Communicator 6.7).

Mavis told CFUW members of her experiences at the UN: “It was my privilege to be one of four women representing non-governmental organizations (NGOs) on the official Canadian government delegation to the 44th session of the UN Commission on the Status of Women (CSW), February 28-March 17, 2000 in New York. . . . This meant that I was part of the government team negotiating the wording for the final document at the Beijing Plus Five meeting in June 2000” (The Communicator 6.7). This experience provided great insight into how the UNCSW functions and the necessity of collaboration and cooperation among members of the delegation and other governments to ensure that decisions affecting women are beneficial to them.

Her biggest contributions to CFUW were the fair and rigorous process used to hire the Executive Director, the follow-up review process, and her frank and open encouragement of advocacy and the advocacy process. Mavis believed “CFUW must become relevant to the world of the 21st century; taking pride in our past but continuing to expand our membership and our role in society” (The Communicator 5.1). Like Betty Bayless, who preceded her, and Roberta Brooks, who followed, she felt very strongly that the President should not necessarily become the CIR, a practice that had become the norm.

Looking back on her presidency, she said that her best moment occurred at the AGM in Calgary when she was greeted by representatives from the City, presented with a Stetson, and made an honorary citizen of Calgary. “We worked hard and we were involved passionately in the issues of the day,” she reminisced.

Mavis was a social activist her entire life. She was a member of the Co-operative Commonwealth Federation – precursor to the NDP, was active in fighting for women’s rights and equality, and was CFUW’s western resource on Gun Control and advocate for the Gun Control issue. In addition, Mavis served on the Saskatoon Citizens Advisory on Transit, the Saskatchewan Legal Aid Commission, and the University of Saskatchewan Senate.

She believed that she was part Sami and enjoyed getting in touch with her Viking roots as a member of the Sons of Norway. Mavis loved the prairies, meadowlarks, cattails, and crocuses. Her interests included knitting, cats, and history. Mavis talked of her two granddaughters with pride saying that the eldest was going into newscasting at Dawson College.

Mavis passed away at home on November 9, 2013. To honour her CFUW involvement her family requested that donations in her memory be made to the CFUW scholarship fund.