“A cultured woman never makes a noise in a public place except in a great cause.” 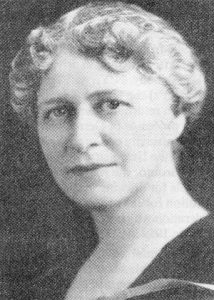 The third President of CFUW, Mary Louise Bollert, was a woman with a strong social conscience and a life-long commitment to educational work and issues of social welfare and international peace. Usually referred to as Minnie or Minnie Louisa in her early life, she was born in Guelph, Ontario, the eldest of the five children of Ernst Robert Bollert and his wife Malinda (Bowers). As is the case with many of the dates in Mary’s life, her actual birth year is uncertain but handwritten notes on the backs of photographs in her fonds at the University of British Columbia would indicate it to be close to 1879 (How). Mary was born into a family of standing and substance. Her maternal grandfather, Cyrus Bowers, a Mennonite farmer who had immigrated to Canada from Pennsylvania, gave each of his three daughters a house as a wedding gift. He held elected office in Waterloo Township and maybe it was he who sparked Mary’s interest in politics. Mary’s father was born in Prussia and emigrated from there with his family to Waterloo Township. Later he established himself as a general merchant “doing a very large business” (Eby).

Mary attended Guelph Collegiate Institute and then studied at Victoria College in Toronto. She obtained a BA (Honours in Modern Languages) in 1900 before completing a graduate degree there. The May 1900 Yearbook, Acta Victoriana, called her “one of the most all-around girls that has ever left college halls” and went on to say with great prescience, ”Her special talent lies, perhaps, in the charming ease and grace with which she can express her thoughts in public, whether at oration contest, reception or senior dinner” (“The Graduating Class”). It is interesting to note that she graduated in the same class as the fourth CFUW President, Mabel Chown Thom.

Mary also studied at the Ontario Normal College, and in 1908 obtained an additional graduate degree, an MA (English), from Columbia University, New York. During this period, she held various posts: Principal of Alma College in St. Thomas, a teacher at two high schools, and at Teacher’s College, Columbia University. Following her return to Canada she took up the post of Dean of Women and Professor of English at Regina College in Saskatchewan, likely from 1914 to 1917, but again the dates are not clear. It appears that she was the Director of Education and Social Work at the Robert Simpson Company in Toronto at some point before 1917 as it was in that year she accepted the additional role of Superintendent of Sherbourne House, a residential club for businesswomen in Toronto. We know that Mary’s sister, Florence Bollert, started at Sherbourne House as Mary’s Secretary in 1917 and succeeded Mary as Superintendent, serving in this position from 1921 to 1946.

These experiences had prepared Mary for the role for which she would be remembered, Dean of Women at the University of British Columbia. During WWI, the number of female students studying there gradually became greater than that of men. The Faculty Women’s Club, UWC Vancouver, and other women’s organizations began lobbying for the establishment of a proper environment for young ladies on campus. When, in 1921, the university appointed Mary Louise Bollert as the new Advisor of Women and Assistant Professor of English (Coates 27), the president made it clear to the female students that Mary was meant to be a counsellor to women. Mary was not permitted to discipline them or advise them on their academic studies, those areas being the exclusive province of the academic deans. At this time, the university’s Deans received an annual salary of between $5500 and $7500 while Mary was hired for an initial period of three years at the annual salary of $3000 (slightly above the minimum salary that could be paid to an Assistant Professor).

Although the university reclassified her position to Dean of Women in 1922, it was a change in title only. Unlike the other Deans (all male), she was not automatically given an ex officio seat on the University Senate. This meant that she had no say in new courses of study that were being developed, even those designed specifically for women. Perhaps Mary was reluctant to run for Senate as she felt hampered by her lack of a doctoral degree (the second Dean of Women, Dr. Dorothy Mawdsley, certainly thought so). Leading clubwomen in the community insisted that she stand for election to the University Senate and her victory in June 1933, allowed her to overcome many of the limitations to her post. She served as an elected member of the Senate until her retirement from the university in 1941.

Mary took her duties as Dean very seriously. She knew that she stood in loco parentis and felt responsible for the moral guidance of her students. Former student, Elizabeth Stubbs, writes that “the Dean stressed that we were never to forget that as university women we were ladies and therefore good manners, conservative dress – NO trousers, NO ankle socks – and propriety in all phases of behaviour were important” (Stewart). Mary felt obliged to speak to her students about their dating behaviour. A puritan by nature, Mary did not find this an easy task. She addressed this issue by adding one final sentence to her annual talk to her new first-year students: “Now ladies, never feel sorry for the poor boys” (Stewart). This veiled reference to sex was missed by many of her audience who thought that she was referring to young men struggling to finance their studies on a limited budget.

Some of Mary’s students recalled that she was a “gentle soul”; “a gracious and sympathetic counsellor to female students”; “a large, fine-looking woman with a gracious manner who became my kind friend” (Stewart). Others recalled that she had supplied financial aid, which they suspected had come out of her own pocket. During the difficult years of the Great Depression she was said to have found jobs for some girls and even paid a medical bill for one student.

Mary had been addressing the need for a women’s residence as early as 1922, maintaining that a residence “is more to a student than a roof and a bed . . . it offers training as valuable as the classroom” (Stewart). The university finally built residences for women in 1950, naming one Mary Bollert Hall in her honour. Bollert Hall was renovated for office space in the early 1970s and now serves as the Development Office of the University.

As Dean of Women, Mary was a very visible member of the university community, giving speeches, attending many public functions, fundraising, and travelling widely. Author Lee Stewart writes “She [Mary] was primarily distinguished by her role as a liaison between the university and the larger community, especially women’s associations . . . She believed that it was women’s greatest duty to sway public opinion. To this end she worked in international peace organizations between the wars.” Mary was one of two women representing Canada at the Institute of Pacific Relations in Honolulu in 1926. In 1933, she was a speaker at the International Congress of Women in Chicago and in 1934 she was one of 12 North American deans of women selected to tour Japan as a guest of the Japanese YWCA (Coates and Berton 27). At the time of her death she was International President of the Pan-Pacific Women’s Association, a post to which she was first elected in 1937.

Mary was keenly interested when UWC Vancouver joined CFUW in 1922. She was elected President of CFUW in 1926 and served until 1928. Her term was shortened to two years in order to accommodate IFUW. Incoming president Laila Scott explained what had happened in the “Foreword” to the 1928 Chronicle:

When IFUW decided in 1926 to hold its conferences triennially instead of biennially, it was found that our Canadian Conference and the International Conference would occur in the same year. It was felt that this should be avoided if possible… [and] as it seemed unwise to defer our next meeting for four years, it was decided by the Executive Committee in August 1927, that the Fourth General Conference of [CFUW] should be held in 1928. . . .” (9)

During her two-year presidency, Mary Bollert’s prime concern was education and international relations. She asked the university women of Canada to consider practical problems such as: supplying funds to students of ability in need of financial assistance; helping university women to find work for which they were qualified; working for higher salaries for teachers, and seeking special opportunities for the gifted child. Under her leadership CFUW urged the appointment of women to boards and commissions of the League of Nations. Mary was a Canadian delegate to IFUW in Paris in 1924, in Geneva in 1929, and in Edinburgh in 1932. After her term as National President of CFUW, Mary served as President of UWC Vancouver (1929-1930). She also worked with the club to found Parent Teacher Associations in the schools in Vancouver.

Mary was a charter member of the Soroptimist Club of Vancouver; Vice-President of the Board of Directors of the Student Christian Movement (SCM) at her university, Honorary Secretary of the Women’s Canadian Club; a member of the Women’s Christian Temperance Union, and a member of St. Andrew’s-Wesley United Church in Vancouver. Retirement from the university did not diminish her interest in politics and she ran (albeit unsuccessfully) as the Liberal candidate for the Vancouver-Point Grey riding in the provincial election of 1941.

Mary died in Vancouver on July 31, 1945, and is buried in Mountain View Cemetery alongside her parents and siblings. Her grave-marker does not indicate her date of birth.