“The Federation is you, not your club executive or your national board, but you the members. And it is as strong as the fibres of its network in both horizontal and vertical directions.” 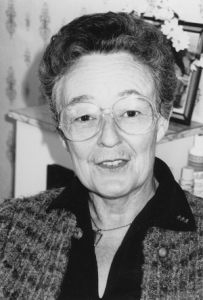 Margaret Knox (Peggy) Matheson was born in Toronto and raised in a family where academics were of prime importance. Her father, Thomas Forsyth McIlwraith the first academic anthropologist at the University of Toronto had done much of his fieldwork among the Bella Coola people of British Columbia. Peggy’s mother, Beulah Knox, was an active member of UWC Toronto.

Peggy graduated with her BA from the University of British Columbia in 1954 with First Class Honours in psychology. In 1954 she married Murray Matheson, a geographer and they settled down in Victoria, where Peggy worked with the Victoria Family and Children’s Service as a social worker with responsibilities for foster children and protection cases. She left work to raise their two children and when they were in junior high school, she returned to work for a short while with the Canadian Mental Health Association. Later, Peggy joined the staff of the Greater Victoria Art Gallery as manager of the gallery gift shop. She and her husband, Murray, were minor partners in a bookstore in the Victoria area for several years.

In 1955, with the encouragement of her mother and Dr. Martha Law (CFUW President 1952-1955), Peggy joined CFUW Victoria. Her mother had made many lasting friendships within her club in Toronto, and Peggy quickly found this to be one of the best benefits of membership in the Victoria club as well.

Peggy’s first responsibility on the executive of CFUW Victoria was as Study Group Convenor in 1961-1962. She was appointed Federation Representative for 1971-1972 and while holding this position quickly learned more about the influence of CFUW within Canada as well as internationally. In 1973 she attended the CFUW Triennial in Ottawa – the first of many national conferences she attended. In the spring of 1975 she was elected President of the Victoria club and held this position through 1977. During this time she advocated successfully for the creation of the CFUW Victoria Scholarship and Bursary Society. This society continues to fund a large number of awards annually.

Peggy expanded her knowledge of the international scene when she became a key member of the Steering and Planning Committee for the Asia-Canada Women in Management Conference held in Victoria in June 1985. The conference was sponsored by CFUW in conjunction with CIDA and IFUW. Women with demonstrated capabilities in business, management, leadership, and entrepreneurial skills from Canada, Asia, and around the Pacific Rim met for three days to hold workshops, present papers, and learn from each other’s experience. The conference was a huge success and opened the way to greater understanding and cooperation.

Another undertaking in 1985 was the preparation of significant amendments to the CFUW Constitution and By-Laws on which Peggy and another Victoria club member worked together. Peggy attended the 1985 CFUW Triennial in Calgary and was appointed Chair of the National Committee for Constitution and By-Laws. In 1988 the current Biennial structure was adopted and Peggy was responsible for preparing and presenting the many amendments to the constitution in order to adopt the structural change.

Moving to a Biennium resulted in three major changes within the governance and organization of CFUW on the national level: CFUW would now hold an Annual General Meeting (AGM) with the ability to establish policy annually instead of every three years; Board members would be elected and hold office for a two-year rather than a three-year term, and the number of Vice-Presidents was raised from four to five with the addition of a VP for British Columbia. Peggy went on to become the first CFUW VP British Columbia. During her term from 1988-1990, the BC Council was established and the first BC Council AGM was held in Prince George. The first CFUW AGM under the new governance structure was held in Edmonton in 1989.

Peggy has the distinction of being the only CFUW President to serve two consecutive terms. In 1990 she was elected National President and, in 1992, she was re-elected for a second term. During these two very busy terms she visited almost every club and Provincial or Regional Council across the country. Furthermore, she attended two AAUW conferences, one in Portland and the other in Minneapolis. On a second trip to Minneapolis, Peggy was asked to take part in an AAUW roundtable discussion on health issues where she presented a well-received paper about Canada’s health care system.

She led the Canadian delegation to the IFUW Triennial Conference in Palo Alto, California, in 1992. She was invited to represent CFUW for the launch at the Kennedy Space Centre of the Space Shuttle Discovery that propelled into space Dr. Roberta Bondar, Canada’s first female astronaut. Dr. Bondar is now an honorary member of CFUW.

A major project during Peggy’s term as President was a study entitled, Women in Universities – A Survey of The Female Faculty and Students at Canadian Universities. This resulted in the creation of a valuable profile of a “woman-friendly” university. The survey results contained surprises for many who were unaware of the existing concerns. Analysis of the responses showed that young women at university might need assistance in many different ways and, furthermore, challenges faced by women employed in post-secondary education were recognized. The survey proved to have an ongoing influence. The report went into a second printing and the summary of the report’s recommendations, The Profile of a Woman-Friendly University, was widely circulated.

During her first Biennium, the theme “Time to Care” addressed new directions in health care, threats to the environment, violence against women, status of women on university campuses, and methods of increasing CFUW membership. All standing committee chairs were encouraged to incorporate “Time to Care” into their programs. From 1992 to 1994, Peggy’s second term, the theme “Visions for the Future” focused on membership, reminding members of CFUW’s capacity to provide training in leadership and mentoring skills and its experience in putting these skills to excellent use.

Peggy always appreciated the support she received from Board members and the Executive Director. Elizabeth Cureton worked with her in promoting CFUW and on tasks related to Board and AGM decisions. Elizabeth was the last person to hold the title of Executive Secretary and the first to be named Executive Director, a position she filled very ably . Peggy had the title changed to Executive Director to better reflect the role and what CFUW expected of the person who held it. With the permanent head office in Ottawa and a President not always available in person, it was vital that the Executive Director be able to represent CFUW at local meetings and events.

In the final “Letter from the President” of her second term in 1994, Peggy touched on several important issues that CFUW had dealt with during that period. She started with “the privilege of meeting with government officials both elected and appointed” and encouraged members of CFUW to continue to promote their policies in the political forum. She stated that CFUW is respected both for its policies and the consensus procedures by which they are established, and she warned that the opportunity of discussing them with government personnel should never be taken for granted. She also said in reference to the study and report on Women in Universities there was still a great need for vigilance on campuses and a role for organizations such as CFUW to play.

One of Peggy’s greatest challenges during her presidency was CFUW’s reluctance to promote itself to the public. Internally, The Communicator included a letter from the President, news submitted by clubs, international items, reminders of upcoming CFUW events, and articles of general interest to the membership. However, raising CFUW’s public profile was an ongoing challenge. Peggy noted that, while it is no longer regarded as an elitist organization, CFUW’s activities and contributions as advocate for the rights of women and girls are not fully recognized and appreciated on the local, national, or international scenes. Most recently (1916) and award has been made in Peggy’s name by CFUW Victoria and the United Way of Greater Victoria to provide funding for a woman working towards a degree in indigenous studies at Camosun College, Victoria.

While representing CFUW as its president, Peggy blew CFUW’s horn as widely and loudly as she possibly could and she continues to do so, setting an example for other members. Within the organization and the community she continues to encourage women who share CFUW’s beliefs and ambitions to support CFUW even when they are not in a position to play an active role.

In 2010 Peggy was made a Life Member of CFUW Victoria.