“You don’t need to hire a hall to think. The place to start is right in your own community. Being a woman does not excuse one from citizenship.” 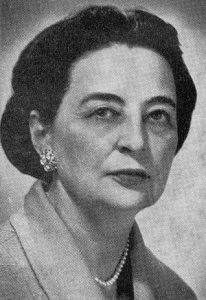 Margaret, or Pegi, MacLellan has been described as a generous spirit with unbiased judgement, charm, a sense of humour, respect for detail, and endless capacity for work. She made these qualities and her remarkable dedication available to CFUW for many years. Three decades before she became National President, she had already guided the Ottawa club from 1952 to 1954 as President, and served on national CFUW Executives, as well as on several IFUW committees. As a result, she had a well-developed global perspective on the role of the modern woman and her place in society.

Because she had the ability to hold an audience and, with her fearless outspokenness, make even the most prosaic topics interesting, she was in great demand as a public speaker. Her interests were broad, ranging from the status of women to libraries, the Elizabeth Fry Society, penal associations, the United Nations, consumer organizations, and the theatre.

Born in a manse outside Dresden, Ontario, in 1899, she was a good student, and continued her studies at the University of Toronto, graduating in 1923 with honours in philosophy, English and history. Her life was balanced there with participation in the Glee Club, a literary club and the SCM.

Margaret began her career teaching classics and English Literature in Ontario secondary schools, after which she joined the Federal civil service in Ottawa. She began as a research and editorial writer with the Dominion Bureau of Statistics and went on to become research librarian and supervisor with the Combines Investigation Section of the Department of Justice. Before retiring in 1968, she had achieved the position of Senior Combines Investigation Officer.

Throughout her life, Margaret remained steadfast in her mission to expose discrimination against women. Her quest for equity went beyond her government work, and although she was not trained as a lawyer, her spare time was occupied with legal and social justice issues in their widest context. In 1953 she became a founding member of the Canadian Committee on the Status of Women. She chaired CFUW’s Administrative Procedures Committee and the Resolutions Committee and from 1954 to 1961 she headed the CFUW Status of Women Committee. In 1959 she was appointed to the Legal and Economic Status of Women Committee of IFUW where she served for nine years and earned great respect internationally. By 1967, she had completed a detailed study of Canadian women’s prolonged struggles to achieve recognition in such fields as medicine, law, engineering, and science. This report, “History of Women’s Rights in Canada”, was submitted by CFUW to the Royal Commission on the Status of Women in 1967, and in 1971 was included in Volume 8 of the Studies of the Royal Commission on the Status of Women.

In the “Conclusion” to this report Margaret wrote:

We can reasonably expect that the slow sporadic pace of women’s rise to responsible positions of decision-making and administrative leadership will gradually be accelerated and that in another 40 years [that is, by 2007] Canadian women will have entered the 21st century with a new dimension in their thinking, free from cultural residues from the past and ready to grapple with the problems and opportunities of the future. (“History” 27)

Earlier in her 1958 report of the Status of Women Committee to CFUW members, Margaret had issued a battle cry:

It is well to keep in mind that changes in existing legislation . . . are rarely initiated by the authorities charged with its administration. Such changes, when for the better, are nearly always brought about by small minority groups whose members are prepared to devote much time and effort to effecting the improvements they believe are in the interests of the public good. (The Chronicle 1959-60: 99)

Her report contained information on the work of the Status of Women Committees at both the national and club levels. CFUW actions, projects and concerns under study included: succession duties and estate tax, jury service for women, the new Estate Tax Bill, the legal and economic status of women, and discrimination against women workers. In the same report she acknowledged, for example, that “the London club, through the efforts of one of its members, was instrumental in having rescinded a by-law prohibiting the employment of married women by the city (101).

Margaret’s early attention and sympathy was claimed by women in prison. One of five CFUW volunteers to visit jailed women in Ottawa in 1951, she became a founding member and later president of the Ottawa branch of the Elizabeth Fry Society. She also held posts on the Society’s Advisory Board and Provincial Council, and executive positions with the Canadian Penal Association as well as the Canadian Corrections Association. This commitment should come as no surprise, for her first office in CFUW was chair of its Penal Reform Committee. In a memorial tribute to Margaret in The Chronicle Betsy Boyce wrote:

If we treat women prisoners more humanely than we did 25 years ago, if they have an opportunity to employ their time more constructively and have a better chance of taking a useful place in society on their release, it is due to the efforts of a relatively small number of dedicated women who acted as our conscience. Prominent among them was Margaret MacLellan. (5)

For years she raged against Section 247 of the Criminal Code because of its “absurdities and inequities for women,” particularly as it related to abortion. It had been in existence for almost 80 years but had never been enforced. Margaret said in a 1971 public speech that “any law that cannot be enforced is a bad law . . . if Section 247 of the Criminal Code were ever enforced,” she went on, “the women’s prison at Kingston would be so crowded they would have to start putting the prisoners up in tents” (“Criminal Code”). At the time, every woman who deliberately ended her pregnancy was guilty of an indictable offence in the eyes of the law and was liable to imprisonment for two years.

During her presidency and while holding down a full-time job, Margaret kept up the pace. Particularly vocal on the subject of education for women and children, she managed to get considerable press coverage for CFUW. In her first year, for example, she was pictured presenting a Reading Stimulation Grant to the Nepean branch of the Ottawa Public Library to purchase books in the primary reading section. Nepean received $500 a year for three years for this purpose. A decade earlier, CFUW’s Library Committee had initiated the grants program to assist libraries in small towns or rural areas to acquire reading materials to encourage children to read and each book was labelled with a CFUW bookplate.

By the time of her third year as President, Margaret found herself quoted often in the Globe and Mail. In one article, she talked about the value of trained minds and how young women should strive for professional qualifications now available to them. And she threw out yet another challenge: “Most of us received help in getting an education from our parents or from scholarships,” she began. “Since we were prepared to receive help we should feel obligated to return some of the benefits to society by assuming responsibilities of leadership, by devoting time, energy and resources of character to the thoughtful study of today’s issues (“Married” 11).

At the CFUW Triennial in London in 1964, Margaret, as retiring President, pushed for continuing education appropriate to mature university women whose needs were being ignored. “It is time that CFUW took a more than theoretical interest,” she said. Like other CFUW Presidents, she pushed for an increase in membership numbers. She urged the Federation to examine its aims and purposes with an eye to doubling the existing membership of 11 000: “Surely from a potential of 85 000 university women graduates in Canada, we can attract and hold a membership of 20 000” (The Chronicle 37: 9).

Her Triennial theme was “The Canadian Mosaic: Changing Patterns in Canadian Culture.” At this meeting, delegates voted to commission the preparation of an anthology of biographies of exemplary Canadian women from various regions and historical eras to celebrate Canada’s Centennial (Berton and Coates: 60). The result was The Clear Spirit: 20 Canadian Women and Their Times edited by prominent economist, writer and editor Mary Quayle Innis and published for CFUW by University of Toronto Press in 1966.

Margaret’s participation in projects outside CFUW brought her further acclaim. In 1967 she joined the Women’s Committee for EXPO 67 in Montreal and that year was given a Centennial Medal awarded to Canadians recommended for their service to society. Three years later, her health in decline, she relocated to Toronto where family members lived and where she maintained her association with the National Action Committee on the Status of Women (NAC) and continued to accept speaking engagements.

Margaret liked to quote with approbation the description of women by 18th century English writer, Mary Wollstonecraft: “I shall first consider women in the grand light of human creatures who, in common with men, are placed on this earth to unfold their faculties.” Margaret more than lived up to this image.

—. ”History of Women’s Rights in Canada.” in Cultural Tradition and Political History of Women in Canada. Vol 8. Studies of the Royal Commission on the Status of Women. Ottawa: Information Canada, 1971. Print.