“In response to requests . . . that we be included in national or international or League of Nations communities . . . the demand was always for outstanding women, forgetting how much might come from enthusiastic, intelligent support of an average woman.” 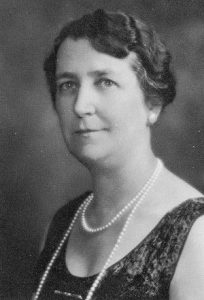 Mabel was born in 1879 in Fonthill, a part of Ontario’s Niagara Region, the daughter of the Rev. Edwin A. Chown and Mary Richardson. Both the Chowns and the Richardsons were families prominent in the commercial and social life of their communities. Mabel’s father was described as a “saddle bag preacher” and the family frequently moved to parishes in Ontario and in the West. Upon the Rev. Chown’s early retirement due to ill health, the family came to Toronto in 1896, thus enabling Mabel to attend the University of Toronto.

In the University’s 1900 year book, Torontonensis, Mabel was depicted as a very popular young lady and a favourite among the students: “pretty to walk with and witty to talk with and pleasant to think on.” It went on to say:

The daughter of a Methodist minister, Mabel Chown has won the distinction of having attended more high schools and collegiate institutes than any other student at Victoria. Whether this accounts for her success in her chosen field of Honours Moderns we know not, but she has certainly proved herself a brilliant star. During the past year Miss Chown has been first vice-president of her class, critic of the Women’s Literary Society and a member of the editorial board of Acta Victoriana. Her genial social qualities have made her a favourite not only with her classmates but with the students in general. (“Women” 87)

Throughout her life, Mabel demonstrated those same hallmarks – a gift for leadership, scholarship, geniality and critical thinking.

Two women seem to have had a significant impact on Mabel. The first was her mother, Mary, who is described in a family history as “quick minded, vivacious, interested in people”, with the ability to speak out at any meeting “if a bit angry.” Then there was her aunt, Alice A. Chown, an early feminist and leader in the women’s movement, who called for greater freedom and more economic independence for women, denounced marriage as the greatest drag on the individual that has ever been created, and later in 1930, attended the International Women’s Congress for Peace and Freedom in The Hague.

With these strong women in her family, it is not surprising that in 1903, Mabel undertook, with the help of 22 women from seven universities, to form a club of university alumnae living in Toronto. Mabel at just 24 years of age became the first president of what was then known as the University Women’s Association. She and her fellow members were also interested in creating a Canadian federation of university women.

It became evident that Mabel did not adhere to Aunt Alice’s concept of marriage when, in 1905, at age 26, she married Douglas John Thom. Douglas was a University of Toronto law graduate who had recently moved to Regina to set up his practice. The wedding was performed in Toronto by Mabel’s father who was assisted by the groom’s father, the Rev. James Thom, after which Mabel and Douglas went west to Regina – their home for the rest of their lives.

Mabel led a busy social life as both she and Douglas were very involved in the community. Their lives particularly revolved around education and the cultural life of Regina through its Orchestral Society and Little Theatre. They participated in two community charitable organizations, the Civic Relief Society, and the Community Chest, as well as their church.

According to her daughter-in-law, Mabel, the mother of four children, was very organized and ran a good household. She enjoyed giving teas and dinner parties and providing hospitality to friends and family. Her gracious home on College Street in Regina was the site of many social gatherings associated with both Douglas’s public service and Mabel’s own volunteer work.

She assumed a leadership role in the Canadian Red Cross, locally and nationally, the Women’s Missionary Society, the Local Council of Women, and the Women’s Canadian Club. Of all her activities, however, she most enjoyed UWC Regina, now known as CFUW Regina, and Mabel’s commitment to the goals and work of CFUW remained steadfast all her life.

In March 1919, new attempts were made to organize the existing Canadian UWCs into a national federation. By August that year they were successful when delegates from six clubs, including Mabel, went to Winnipeg for the inaugural meeting of the Federation of University Women in Canada. Mabel was called a “prime mover” in this endeavour and became second Vice-President of the new organization, beginning a 15-year executive commitment.

At the same time as CFUW was forming, an international federation was also being created. In 1920, in London, England, the first IFUW meeting was held with Canada as a charter member. The goals of the IFUW were to foster peace and encourage international understanding, goals which Mabel held dear. In 1924 during the presidency of Dr. Susan Vaughan a delegation of five Canadians that included Mabel, travelled to Norway for the third conference of IFUW. This conference established committees to work with the League of Nations and to investigate the status of married women.

At the fourth CFUW Triennial in Vancouver in 1928 Mabel became first Vice-President, serving on the Executive Council and travelling to Toronto for meetings and fellowship with other CFUW Executive members. In 1931 she was elected CFUW’s fifth President. Following this 1931 Triennial Conference, Mabel acted upon a motion passed by the membership and saw that the Chronicle was published annually and distributed free of charge to all members of affiliated clubs.

As the Great Depression began, Mabel brought to her presidency the goals of peace and understanding. In February 1932 she sent a strongly worded, well-argued letter to the President of the University of Toronto in which she denounced a recently passed resolution by its Board of Governors debarring married women from positions in the University (Chown). The letter, published in the Toronto Globe and supported by other women’s groups, brought the protest to a successful conclusion.

Under Mabel’s leadership, CFUW clubs signed a petition for disarmament and held meetings to discuss diverse international concerns from the rise of Mussolini in Italy to events in Manchuria. Significantly during her presidency, a Canadian delegation was sent to a conference in Geneva on the limitation and reduction of armaments. In 1934, the year Hitler assumed the title of der Führer Mabel chaired the sixth Triennial of CFUW in Edmonton, where two international issues were discussed. One was the horror that certain sections of the population, especially Jews, in Germany were facing, and the second was the plight of university women in Europe who were being denied facilities and removed from their positions.

All these concerns were of great importance to Mabel. Her compelling cause was always the right of women to a university education. She made sure that both her daughters, Mary (b. 1912) and Alice (b. 1915), went to university as did her sons, Stuart (b. 1907) and Edwin (b. 1910). Interviewed during her presidency by J. R. Bothwell for Saturday Night magazine and asked what the advantages of a university education were for a girl, she affirmed her beliefs:

The advantages of university training for a girl are the same as for a boy, only a girl needs it more. Some of the benefits are that it provided a trained mind, widened outlook, greater intelligence and more human sympathy; an ability to undertake worthwhile things and stability enough to carry them through; courage to withstand prejudice and to influence associates to a better attitude. I rate this development of mind and spirit as the desideratum. The ability to earn her own living and view life from the standpoint of economic independence should follow her course, but a university education should not be considered as designed to secure a position.

Mabel’s leadership qualities were greatly appreciated by CFUW. In 1932 she was warmly received by the Toronto club where recognition was given for her role in the founding of CFUW as well as for her ongoing leadership. Mabel’s last years were spent continuing her good works and enjoying her seven grandchildren. Ian Thom, her first grandchild, remembers her fondly, working on her needlepoint, and enjoying a cup of tea on the veranda with his mother, Moira, as he played on the lawn of her home.

In 1946 at age 68 Mabel died suddenly of a heart attack. According to her daughter, Mary, she was active to the end and died quietly in her sleep during an afternoon nap. In 1949, she was remembered in the CFUW Regina club history as a “faithful member” and “honored Past President.” The “Mabel Thom Memorial Gift to Europe” was given in her memory.

If Mabel was a brilliant star at university, she was most definitely a brilliant star in CFUW circles. Her light shone brightly throughout her life and work, and her “trained and cultured mind” made a significant contribution to CFUW and women everywhere.

“Was First President.” Clipping. Source and date not recorded. Print.