“I dream of a world where the daughters of our children and their children’s children will be valued for who they are and who they can be; where they will be free to laugh, to play, to explore, to study and to learn so they can reach their potential; where they can grow to womanhood in homes and communities where they are free from fear, discrimination, violence and war.” 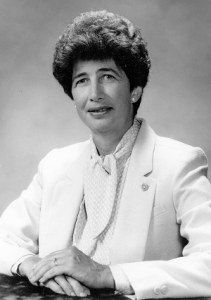 This lyrical statement eloquently expresses the philosophy behind Linda Palmer Souter’s drive to champion rights for women through CFUW and IFUW for more than three decades. The second Canadian to become IFUW President, Linda Souter is the only one to hold both the national and international presidencies. With clear vision, energy, and inspired leadership, CFUW’s 23rd President gave thousands of Canadian women an articulate voice and later gave that same voice to women of the 71 national affiliated associations that then comprised IFUW.

Linda was born in Montreal, and holds a BA from McGill University (1951), and a college course diploma from Boston’s Katharine Gibbs Secretarial School. She moved to Sudbury with her husband, Peter, a mining engineer, where they raised their three children. She was active in many community groups including the IODE, the Sudbury Memorial Hospital Auxiliary, and her church. Linda served on the Board of the local YMCA and the Youth Advocacy and Housing Task Force. She was an advisor to the “English as a Second Language Council”, and was a Red Cross swimming instructor at the Disabled Children’s Treatment Centre. In 1975, when a neighbour suggested she join CFUW to fill out her day, she signed up. Soon elected President of the Sudbury club (1976-1978), she went on to serve on the CFUW National Board as Provincial Director Ontario North (1978-1982). From 1982 to 1985 she was Vice-President Ontario and President of Ontario Council where her political voice was heard at the provincial legislature.

Prior to becoming CFUW President, Linda served on the steering committee for the Asia-Canada Women in Management Conference sponsored by the Canadian International Development Agency (CIDA). Meeting in June 1985, in Victoria, BC, 30 Asian women were matched with 30 Canadian women for this four-day conference on Entrepreneurship, Marketing, Finance, and Management. Outcomes included an extensive report, a marketing plan, and guides produced for use in developing countries.

In 1985, Linda was elected CFUW President and chose for her study theme “Women and the Economy – Influence through Knowledge”. Two accomplishments during her presidency stand out: setting up a permanent head office in Ottawa and establishing annual meetings between CFUW and Members of Parliament. The decision to establish the National Office in Ottawa was made at the CFUW Triennial Meeting in Calgary in 1985; Linda threw her white Stetson in the air in triumph after the vote was taken. The first CFUW head office was established on Parkdale Avenue at the same time as she and her husband were moving to Ottawa and she used the trailer from their move to transport furniture to the new CFUW headquarters.

It took perseverance and strategy to get the CFUW message to the appropriate government representatives. While the Honorable Barbara McDougall, then Minister for the Status of Women, was eating lunch at her desk, the CFUW representatives persuaded her to agree to a yearly meeting with Government to present an annual CFUW Brief. Annual Briefs provided an excellent starting point for discussions, and in those days, the meetings at which they were presented were set up through Ms. McDougall’s office. This connection led to invitations for CFUW to be represented on House Standing Committees on such issues as generic drugs and the Meech Lake Accord. This, in turn, led to close contact with the Canadian Advisory Committee on the Status of Women and its then Chair, Sylvia Gold. Through Linda’s efforts CFUW became one of the few women’s groups that had regular dialogue with the Federal Government in a period before power became more concentrated in the Prime Minister’s Office and federal ministers became less open to discussion and input from civil society and the general public.

Under Linda’s watch, CFUW members continued advocacy on such issues as violence against women and children, pornography, pay equity, pensions, day care, and access to generic drugs. The list is still with us. One of her first duties as President was to lead the Canadian delegation to the 22nd IFUW conference in New Zealand in 1986 where, in “an electric atmosphere”, a CFUW resolution opposing child pornography was ratified unanimously (Souter, “Issue” 11).

CFUW membership is a perennial issue. There were 12 500 members at that time, and with the number of women graduates increasing yearly, Linda longed for the membership to double. Her Board produced a membership pamphlet for use in all clubs and this was distributed widely. Members were reminded that everyone must contribute to the growth of CFUW. When someone suggested that younger women of the day were too busy with both jobs and children to join organizations, she countered that so was she!

Partnering with other organizations was high on her list of priorities. She initiated the first joint meeting, at the national level, of CFUW and AAUW. At the AAUW Biennial Meeting in Texas she opened her remarks in French so that attendees would understand that Canada was bilingual. At that meeting she persuaded Sarah Harder, then president of AAUW, to cooperate on a Cross Border Conference on Environment and Sustainable Development. One hundred and seventy women from the two countries attended the one-day conference held in Canada on August 19, 1988, at the beginning of the Ottawa AGM (Beatty 4).

By the end of her presidency, Linda had created an Executive Committee to handle routine business between yearly meetings. She oversaw the production of a new CFUW Policy Book in which procedures were streamlined and written descriptions of positions provided so that candidates for nomination to the National Board had a better sense of what each position entailed. While organizing was one of her great strengths, Linda was particularly adept at fostering decisions through consensus whether in workshops or committees, in Canada or abroad. Such democratic ways are time consuming but she felt it was time well spent to keep the road ahead free of obstacles.

Following her presidency, Linda continued to serve CFUW as CIR from 1988-1990. In this position, Linda helped initiate, plan, and implement the Africa-Canada Workshop for Women in Management, Marketing and Development held in Accra, Ghana, January 16-27, 1989. A favourite story of Linda’s from that time concerns a pig. In a local village, she learned that the women’s co-operative had sold their last piglet, ending their enterprise, so she made the executive decision to buy them another and contributed a similar amount to the fishing villages (Souter, “CFUW” 12). Linda was elected to the IFUW Board as second Vice-President from 1992-1995, and again from 1995-1998. She was elected President of IFUW for the 1998-2001 Triennium.

As President of CFUW and, later IFUW, Linda travelled extensively, gave numerous workshops, worked to encourage members, and often facilitated groups to help determine their future direction. Staying in people’s homes around the world gave her an intimate view of these countries (including some extraordinary plumbing). Getting to know how people lived wherever they lived was the way to reach the grassroots and effect change, she believed. She met thousands of university women during her journeys; one highlight was her introduction to the Empress of Japan facilitated by Reiko Aioki, who succeeded her as IFUW President.

The list of workshops and conferences in which Linda participated or which she organized for IFUW both before and during her IFUW presidency is substantial. They include her designing and facilitating Planning for Change: A Workshop on Organizational Development held in Sri Lanka for 40 participants from women’s NGOs in Bangladesh, India, Nepal, Pakistan and the host country, and the successful Planning for Change workshop under IFUW auspices that was held in Harare, Zimbabwe. Thirty women from 11 African countries, Canada, Europe and India participated in this ten-day training workshop. Linda co-authored, with CFUW Member Enid Blackwell Hinchley of Arnprior, Planning for Change (1994) a handbook on training leaders in organizational development and strategic planning which was translated and used by women world- wide.

Her final triumph as IFUW President brought her back to her CFUW roots when she hosted the 2001 IFUW Triennial Conference in her hometown of Ottawa. It was the largest IFUW Triennial ever with 956 delegates from 71 countries attending a packed week of seminars, workshops, and festivities. CFUW secured a grant from CIDA for $100 000 to bring women from developing countries to take part in capacity building workshops at the conference. The Virginia Gildersleeve International Fund also helped fund these workshops.

Linda didn’t retire at the end of her presidencies but continued to support both CFUW and IFUW assiduously through their triumphs and challenges as an essential part of the movement for women’s equality and the future of higher education for women.

Linda has received a number of awards in recognition of her lifetime commitment to leadership and to women`s equality. One was the Avon Women of Inspiration presented just prior to IFUW 2001. She was awarded a Life Membership in CFUW Sudbury and in 2002 became, at the national level, a CFUW Life Member. Linda was further recognized for her body of work at the CFUW AGM in Ottawa in 2010. In March 2014, CFUW announced the establishment of the CFUW Linda Souter Humanities Award, a welcome and well-earned tribute to her commitment to women’s education and developing leadership.