“The indispensable condition of all intellectual activity is freedom, the liberty to find truth where one may.” 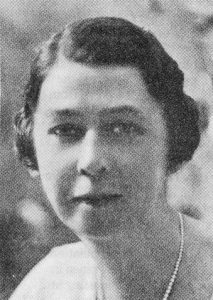 Laura Elizabeth Newman, CFUW’s sixth President, guided the organization from 1934 to 1937, a time defined by a global economic depression in what Laura described as “a catastrophically changing world.” It was marked by protests against re-armament and a sustained effort on the part of women’s organizations to try to avert another world war.

Laura was born in St. Catharines, Ontario, in 1883, the only daughter of Mary Josephine Patterson and Jabez Newman. Her father ran Newman Brothers, a very prominent building firm which is still in business today. As a woman of independent means, Laura spent her life working on behalf of society despite struggling with ill health in her later years.

She graduated from St. Catharines Collegiate with an honours standing and then went on to the University of Toronto where she received her undergraduate education at University College, graduating in 1905 with a BA in Modern Languages and History, a considerable accomplishment at the time. While at university Laura worked assiduously at her studies while being popular at dances and receptions. The university yearbook, Torontonensis, refers to Laura as one of the best all-round women students Varsity had ever had. Its two-line rhyming description of her reads “the reason firm, the temperate will,/ endurance, foresight, strength and skill.” She held office in the Modern Language Club and was on the Class Executive. Her profile concluded that her musical ability and unfailing readiness to oblige have made her “a decided acquisition to the Class of ‘05” (“Individual Biographies” 89). After graduation, Laura returned to the family home at 125 Ontario Street in St. Catharines.

Laura had a long association with CFUW, and in particular with the St. Catharines club which she helped found in 1921. At that time fewer than one percent of Canadian women held university degrees and Laura stressed that educated women had both advantages and responsibilities to society. She, herself, led by example by serving on the National Executive for 11 years. Prior to being elected President at the sixth CFUW Triennial in Edmonton in 1934, she had held the office of Treasurer for two consecutive terms, 1926 to 1931, and was second Vice-President from 1931 to 1934 as well as Convenor of the International Relations Committee. In her initial presidential address, she confirmed that CFUW heartily endorsed the stance of the Canadian delegate to the Assembly of the League of Nations, Dr. Robert J. Manion, who was opposed to the private manufacture of arms. As a reflection of the opinions that the delegates held regarding the public problems of the day, the following resolution was adopted:

Resolved that the Canadian Federation of University Women believe that any policy which leads to the suppression of minority opinion, or discriminating measures promulgated against the citizens of any country on the grounds of race, sex, religion or political opinion, is highly detrimental to the best interests of humanity. In this connection, they deplore especially the restriction of personal liberty in Fascistic and Communistic countries and reaffirm their adherence to the principles of democratic government.
We believe that, since only through the collective system can security be established and peace maintained, Canada should declare her readiness to carry out, with all the resources at her disposal, the measures which membership in the system involves. (Chronicle 10-16)

The Great Depression brought about a plethora of social issues. Laura recognized that the most notable of these may have been the discrimination against women, single or married, in occupations which offered gainful employment. As work for women became more difficult to obtain, CFUW re-emphasized its stand that women should be considered for work based on their qualifications, not their gender.

It is no surprise that the world malaise had a direct effect on the progress of CFUW. Its membership remained almost static although three new clubs had been organized. By the time Laura presided over the CFUW Triennial held in 1937 at Trinity College, University of Toronto, there were 31 clubs in the Federation. In her last “President’s Address”, Laura referred to two questionnaires sent out from IFUW on the Status of University Women and on the Status of the Gainfully Employed which apparently did not elicit a great deal of interest. This prompted her to ask if this was “a sign that there is not enough discrimination to arouse a righteous indignation or is it a matter of the general indifference which tends to nullify so much of the effort of the interested and enthusiastic few?” (Chronicle 15).

During her presidency, CFUW’s main undertaking was its Travelling Scholarship for which a certain sum was set aside for loans to scholarship holders who wished to continue their work for a second year. CFUW also offered a Hospitality Fellowship, tenable at Montreal or Toronto clubs for one year, preferably to a candidate from overseas. The Committee on Education “undertook to investigate in what numbers women have held administrative posts in education in Canada. They found that the Inspector of Schools was the highest administrative post in education ever held by women in Canada” (McGregor 31). CFUW also placed lists in universities of women qualified for higher staff positions with special reference to those who had been awarded scholarships. Another initiative was the revision of the financial structure of CFUW.

Laura was vitally interested and active in the work of IFUW. In August 1936, together with nine other CFUW delegates, she attended the IFUW Triennial in Cracow, Poland, after which she joined members from other national federations to visit Russia. While in Europe, she observed a propaganda campaign to keep women at home while intellectual freedom was fast disappearing in those countries. Laura felt that it was a strong wake-up call for Canadian women to preserve their liberties and not take them for granted. This belief defined Laura’s activities within CFUW. All who had been at Cracow returned feeling that “though the problems of internationalism seemed insoluble,” Laura wrote, “the most potent influence for understanding and goodwill was the university tradition of fellowship in the pursuit of knowledge” (CFUW 69). She urged CFUW to “play its part in building up a public opinion which will demand that some other solution than war be found to the problems of the nations of the world” (Newman 12). Laura was the Convenor, assisted by Laila C. Scott when the IFUW Triennial met in Toronto in 1947, a history making event because it was the first such meeting to be held outside Europe.

Along with her work with CFUW, Laura worked assiduously for the Canadian Red Cross Society. The St. Catharines Branch, formed in 1901, was the first unit in Ontario and was revitalized by her in 1914. During World War I (WWI) she gave unstintingly to the Society. She was made honorary secretary, a position she held until 1951, and was honorary member of the local executive until 1963. In 1946 she was honored with a Badge of Honour for outstanding work with her local branch and Ontario Division. She was also actively involved with the work of the United Nations Educational, Scientific and Cultural organization (UNESCO), and was a Charter member of the local YWCA established in 1928. She also worked at the St. Catharines General Hospital, following in her mother’s footsteps.

Laura died on January 11, 1968, at the age of 85 in St. Catharines and is buried in Victoria Lawn Cemetery.

University of Toronto Archives, clippings file on Laura and her family. Print.