“We Canadians are often too conventional and too conservative in our outlook. We are too satisfied with things as they are. If it were not so, there would be more women in public life.” 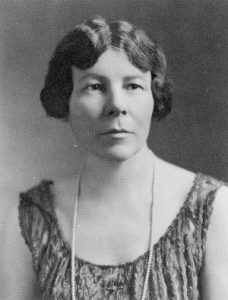 Laila Cordelia Scott was a dedicated champion of UWC Toronto, of CFUW, and of IFUW. A native of Oshawa, Ontario, born in 1885, she matriculated from high school in 1902 and continued her studies at Trinity College, University of Toronto. There she pursued an Honours program in Modern Languages, graduating with high standing in 1905, and completed her Master’s Degree in German two years later (“Individual Biographies”).

A born scholar with her meticulous attention to detail, Laila set her sights on further graduate work in Europe. To secure the necessary funds for study abroad, she taught for some years in private schools in Albany, New York, and Toronto (at St. Clement’s). She studied in Germany for two years and it is quite possible that the onset of WWI forced an earlier return to Canada than planned. By 1917 she was a faculty member of Trinity College, lecturing in German Language and Literature before becoming an associate professor in 1924, a post she held until 1949. She developed an extensive knowledge of the nineteenth-century German novel and its social background and, for a time, she also instructed in French. Throughout her career she was known for her thoroughness and careful attention to detail, qualities she also brought to her volunteer activities. In university circles she was valued as methodical, strong-willed, and independent. Beyond the campus, Laila shared her enthusiasm for German literature through the Toronto Branch of the English Goethe Society and was its secretary from 1951 to 1955 by which time she had retired from Trinity College.

From 1923 until her death in 1959, she served on the Council of St. Hilda’s College, a women’s college affiliated with Trinity College, University of Toronto. For much of this time she was Secretary-Treasurer and Vice-President. She had an intimate knowledge of the history and traditions of St. Hilda’s and displayed great skill and energy in promoting its welfare. Ill health prevented her from becoming its president in 1958.

For most of her adult life, Laila was an indispensable member of UWC Toronto formed in April 1903 and initially called the University Women’s Association. She began as Corresponding Secretary and eventually became its President. She was present at the founding meeting when some twenty-four women graduates from seven universities held a meeting at University College, University of Toronto, to discuss forming a federation of college alumnae. The association was to be open to any woman graduate residing in the city, and its focus was to be of use in the community. In 1910 UWC Toronto became affiliated with the Local Council of Women and the following year it set up a Civic Betterment Committee and joined forces with the Local Council of Women and the Toronto Suffrage Association to ensure the election of a good candidate for the Board of Education (Foster). But Laila also had a vision of university women coming together nationally.

In March 1919, following her first year of teaching, Laila and three other women graduates met in Toronto to discuss the subject of organizing a national body of university women. She was also present at the meeting in Winnipeg in August 1919, when six of the established University Women’s clubs: Edmonton, Ottawa, Regina, Toronto, Victoria, and Winnipeg, as well as the Alumnae Society of McGill (as it was then recorded), became Charter members of the new CFUW. The initial aims were to study social and economic issues as well as educational problems. Laila first served as Vice-President from 1926 to 1928, and then as CFUW’s fourth President from 1928 to 1931. During her term as President, she addressed 21 of the 26 CFUW clubs on the aims and work of CFUW and IFUW. This travel across Canada offered her insight into the often-parochial nature of Canadian society. She commented, “When one learns something of the problems that confront the different provinces of this Dominion, one marvels that Confederation is still a fact” (“President’s Address” 12).

Furthering educational opportunities on many levels in society was one of Laila’s causes and one of her legacies was the ongoing stimulation of interest in raising special funds for graduate fellowships. In her first written communication to the membership she encouraged local clubs to provide educational assistance in their own communities. She was concerned about students who had ability but were in need of financial assistance. Furthermore, she addressed the issue of unemployment among university women and the difficulty of their finding work for which they were best educated. She recommended, for example, that women be appointed deans of women in secondary schools “because of the declining influence of the home” and even though girls generally outnumbered boys, men teachers outnumbered women two to one (Scott, “Foreword” 12).

In her address at the fifth CFUW Triennial, held in 1931 in Ottawa at the end of her term, Laila urged university women to take more interest in public affairs. “Of course we should not express any opinion rashly or unadvisedly,” she said, “but what I fear is that we are often too indolent or too indifferent even to have an opinion to express or suppress” (Scott, “President’s Address” 13). Laila was a zealous supporter of IFUW. Dr. Martha Law, CFUW President from 1952 to 1955, wrote:

Few, if any, Canadian graduates have made a greater contribution to the International Federation of University Women than her. From its inception until her death Miss Scott attended conferences, sat on committees and in 1947 when the first postwar conference was held at the University of Toronto Miss Scott was Assistant Conference Secretary performing her duties with dignity, dispatch, and rare ability. She will be remembered by all who knew her as an exemplar of courage, intelligence, distinction, integrity of mind, as a loyal friend and a gentlewoman. (Law 13)

She embraced IFUW in her first speech as CFUW President when she said: “I sometimes wonder if university women realize how, by making it possible to organize into an International Federation, they are furthering the interests of women in other countries and thus making a real contribution to the welfare of our ‘large neighbourhood’, as Bernard Shaw calls the civilized world of today” (“Foreword” 10).

Laila’s opinions were sought frequently at the Toronto club where she was known as a wise counsellor and a woman of integrity and intelligence who offered clear and thoughtful judgments. After her death in Toronto on October 13, 1959, the Toronto club established the Laila C. Scott Memorial Scholarship valued at $200. It was awarded for general proficiency to a woman in her second year of studies in Modern Languages (preferably including German) and tenable at the University of Toronto. In 1964 the amount was raised to $400 where it remains. The award is managed by the University’s Department of Germanic Languages and Literature.