“Greater access to new information technologies for every woman on this planet is an essential step in our continuing quest for equality.” 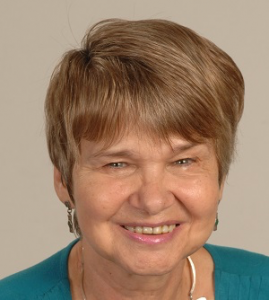 Jacqueline Jacques, the 30th President of CFUW, was born in Montreal and completed all her formal education there. She received a BA in 1969 from the University of Montreal, choosing the Humanities as she wished to learn about politics, economics, philosophy and the English language.

Jacqueline’s main desire, however, was to complete a Bachelor’s degree in Computer Sciences. Her father, Maurice Jacques, was very influential in her career choices and in her life and when she was only five, he set her on her future career path when he showed her that computers are able to do more and more work, changing society, replacing many jobs, and radically altering communication. In New York, in 1953, it had taken a computer to find the solution for the Hoo-Doo game he invented and marketed successfully: a solution for which he had searched more than a year.

Following her BA she met with the Head of the Science Department at the University of Montreal to discuss the urgency of offering a Computer Science degree. When he called her a few months later to announce this new program she transitioned to Mathematics and Science, and graduated with a Bachelor of Science in Computer Science in 1973, one of seven women of a class of eighty-eight. Jacqueline is proud of her educational achievements which enabled her to find employment, to send her son to quality schools and colleges, and to teach computer science courses at the college level. She says her university studies have given her the autonomy and financial security essential for women today. Additionally she believes being in the company of graduates from varied academic areas facilitates the exchange of knowledge and opinions, while their contributions to business result in the development of quality projects. Her studies, in addition to her family, have formed the basis of her life.

Jacqueline has had a varied and extremely successful professional life. On her Linked-In page, she writes that she has 30 years of experience in Information Technology (IT) as a Business Analyst, and a Quality Assurance and Test Coordinator. She has worked for such diverse organizations as the Standard Life Assurance Company of Canada, the National Bank of Canada, Teleglobe International, and Bombardier Transport. Some of her work related to helping women entrepreneurs with their projects.

Jacqueline includes economic empowerment, the environment, health and human rights (especially of children), and politics, among the issues she cares about. She supports such diverse organizations as the Canadian Diabetes Association, the Alzheimer’s Association, Children First, the Mental Health Institute and the Environmental Agency. This talented and intelligent woman is also an accomplished producer, comedian, and actor whose hobbies include dream analysis, keeping fit, golf, movies, theatre, music, and travelling.

Her honours and awards Include: Prix d’Application et Personnalité, from Banque Laurentienne, 1955; Woman of Distinction, IT section, and being listed in Cambridge Who’s Who, VIP Section, in 2011.

Jacqueline came to CFUW in a rather dramatic way. In her own words:

I will speak now to CFUW and the beginning of my involvement. The drama of the Montreal massacre at the École Polytechnique on December 6th, 1989 marked me as it did my entire generation of women: fourteen young girl students of engineering, killed in twenty minutes by one resentful man who then committed suicide. I always thought that such an event could not and should not exist at the close of the twentieth century in a so-called civilized city. In addition, I lived not far from the scene. As I was watching TV one evening, I saw Mme Suzanne Laplante-Edwards, mother of Anne-Marie Edwards, one of the young women killed that day. She described the event in great detail, crying all the while, and I felt I was suffering as much as she was. The moderator then asked if viewers who wanted to do something to avoid such killings in the future could contact someone and Mme Edwards replied that there existed AFDU Montreal (Association des Femmes Diplomées d’Université), a francophone association of university women, of which she was a part. It was working to propose a solution and we could contact them. I called the AFDU Montreal the next day and told them I was prepared to help them draft a resolution and move forward. It occurred to me that a registry of firearms would help to better keep track of owners of firearms and their background. At the first meeting I saw that the members were of high quality and women with whom I could exchange ideas and socialize. Our resolution was presented to the AGM and passed. Then the lobbying began and the bill on firearms registration, that I helped put in place, was accepted.

During this time Jacqueline learned that lobbying by large organizations was mandatory if CFUW wished to improve society.

In AFDU Montreal, Jacqueline together with other members drafted a resolution for gun control to present to the CFUW Legislation Committee. Two resolutions on this issue were adopted by CFUW. In 1990 CFUW resolved to lobby the Government of Canada to ban semi-automatic weapons and to make more stringent the requirements for obtaining a Firearms Acquisition Certificate. In 1994, CFUW resolved to establish a national registry of firearms.

Jacqueline became President of AFDU Montreal and served two two-year terms (1994-1996; 1996-1998). She organized many events for women to meet and discuss significant issues. She attended all the CFUW AGMs and came to realize that it was important to maintain a Francophone membership in this large national organization. That is why she accepted the position of Regional Director Quebec French (1998-2000), followed by that of VP Quebec (2000-2002). In 2002, Jacqueline was pleased to be elected the first French-Canadian President of CFUW. As National President, her interest lay in furthering the cause of women and education and improving communications using information technology.

Under Jacqueline’s leadership CFUW tackled a number of important issues. Resolutions on the environment were foremost on the agenda. CFUW approved the ratification of the Kyoto protocol in 2002 and Jacqueline wrote to Prime Minister Jean Chretien urging him to sign on, stressing that to maintain a healthy environment was of prime importance for Canada and the world. Although he signed it then, later when Jacqueline approached the government she was disappointed to see that there was no plan in place to execute these good intentions. CFUW passed and promoted adoption of other environmental resolutions concerning the restriction of pesticides and the protection of water. These were presented to the Canadian Government and were proposed as resolutions to IFUW.

In 2003, Jacqueline and members of the Committee for International Relations participated in the UNCSW in New York where the issues of violence against women and access to information and communication technologies were addressed. This was a few days before the Iraq war broke out. All the women present, representing many countries, held an antiwar demonstration and on behalf of CFUW, Jacqueline sent a letter to the Prime Minister urging that Canada not participate in the conflict. The war had started by the time she returned to Montreal.

During meetings with the Federal Government to present CFUW policy, she was pleased to realize that CFUW was well-known to the government, not only as an important organization wanting to improve the education of women but also for its desire to improve the quality of life for all Canadians and, through its support of IFUW, citizens of other countries.

As President, Jacqueline was impressed by the women she worked with. She noted that she “had an excellent team in all her Committees”. She felt that the Regional Directors should have their power increased, be directly involved in the AGMs, and consulted on various issues as they were the direct link with the individual clubs. She therefore instructed the Constitution and By Laws Committee to review and update the job descriptions of Board and National Office personnel.

She was determined during her presidency to make CFUW and its wide-ranging policies, resulting from resolutions, better known to the members and the public so they could be better implemented. It was natural for someone with her background in IT to focus initially on communications and the CFUW website saying “ . . . our Website must become our prime communication tool.” At her direction the Resolutions Committee harmonized the existing policy manuals to create one official policy book which was then put on the website with a search function so the policies were easily accessible to the members. The policy book section clearly shows even the casual visitor to the website that CFUW is a serious and worthwhile organization. Jacqueline also felt that it was “critical that services be provided to members in both official languages in a timely and accurate manner”. She was instrumental in helping to make the website bilingual as she felt it was important for a bilingual organization to have a bilingual public face.

She appreciated the organization of the AGMs, publication of newsletters, distribution of scholarships, and all the work of Executive Director Susan Russell and her dedicated office team.

By the end of her presidency, CFUW had again increased its membership to 10 000. She felt that it was a lot of work but worthwhile as many members are necessary to maintain an organization and essential for the continuation of the organization’s good work.

What did Jacqueline like best as CFUW National President? It was the visits to all the clubs throughout Canada. She visited almost all of them from the Atlantic to the Pacific. Everywhere, she met smiling, bright, dynamic women, ready to share their experiences to improve society, and ready to discuss any subject. While visiting the Edmonton club Jacqueline received word of her father’s death. The sympathy expressed and kindness shown impressed upon her the value of being a member of such an organization. In Jacqueline’s own words: “For those two years, CFUW was my family and I shared beautiful moments!”