“Scholarships – stimulating talks – study groups – action groups – interest groups. These are the vehicles by which clubs express their concerns, give leadership in their communities, provide intellectual stimulation for their members.” 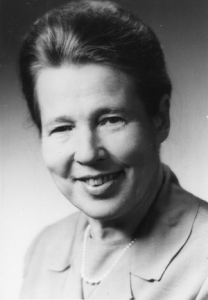 Born in Scotland, Eileen Crawford Clark came to Toronto in 1945 as the war bride of her husband, E. Richie Clark. It was soon apparent that she was a woman of singular abilities. She received a membership to UWC Toronto from her Clark sisters-in-law, and she maintained club affiliations in each city where she lived. Her husband’s career as a banker with the Industrial Development Bank of Canada resulted in their moving to Vancouver, Winnipeg, and Montreal between 1955 and 1958 where Eileen joined their respective CFUW clubs (Berton and Coates 77).

On moving to Montreal, she joined CFUW and became CFUW Provincial Director Quebec English (1970-1973), and then Vice-President Quebec (1973-1976). She chaired CFUW’s International Relations Committee from 1968 to 1979, an area of particular interest to her. She headed committees on various aspects of CFUW policy, including constitution and by-law revision. Thus, Eileen brought a wealth of Federation experience with her when she assumed her presidency at the 1979 Quebec City Triennial, during the United Nations International Children’s Year. The theme “Growing up Canadian” was explored under the headings ‘Canada in 1979,’ ‘Women in Canada,’’ and ‘Children in Canada.’ Eileen was quick to point out that 1979 also marked the 50th anniversary of the Persons Case – the decision that women were persons within the meaning of the British North America Act and could therefore be members of the Senate. A bilingual person herself, she was prepared to promote bilingualism whenever the opportunity arose. On this occasion, the Secretary of State provided a $4560 grant to cover costs of simultaneous translation of conference proceedings as well as translation of the Journal, The Chronicle and administrative documents. Efforts to improve effective communication between National Office and the membership were reflected in the redesign of the Journal approved by Eileen in 1979, which provided both more news and greater opportunity for opinions and ideas. This version lasted for a decade. Eileen noted at the end of her term that the National Office was now functioning bilingually.

Perhaps the most pressing issue for CFUW during her presidency was the relationship of CFUW with the Geneva-based IFUW, lasting over 60 years by 1980. At the time, both CFUW and AAUW were short of funds and objected to the stiff IFUW dues. They felt that no single affiliate should pay more than 25 percent of their whole budget on IFUW dues; at the time AAUW was being assessed at 67 percent. Along with other affiliates, AAUW advised that IFUW headquarters be moved from Switzerland to a country with a more advantageous currency. They also recommended a more democratic structure and a more action-oriented program; if these proposals were not implemented, they would consider withdrawing from IFUW.

This issue came to a head when British Columbia hosted the 1980 IFUW Triennial in Vancouver. From all reports, this conference, attended by 825 members from 44 countries, was enormously successful. There, Eileen led the Canadian delegates and obtained what was considered a reasonable and just compromise. Geneva remained as IFUW headquarters, but a new dues structure was adopted, increasing annual dues to $10 per capita effective 1982-1983. Administrative costs were reduced by combining two committees and reducing the number of members involved. This move was overwhelmingly supported by the membership. For CFUW, this compromise along with the addition of new clubs provided the financial boost it sorely needed. Eileen said that the friendly and hospitable atmosphere established by Canadian members made it “possible to resolve a number of contentious issues in a spirit of goodwill” (Journal 22.4 (1980): 1).

At the end of 1981, Eileen participated in a meeting in Ottawa organized by Status of Women Canada to learn about a summer conference held in Copenhagen at which the Canadian Government had signed the United Nations Convention on the Elimination of All forms of Discrimination Against Women. All National Voluntary Organizations (NVO’s) were asked to lobby governments to urge them to initiate the necessary legal studies as soon as possible. A copy of the Convention was sent to all CFUW clubs by the chair of the Status of Women Committee. The matter did not end there, however, and CFUW along with other women’s organizations, vigorously lobbied the Federal Government and all provincial governments to ensure that equality rights for women were entrenched in the new Charter of Rights and Freedoms. “It seems almost incredible,” Eileen wrote, “that our governments would have been quite happy to ensure rights for male persons, but not for the remaining 52 percent of Canada’s population, had we not protested” (The Journal 22.8 (1982):1). She advised remaining vigilant and protesting against discrimination whenever it occurs.

Rounding out her presidency was the CFUW Winnipeg Triennial in 1982 with the theme “Our Technological Society.” Before this meeting, CFUW co-sponsored a highly successful Ottawa conference on the general theme “Women and the Impact of Microtechnology.” Eileen herself was sympathetic to this particular subject. A teenage mathematics prodigy, she had received a government scholarship to undertake an accelerated degree in mathematics and physics at St. Andrew’s University in Scotland, and when she turned 19 had joined the Women’s Auxiliary Air Force, becoming a radar technical officer when radar was a new field. She was posted to various Royal Air Force stations eventually becoming an Officer in Charge. At one such station, Gibbet Hill in Surrey, she met her future husband. Once her tour of duty was over, the British Government forgave her remaining university courses in return for her wartime services, and she formally received her Bachelor of Science degree from St. Andrews University in 1945.

Given this scientific and demanding background, she was not intimidated by the technological revolution that was sweeping the country in the 1980s, although she recognized that “few know whether the consequences of this new technology will prove to be a blight or a blessing” (The Journal 22.8(1982): 1). The topics discussed at the Winnipeg Triennial, “Communication through Microelectronics” and “Living and Working in the Electronic Age,” provided an opportunity “to try to understand the rapid technological developments which are taking place, and the necessity to examine the social and ethical implications of these advances especially as they affect women” (Berton and Coates 77).

The Mayor of Winnipeg was a Triennial guest and he conferred on Eileen the Honorary Citizenship presented to distinguished persons who did not live in the city. Eileen also received tributes from within CFUW. Widely admired for her competence, integrity, and graciousness, one delegate spoke particularly of her effectiveness as a leader: “Our wee Scot, [she was barely five feet tall] standing among us, might be overlooked – but when sitting in the chair – she is taller than any of us” (Kennedy 27).

Throughout her presidency, Eileen actively networked with women’s organizations who shared agendas such as education, status of women, and international affairs. She attended the centennial celebrations of AAUW in Boston in June 1981, and found herself among 3920 delegates who voted to retain membership in IFUW – for the time being.

In October 1981 she was invited by the Department of External Affairs to take part in a study tour of Europe along with representatives of 11 other women’s organizations. The object was to learn about and appreciate Canada’s involvement in various international organizations in Europe. While the women learned a great deal about the importance of Canada’s overseas commitments, what Eileen valued most from the tour was that 12 presidents and executive members of Canada’s women’s organizations had the opportunity to get to know one another and discuss respective aims and interests.

At the end of her term, Eileen reflected that to her, “CFUW membership means friendship, personal enrichment, and the opportunity for community involvement . . . I shall always be grateful for the privilege of having been given the opportunity to serve as President of this wonderful federation” (The Journal 22.8: 6). In 2001, she was given Honorary Membership in CFUW for her years of service.

After her Triennial ended, Eileen became first Vice-President of IFUW, a post she held for six years attending at least another three Triennials where she made many friendly contacts from around the world.

Resting on laurels was not Eileen’s style and the year following her Triennial she shouldered the presidency of the St. Andrew’s Society of Montreal, of which she and her husband had been long-time members. From 1973 to 1981, she ran and revitalized its welfare committee, and in 1983, became the first woman President in its storied history.

Her volunteer work continued unabated and in 1999, she appeared in Chatelaine magazine’s Who’s Who of Canadian Women. It detailed many of Eileen’s activities within the category of not-for-profit organizations, which culminated in her receiving a Queens Golden Jubilee Medal in 2002. Her commitments ranged from Senator and Vice-Chair of Presbyterian College, McGill University; Trustee of Mount Royal Cemetery Co.; Companion of the Hospitaller Order of St. John of Jerusalem; docent at McCord Museum of Canadian History in Montreal; Chair of the Committee on Arts and Letters, Montreal Council of Women; member, and later second, then first, Vice-President of the Board of Directors of the Virginia Gildersleeve International Fund. In Eileen’s Chatelaine listing, her side interests other than global travels included reading, history, 18th century porcelain, curling, and gardening, not to mention smocking, knitting, baking, cryptic crosswords, and her 13 grandchildren. Given her unflagging commitment to international affairs, her society, and her family, it is clear that she had long mastered the art of time management.

Married for 61 years, Eileen died in 2007 just 48 hours after her husband’s death. At his mother’s funeral, her son, Ritchie, said of his mother: “They were devoted to each other in life and now they are together for all time. . . .This is the last chapter of their beautiful love story. She had an expression: ‘Good things come in small packages,’ and she was a small package. But when she stuck her chin out, there wasn’t a thing she couldn’t do.” (Hustak)

Hustak, A. “All love stories end, but few end as gracefully and as well ordered as this one.” Montreal Gazette 28 Jan. 2007. Print.