“We are living in a world which sorely needs new ideas born of thought.” 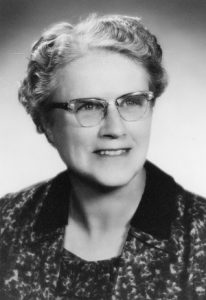 Throughout the tumultuous era of the late 1950s and into the early 1960s, the leadership of CFUW was well in hand with Vivian Morton at its helm. International events such as the formation of NASA, Fidel Castro’s coming to power in Cuba, the Dalai Lama’s being forced to flee Tibet, the construction of the Berlin Wall, and the opening of the St. Lawrence Seaway frame the initiatives and challenges of the world during that period. Nationally, John Diefenbaker was Prime Minister and had appointed Canada’s first female federal cabinet minister, the Rt. Hon. Ellen Fairclough in 1957. The next year he appointed Canada’s first federal female Ambassador (to Israel), Margaret Meaghen. In contrast, aboriginal women were not given the right to vote freely until 1960 when the Canadian Bill of Rights became law, but even then they could vote only in Federal elections. At a time when monumental changes were occurring on political, social, economic and cultural fronts, women’s issues were moving more to centre stage than ever before and Vivian Morton made solid contributions as CFUW’s National President.

Before becoming National President, however, Vivian served at the club and regional levels. When introducing her to the CFUW membership in the 1958-1959 Chronicle, Margaret Cameron noted that Vivian had joined CFUW Saskatoon (founded
1919) when it was two or three years old, and that as Club President she had “fostered and stimulated the growth of the special interest groups. . . .” (Cameron). On the national scene, she had been CFUW Membership Secretary from 1946-1953 and Provincial Director for Saskatchewan 1957-1958. Vivian attended two IFUW Triennials: London in 1953 and Paris 1956.

In her report to the 429 delegates attending the 1961 CFUW Triennial in London, ON, Vivian summarized the accomplishments of her tenure as CFUW’s 14th National President (Chronicle 1961-1962: 16-17). In addition to mentioning the many briefs that had been prepared and the response of the organization “to the call of World Refugee Year,” Vivian was most pleased to note:

Some [of our] resolutions have been implemented. …a woman was named to the Parole Board, and one woman was sent to the Commonwealth Conference on Education at Oxford in 1959. This latter appointment was made because of the direct . . . efforts of an executive member on behalf of C.F.U.W. We have reason to believe that our persistent reminders to the government that women can be very useful members on many boards . . . are showing results. (italics added)
During her presidency, CFUW participated in the Canadian Conference on Education, and “became a member of this body and was represented at all national committee meetings by one voting delegate and one observer” (McQueen). There was strong support at this conference to include French in the elementary school curriculum.

CFUW’s commitment to fellowships, scholarships, and bursaries continued with the value of the Allie Vibert Douglas fellowship in honour of the first CFUW member to become President of IFUW, being increased by one-third, to $2000. This mirrored the increase in the total value of scholarships being presented by CFUW clubs across Canada, which also saw a dramatic increase from $21 000 to $30 000.

Progress was made when, in January 1960, for the first time in CFUW history, submissions from CFUW committees were presented directly to the Prime Minister. These included “asking for income tax deductions for working women, particularly married women, and university students” (Morton 3), a plea for the building of a National Library, support for the National Art Gallery, the CBC, and for the admittance of a larger number of tubercular Hungarians to Canada during World Refugee Year (3). The International Relations Committee supported bringing more refugees to Canada and, according to Vivian Morton’s report, “Clubs from coast to coast became deeply involved, and often the leaders in the U.N. call for action to clear camps in the world’s staggering problem of refugees” (Morton 5). She said of another achievement: “It was during this Triennium that the Canadian Commission to UNESCO was established. [CFUW] expressed its happy approval to the minister in charge and set up observer relationship” (5). Using her expertise in committee work, Vivian left her mark by working to improve all areas of concern to the Federation.

During her term of office, ten new clubs were formed and the membership of the federation increased (Morton 7). However, Vivian strongly felt that partly because of the rise of professional associations, CFUW no longer held the same unique position for university women as it had done in the past.
Vivian Williams Brown was born September 10, 1896, in Amherstburg, Essex County, Ontario, to Ida and Charles Brown, a Methodist minister. By 1906, the family had moved west to Regina. Although little is known of her childhood, the “Tribute” to her in the Journal of 1990 records that she was educated in schools in Ontario, Saskatchewan, and British Columbia (Chronicle 1990: 14). She graduated from the University of Saskatchewan in the spring of 1917 having earned her BA degree. Earlier that same year, she had become a founding member of the Historical Association of the University of Saskatchewan along with six other students of Professor Arthur Silver Morton. Professor Morton its organizer and honorary President wished to involve his students in the collecting and preserving of materials related to the history of the province. (Champ 29).

Following graduation she studied music at the Royal Conservatory of Music in Toronto. Arthur Morton, her former professor, came to visit (and court) her while she was a student there and on May 5, 1919, at the age of 22, she married him in Thunder Bay, Ontario. They lived in Saskatoon until that fall when “she returned to Toronto to complete her studies with her husband’s support and encouragement” (Champ 30). Vivian and Arthur had two daughters, Mary Vivian in 1923 and Sarah Silver in 1925 (Champ 30).

During her married life, Vivian continued her leadership and community involvement by spearheading the creation of the Saskatoon Arts and Crafts society in 1923 (Meszaros). She was a founder and President of this group which embraced the cultural diversity of immigrants who had settled in western Canada. Ukrainian, Finnish, Swedish, Norwegian, and Danish women would meet to share and make creative arts from their varied cultural backgrounds. The focus was not on craft making in and of itself, but on concerns raised by the University’s Historical Association that traditional craft items would disappear as modernization took place. Consequently the society was attempting to collect items which might not be produced in the future.

Vivian and Arthur clearly shared a passion for history and culture as he continued his tenure at the university while researching and writing about early western Canada until his retirement in 1940. Vivian pursued volunteer initiatives in the areas of history and culture of her adopted community and took care of the family home and raised their children. After 25 years of marriage, Arthur Morton passed away in January 1945 at the age of 74 and is buried in Saskatoon.

After World War II and the establishment of the Saskatchewan Arts Council, Vivian Morton became the chairperson of the Council’s Handicrafts Committee and continued her support of creative arts and crafts in this capacity for 14 years (Meszaros). Not only did Vivian spend time volunteering in the arts community, she also delved into a variety of areas where she could offer her organizational expertise. She served as President of the University of Saskatchewan’s Alumni Association, President of the University Women’s Club of Saskatoon, and was a Charter Member of the Saskatoon Branch of the Canadian Institute of International Affairs. (Champ 30). During the 1940s and 50s she also served in various positions with the National CFUW Board.

A year after her term as CFUW President, in 1962, the University of Saskatchewan presented Vivian with an honorary Doctor of Laws for her contribution to arts and culture. Accolades of the day noted:

We are honouring Mrs. Morton, not only as a nationally known and respected figure, but a person who, very soon after her graduation, began to be an active force in the cultural development of her city . . . in an astonishing variety of fields, over a period of more than forty years. (Presentation)

In addition to the joint university scholarship that had been established earlier, CFUW Saskatoon created the Vivian Morton Scholarship to support an upper year student who is continuing her studies after an interruption in her education (Vivian Morton Scholarship). Vivian later moved east, to Bayfield, Ontario to be closer to her family and her three grandchildren. She became active in her adopted community through her involvement in CFUW London and in the Bayfield Historical Society (Celebrating). She enjoyed travelling to CFUW and IFUW conferences whenever possible. Vivian died in 1990 at the age of 94.