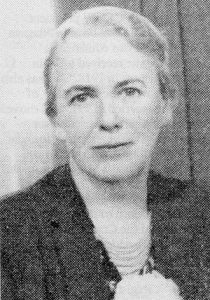 Ursilla Macdonnell led a full life, engaging and influencing a generation of young Canadian women in her role as Dean of Women at the University of Manitoba. She continued in her retirement to further advance the role of women and women’s work in the post-war world as CFUW’s ninth National President.

Ursilla Naismith MacAlister was born in Ashton in the Ottawa Valley, May 6, 1879, the daughter of Margaret White (Greenshields) and John Masson MacAlister, a Presbyterian minister, and was raised there with her brothers James, Alexander, and John, and her sister Jean. She attended school at Iroquois on the St. Lawrence and earned her undergraduate degree at Queen’s University in 1900. She taught at Glencoe School near London, and married the Rev. Logie Macdonnell of Toronto in the spring of 1905. The young couple travelled west and their only son, Ronald, was born in Vernon, British Columbia in 1908. She may have completed some academic writing at this time as she is listed (under the name Mrs. Logie Macdonnell) as the author of “Wolfe at Louisburg” in the book, Hearts of Gold: being chronicles of heroism in Canadian history, published by the Ontario Women’s Liberal Association, c1915. Ursilla’s life changed dramatically when her husband was diagnosed with tuberculosis, necessitating their moving back to Ontario. With her young son she cared for her ailing husband until his death Sept. 9, 1915.

Ursilla returned to Queen’s to complete her MA and her PhD saying “I wanted to be useful and I enjoyed studying more than anything else I could do” (Gibbons, “Nominal” 11). She is credited by Professor Macnaughton of McGill University for her research in his work Canadian Transport Sourcebook, written mainly in 1917. The book was considered a too controversial and unconventional biography of Lord Strathcona and consequently was not published until heavily edited by W. L. Grant in 1925. The opportunity for employment as the Dean of Women at the University of Manitoba arose and she accepted the position in 1920 as Dr. U.N. Macdonnell, a title that appears not to have been used until the end of her university career: “She has never been addressed as Dr. Macdonnell here although the meticulous University Women’s Club of which she is National President, uses the title” (Gibbons 11). The many articles in the social pages of the local newspapers confirm that she was introduced, addressed, and referred to, as Mrs. Macdonnell until she was elected National President of CFUW.

During her first ten years at the University, Ursilla was a Professor of History in addition to holding the office of Dean of Women. She wrote the book, Gibbon Wakefield and Canada Subsequent to the Durham Mission 1839-1842, published in 1925 by The Jackson Press, Kingston. In 1928 she was appointed Acting Head of the History Department until it was permanently filled in 1930. She was acknowledged for her sound academic credentials by being paid a salary that was superior to that of other women faculty at the University. She started with an annual salary of $2800 in 1920, which at the time was equivalent to the salary of a newly appointed male assistant professor. By 1926 she made $4000 while other women faculty made less than $3000 (Kinnear 270).

Ursilla was known affectionately by her students as Mrs. Mac. As Dean of Women, Mrs. Mac was counsellor to the 250 women at the University in 1920, a number which tripled over her 24 years of service to the University. She frequently attended banquets and teas, presided over dances and balls, and played chaperone at a multitude of events including train trips with athletic teams. A key role in her tenure as Dean of Women was to provide advice. An article focussing on her retirement noted that she did not offer advice unless asked but that she encouraged students to talk over their problems “since stating the pros and cons clears the mind” (Gibbons 11).

In addition to her academic responsibilities, during the Depression Ursilla further displayed her leadership abilities by becoming the first woman president of the Manitoba Education Association in 1933. By the time war broke out, she was heavily involved with CFUW, serving at the national level on various Committees and Sub-Committees. She was, for example, Convenor of the Standing Committee on Academic Appointments and of the Special Committee on Postwar Civilian Rehabilitation in 1942. She was connected to the Red Cross and reported, on behalf of the University of Manitoba, that the “coeds” had knitted 220 pairs of socks during the fall of 1939. She also reported on work done by the Soldiers’ Comfort Division of the Red Cross Committee on the War Auxiliary Council. In 1942, Ursilla, along with her son Ronald (by then First Secretary in the Department of External Affairs for the Canadian Government and living in Washington D.C.) and his wife, attended a Christmas Eve engagement at the home of Manitoba’s Lieutenant-Governor Roland F. McWilliams. Ursilla Macdonnell and Margaret McWilliams (CFUW’s first President) spent time together at various social functions during the later years of World War II and it appears that these two CFUW Members may have helped spur each other on in their initiatives in support of the war effort.

Taking on the role of CFUW’s ninth National President in 1943 just prior to her retirement from the University of Manitoba was a natural progression for this self-reliant, educated woman. Before her retirement she had purchased the same house in Kingston, Ontario where she had lived before moving west. Her UWC Winnipeg membership card confirms that she relocated there in June 1944. Her life experience, both personally and professionally, gave her great insight into the lives of the young women of her day and her stalwart attitude is evidenced in her choices about where to focus her energy. During one of many University retirement speeches, Ursilla offered three very matter-of-fact pieces of advice to young women living in a country at war, words which clearly reflected her own personal life experience. She encouraged the women in the room to understand that a great sorrow or loss could be turned into a reservoir of power, to get rid of their own vanities, and to get into the habit of hunting for the truth and profiting by the stimulus derived from this (“Trained Women” 10). Ursilla Macdonnell was a practical woman who believed in the strength of women and the contributions they could make to a changing society.

As CFUW President, Ursilla spearheaded the collection of clothing to be sent overseas to war-torn Europe as a national CFUW project. Letters were sent to local clubs across the country requesting assistance and support. Additionally, through her initiatives, local clubs also contributed financially to “a fund to be used for replacing libraries and scientific equipment in the bomb-shattered universities of Europe” (CFUW 9 Oct. 1945). In her Triennial report, Ursilla proudly reflected that she had, over her three years as National President of CFUW, had the opportunity to visit each and every one of the 38 clubs that existed across Canada at the beginning of her term. During her presidency CFUW had tremendous growth both in number of new clubs formed and in increased membership in established ones with 16 new clubs being formed and membership rising from 3008 to 4060. This significant increase occurred at a time that Ursilla herself described, as “critical beyond most” (Chronicle: 1946:15).

Much of this growth is attributed by others to Ursilla’s enthusiasm and personality. In the “Foreword” to the 1946 Chronicle Ruth Crummy, incoming President wrote: “The Triennial Conference . . . August 21-23, 1946, climaxed a period of record growth – in membership, in practical projects and in national prestige . . . Imaginative insight and enthusiasm on the part of the past president, Dr. Macdonnell, and her Executive Committee are largely responsible for the expansion. . . .” (4). In the same Chronicle, Membership Convenor, Mrs. C. W. Sheridan says: “Much of the credit for this spectacular increase goes to our worthy president, Dr. Macdonnell, whose leadership, enthusiasm and firm belief in the Federation, have inspired to action both old and prospective members” (23). Handwritten minutes in the archives of CFUW St. Catharines report that on October 30, 1944, Dr. Macdonnell “addressed the local group of University Women on the various projects currently undertaken by the Federation – such as rehabilitation of women in the post-war world, scholarships to post-graduate students, the register of women graduates available for teaching posts in universities, vocational guidance bibliography for high school students, travelling libraries for young children in remote areas.”

Upon her retirement Ursilla joined CFUW Kingston and continued to be active in her community and her church. A dynamic woman who had taken up painting at the age of 35, was known to read Virgil in the original Latin, and enjoyed her garden, Dr. Ursilla Macdonnell made a lasting impression on the people around her and left a legacy of accomplishments through her perseverance and pursuit of knowledge.

“Arts and Commerce Co-Eds Entertain At Luncheon To Honor Their Graduates.” Winnipeg Tribune 1 May 1940: 10. Print.

Wright, Donald A. The Professionalization of History in English Canada. Toronto: University of Toronto Press, 2015. Print.