“Behold the turtle; she makes progress only when she sticks her neck out.” 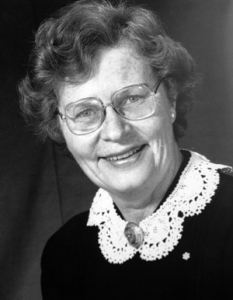 Born in Detroit to an American father and a Canadian mother, Roy Lawrence and Olive Pearl (O’Mulvenny) Cooper, Ruth Cooper learned early to adapt, be resilient, and work hard. Her early life, however, showed clear indicators of the creative, forward-thinking traits that were to illuminate her life. While in elementary school, she moved with her family from Detroit to Atlanta. When her father died in Ruth’s tenth year, her mother decided to move back to Ontario where she had family.

St. Clement’s private school in North Toronto became the place where Ruth first distinguished herself. She became Head Girl and, upon graduation in 1938, she received the Powell Memorial Prize for Resolution, Good Fellowship, and Integrity. Fifty-two years later, St. Clement’s honoured her with its Gold Award which is presented once every five years to an alumna who stands out as a role model and exemplifies the values of excellence and leadership (Bell 33).

The journey Ruth took in the half century between these two awards was demanding, crowded as it was with work, travel, university studies, marriage, politics, community service, and social activism. Her presidency of CFUW (1973-1976) was one of her many trail-blazing initiatives. An oft-quoted mantra of hers was “she who attempts the absurd, achieves the impossible” (Bell 71). Not just a mantra for others, it was at the core of Ruth’s own life, truly a most unusual journey.

After graduating from high school, Ruth had to support herself and found a niche in office procedures. One of her jobs was as immigration clerk for the US Consulate in Toronto where she met her first husband, William Rolph, an historian. Married in 1945, they began their life together at the University of Western Ontario where he had a teaching post. Not naturally a retiring faculty wife, Ruth proved to be a gracious, convivial hostess. She worked in the university library and this gave her a lifelong appreciation of libraries and archives. This passion led her to serve as archivist for several voluntary organizations including the National Council of Women.

Bill’s career took them to New York University for four years where Ruth’s university job entitled her to free tuition. Four nights a week she immersed herself in her studies and, in 1951, she made the Dean’s List, receiving “the ‘Evening Alumni Award for Scholarship, Character and Service to the College’ at its 120th NYU commencement ceremonies” (Bell 21). She was forced to give up her full-time studies at New York University due to Bill’s ill health, when in December 1951, she joined him at Tulane University in New Orleans. Undaunted, Ruth continued her studies at Tulane when Bill resumed his teaching.

They moved to Australia in 1952, when Bill was offered a five-year research fellowship at the new Australian National University in Canberra. Ruth, self-proclaimed “the most educated BA-less woman in the world” (Bell 26), made the most of her new experiences while continuing her own university education at the Canberra campus of the University of Melbourne. While she had energy to burn, her husband’s health, not particularly robust, declined. By Christmas 1953, Ruth was a widow.

Now just 35 years old, Ruth was once again on her own with few financial resources. Returning to Toronto, she obtained a position as Don at St. Hilda’s, a woman’s residence at Trinity College, University of Toronto. This provided her with room and board. It also enabled her to complete work on her first degree. In 1955, she graduated with a Bachelor of Arts in Political Economy. As she wrote later, to achieve this milestone she “had studied at five universities in three countries on two continents over a decade” (Bell 32).

In the fall of that year Ruth relocated to Ottawa where she joined the University Women’s Club. She became an economic researcher for the Progressive Conservative Party of Canada, a post she held from 1955 to 1957. One of her first assignments was to work with MP Ellen Louks Fairclough to draft “equal pay for equal work legislation” (Bell 36). This private member’s bill entrenching equal pay for equal work for federal government employees passed in 1956 (italics added). Interestingly, Ruth’s secretary during this time was Flora MacDonald, later to become a well-known parliamentarian and a Life Member of CFUW.

Ruth next moved to Montreal to work as a research economist for the Bank of Montreal (1957-1962) where she challenged her employers on subjects relating to women’s rights. She began postgraduate studies at Concordia University, continued at Waterloo, and completed them at Carleton in 1965. Nineteen years later, Carleton was to bestow on her an Honorary Doctorate in Laws for her extensive community activities.

Through the late Bill Rolph’s network of friends she was offered a position as a political science instructor and Dean of Renison College at Waterloo University. This position involved public speaking engagements that provided her with an opportunity to urge women to get involved in building communities by participating initially in local politics. It was a notion she promoted throughout the 1960s and 1970s because she saw politics as everyone’s business. She coined another aphorism for her female audiences: “You are a housekeeper. If politics is dirty, go in with your vacuum cleaner and clean it up” (Bell 47).

Ruth’s life changed dramatically when, in 1963 after a whirlwind romance, she married the Hon. R. A. ‘Dick’ Bell, an Ottawa-based lawyer and Conservative cabinet minister. With much in common and a shared deep passion for politics and community, they became a dynamic couple. Her marriage to Dick Bell enabled Ruth to divert her astonishing vigour into writing, teaching, and working in the volunteer sector to bring about legislative and social changes. She considered volunteerism the politics of conscience.

Taking this belief into next two decades with great vigour, she became involved with some 50 organizations at the municipal, provincial, national, and international levels. Although broadly based, many of these organizations were related to the advancement of women and equal opportunities for women and girls. In 1968 she became the President of CFUW Ottawa.

In the 1970s Ruth showed astonishing focus and tenacity at the national and international levels when she was Chair of CFUW’s Standing Committee on International Relations, CFUW President (1973-1976), and both member and Convenor of IFUW’s Membership Standards Committee (1977-1980). She attended a UNESCO Conference on the Status of Women, was a member of the Virginia Gildersleeve International Fund, and became a founding member and, later, Director of Match International. She was the YMCA’s National Council Director and chaired their Task Force on the Status of Women.

During her presidency of CFUW, Ruth proved to be a formidable and determined leader whose philosophy was incisive: communicate, co-ordinate, and consolidate. Her call to action during International Women’s Year (1975) had three components, reflecting issues dear to her heart. At the provincial level, she advocated for changes to family property law to make settlements more equitable for women; in 1978 the new Family Law Reform legislation came into effect in Ontario. On the national level her project called Foster the Roster promoted the notion that qualified women should be invited to boards, commissions and – a novel idea at the time – executive level positions. She tackled education by advocating for the removal of gender discrimination in the classroom in order to encourage young women to pursue such additional studies as engineering, science, business administration, and economics, Ruth’s own field.

Ruth contributed to the work of IFUW serving as Membership Convenor from 1977 to 1980. She was a member from 1980-1983 and then Convenor for three years of IFUW’s Status of Women and Cultural Affairs Committee. Between 1965 and 1983 she was a delegate to IFUW’s Triennials in Brisbane, Australia; Karlsruhe, Germany; Philadelphia USA; Tokyo and Kyoto, Japan; Sterling, Scotland; Vancouver, Canada, and Groningen, The Netherlands.

During this period she sat on the Board of Directors of the Canadian Commission for UNESCO (1976-1980). She pressed UNESCO to create a sub-Commission on the Status of Women and served as a founding member and its first Chair.

Ruth’s many activities led to additional memberships and associations linked to volunteerism and the status of women. The wide range and effectiveness of her efforts were recognized in 1981 when she was named a member of the Order of Canada. Many additional honours followed. One of the most valued was the 2005 Governor-General’s Award in Commemoration of the Persons Case, for which she was nominated by CFUW. Her citation read, in part: “she worked to open up boardrooms to women, reform pensions and family property law, protect children and end gender stereotyping in education, issues she first formulated while President of CFUW” (CFUW). Honours continued well into the 21st century as she was given the YWCA Women of Distinction Award, the Scotiabank Lifetime Achievement Award in 2007, and presented with Carleton University’s highest non-academic award, the Founders Award in 2008 (“Bell”).

Her tenacity and commitment were legendary. The friendships she made with many people from different parts of the world were what Ruth said she treasured most in life. It led her, she reflected, to a greater understanding of other people, other countries, other nationalities, and other cultures.

Ruth was once asked if she would consider herself a feminist; her answer was similar to Laura Sabia’s. Rather than the term “feminist”, she said she would describe herself as “a person working to improve the status of women by bringing about equality. [Her] approach was to persuade and educate” (Bell 115). She advised all women in whatever endeavours they chose, to realize their potential by employing their intelligence, using their trained minds, their energies, and their fellowship.

Ruth Bell died December 16, 2015, at the Ottawa Civic Hospital and was buried in Pinecrest Cemetery in Ottawa.