“To those of us who in the coming years will hold office, nationally or locally, may it be our first concern to give effective leadership – leadership which stems from a clear sense of purpose and which produces effectual meetings and a membership vital with intellectual force.” 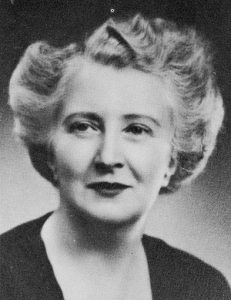 Martha Elsie Law was a bright, precocious child who grew up in an egalitarian rural household. Her father owned the prosperous Law Seed Company centered in Beeton, Ontario, and, as was the custom, the older son was groomed to succeed him. That left Martha, the third of four children, to follow whatever path she chose for herself.

After completing Grade 13 in the nearby town of Alliston, she taught school as had her mother before her. Following the death of her sweetheart in WWI, Martha “decided to attend University of Toronto…she applied for both dentistry and accountancy. Soon after she had entered the Royal College of Dental Surgeons, [1919] accountancy accepted her application, too late” (Flaherty 5). There, she found herself one of six women in a class of 320 students who became known as the “Whizz-Bang Class”. Composed largely of returning WWI veterans, this group was the largest dental class to date. The war brought attention to the field of health professions and Ontario was encouraging young women to enter dentistry in order to prepare themselves for public health work in rural and urban schools. Contemporary studies had revealed that women in male dominated professions such as dentistry were less likely to marry. This was the case with Martha who lived a fulfilling life as a single woman and who cherished her role as “Aunt Martha”.

Sociologist Tracey Adams, in her scholarly paper, “A Real Girl and a Real Dentist: Ontario Women Dental Graduates in the 1920s”, writes that although dentistry was very much a male dominated profession, there were enough women in dentistry in the early 1920s that they felt less isolated than their predecessors, and they appear to have been supported by many of their male colleagues and professors (337). Women graduates who were self-starters like Martha were able to build rewarding careers for themselves.

Martha graduated in 1923. An entry in Torontonensis, the university yearbook, says of Martha, “the earth hath pearls of great value as the water has, and she is one of them” (168). Martha found many interests at university; she became President of the Upsilon Alpha Sorority and she was an editorial member of the yearbook committee. Martha is pictured in the yearbook with the Anglican Club of which she was the recording secretary (328). She made many friends, a facility she demonstrated throughout her life.

Soon after graduation, Martha was appointed as a dental officer with the Toronto Department of Public Health and was posted to a working clinic in an east end Toronto school. When mothers learned that Dr. Law was understanding, approachable, practical, down-to-earth, and witty, it was not long before they brought more than their dental problems for her to solve. They knew they would receive advice, assistance, and help. Martha also made extra time for the provision of dental services at a preventorium, a type of sanatorium for children exposed to tuberculosis.

In 1926, Martha was reunited with her family when her father retired and the family moved to Toronto. This support system allowed Martha to pursue such interests outside her job as summers in Europe, interior decorating, gardening, bridge, golf, cooking, and, most importantly, investing and the Toronto Stock Exchange – the interest that was to become her first love! She studied it carefully all her professional life, becoming a wise and strategic investor.
During WWII Martha was a member of the Women’s Civic Employees’ Wartime Association and served as President for three years. Over the decades, she became a tower of strength in the Dental Alumni Association, serving as its Vice-President and Dental Editor of the Toronto University Monthly Magazine. Management clearly fit her like a glove.

Martha became a member of UWC Toronto and a strong supporter of CFUW. Recognized as a financial wizard with a flair for figures, she served as CFUW National Treasurer before becoming National President from 1952 to 1955. On becoming President, Martha was introduced to members as a woman whose “wise counsel has settled many a knotty point and her wit and gaiety brightened many a conference room” (Flaherty 5). During her time in office, she ensured that CFUW finances were put in excellent shape and for years she monitored its financial health.

Martha’s presidency was distinguished on many levels and signalled a major period of growth for CFUW. At her election during the 1952 Ottawa Triennial, she outlined the five-point program she intended to implement: an increase in membership by 20
clubs; the establishment of a permanent headquarters; the creation of a fifth scholarship designated for research in the Humanities; a more informed membership; and a greater appreciation of the achievements and potentialities of IFUW (Law 3).

Possessed of a vivid personality, boundless enthusiasm, and a keen sense of responsibility, Martha had considerable success during her tenure as president. Eighteen new clubs were established and membership increased by 1690 to 7427. To enhance communications, she visited all 80 clubs, and three times a year, distributed newsletters to each member through their local clubs. Martha was ahead of her time in her vision for a permanent national head office, however, as this did not occur until 1985. She oversaw the creation of two new fellowships: one in 1953 named for Dr. Margaret McWilliams, first CFUW President, (value $1200) and the other, in 1955, for Dr. A. (Allie) Vibert Douglas, the first Canadian to be elected President of IFUW (value $1500) (Law, CFUW History). Her emphasis on IFUW resulted in a large Canadian delegation of 42 members (News Letter 3) attending the 1953 IFUW Triennial in London, England, and in the highest per capita contributions by Canadian members of any national organization in IFUW to the relief fund dedicated to IFUW members displaced by the war in Europe. Martha received a Coronation Medal on behalf of CFUW and two tickets to attend the Coronation of Elizabeth II in June 1953.

In her final year as CFUW President, Martha presided over the 13th CFUW Triennial in Edmonton whose theme was “Constants and Variables – Our Changing Society.” As she stepped down as President, Martha expressed a strong feeling that CFUW members now formed a cohesive group able to achieve a high standard of effectiveness:

Let us hope, earnestly, that the . . . member organizations of CFUW-graduates of all ages, professions and occupations, distinguished and successful as well as our married women graduates who are the backbone of society – may continue to go forward as a Federation ever mindful of the purposes for which we were organized, especially for the benefit of others throughout the world as well as ourselves. (Law, The Chronicle 1953-1954: 3) For Martha, her role as part of CFUW was an unforgettable experience, exhausting physically, yet rewarding.

Over these years other organizations such as the Canadian Bible Society and the Toronto Granite Club benefitted from receiving the support and financial insight of this intelligent, vibrant, woman. At age 93, Martha died of congestive heart failure at her Toronto home and was buried in the Law family plot at Trinity United Church Cemetery in Beeton, Ontario. A CFUW memorial column after her death, summarized the success of her five-point program and acknowledged, “Dr. Law’s term as president of CFUW was a major period of growth of our organization. We are deeply saddened by her death” (The Journal 25).