“The framework of our organization with its varied interests and underlying unity of purpose can challenge the best thinking of every university woman graduate for many years to come.” 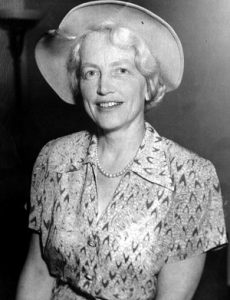 Born in 1900 in Quebec, Marion Elder Grant was the daughter of Donald Grant an ordained minister, and of Alice Fitch Grant, who was the second woman to receive a Bachelor of Arts Degree and the first to obtain a Master’s Degree from Acadia University. To these she added a second Master of Arts from McMaster University.

Marion’s early life was characterized by frequent moves and family upheaval, her father suffering from an undisclosed illness. When only six years old, Marion moved with her mother and her older brother to Wolfville, Nova Scotia, while her father remained in California. Her mother joined the staff of the Acadia Ladies’ Seminary and the private school associated with Acadia, Horton Academy. Marion lived in residence with her mother who was also Dean of Women while her brother lived off-campus with an aunt, as this was a girls’ residence. Marion’s formative years revolved largely around a “female family,” one that stressed the importance of higher education. Small wonder that Marion was studious and eventually followed an academic calling.

After graduating from Acadia in 1921 with a Bachelor of Arts in Psychology, Marion taught in Nova Scotia’s public school system for a year and then moved to Toronto to teach at a private school for girls, Branksome Hall. She simultaneously pursued a Master’s Degree in Psychology and Education at the University of Toronto which she completed in 1924. During this period she joined UWC Toronto. Two years later, she was off to Belton, Texas, to teach in the Departments of Education and Psychology at Baylor College for Women. By 1929 her first articles were appearing in academic journals and by 1931 she had earned a DPaed from the University of Toronto. During a sabbatical from Baylor between 1931 and 1932, she undertook further studies at University College, London, England. On her return to Baylor she added the duties of Dean of Women.

In 1936 Marion returned to Wolfville to help her ailing mother and to teach in Acadia University’s Departments of Education and Psychology. Three years later she followed her mother’s footsteps by becoming Dean of Women, a position she held for more than 20 years. In 1959 she became Head of the Department of Psychology, and remained Head until her retirement in 1975. Hers was an age when women undergraduates were closely supervised and she is credited with modeling new roles for female students.

As there was then no UWC in Wolfville, she and two friends, Muriel Roscoe and Esther Clark Wright – all of whom had been members in other clubs – founded UWC Wolfville in 1938. Marion took on an active role including that of helping to establish other clubs in the Maritimes. As early as 1940 she began a 15-year commitment to the National level of CFUW, becoming its 11th President in 1949. The theme of her Triennial was “The Challenge of Today and Tomorrow.” Marion’s focus was to improve the status of women and to encourage women first to pursue and then take advantage of their higher education. Like other presidents before her, Marion conducted CFUW business from her home base, Acadia University, with the assistance of UWC Wolfville member, Ruth Elderkin, who took on the role of secretary.

Under her leadership, four specific tasks were assigned to and fulfilled by the 1949-1952 CFUW Executive: prepare a history of the first 30 years of CFUW for her to present at the IFUW Triennial Conference in Zurich in 1950 (at which Canada was reported to be sending a delegation of 80); compile an up-to-date list of competent women representative of the Federation as a whole; produce and distribute a leaflet relating to the aims and objectives of the Federation for use in attracting recent graduates, and create a suitable national crest and charter for all of the clubs. In an age before easy airline transportation, Marion clocked thousands of miles by car or train as she traversed Canada to present newly created and signed club Charters to all 60 CFUW clubs, eight of which had recently been formed.

She also oversaw the implementation of the decision made at the Vancouver Triennial in 1949 to submit a brief to the Massey Commission “in the areas of Scholarship, Research in Education, a National Library, a United Nations Commission, and Radio and Television” (The Chronicle 1950-51: 29). Her National Board established the Margaret McWilliams Fellowship to honour the life work of CFUW’s first President. A Memorandum of Education, prepared by the Education Committee with the assistance of study groups in many of the clubs was submitted to the Prime Minister, Louis St. Laurent. Another innovation was a highly successful CFUW members’ art and book exhibit at the 1952 Triennial in Ottawa, one it was hoped would be repeated both nationally and regionally. Under Marion’s leadership CFUW clubs were urged to continue their expression of international goodwill by sending generous parcels of food and clothing to needy European members following WWII. She encouraged University Women’s Clubs to continue and expand the contacts/visits that had recently been made with members of the AAUW as she felt that the exchanges were both stimulating and informative. She also challenged members to strengthen further cooperation with like-minded Canadian women’s organizations in areas such as equal pay for equal work, more adequate provision for equality of educational opportunity, and better representation of qualified women on official bodies. Referring to the future, in her final report as CFUW President, Marion expressed a strong desire to see the international aspects of CFUW’s program strengthened. Her interest in CFUW never waned and, until her mid-eighties, she faithfully attended all CFUW Triennial and Council Meetings and IFUW Triennials. In 1971 CFUW Wolfville honoured her with a Life Membership “for being the club’s most faithful supporter and friend, a popular speaker, a tower of strength to the executive, and an authority where CFUW is concerned” (CFUW Wolfville Fonds).

Marion’s academic research focused on early childhood development, learning disabilities, and the importance of play. As well as publishing her work, she used knowledge gained from her research and studies to help found and serve on the Board of the Acadia University Institute, an umbrella organization within the university that supported research on sociological and economic aspects of the Annapolis Valley. Through that involvement she became, in 1955, a founder and builder of the Fundy Mental Health Clinic in Wolfville, the first such free-standing clinic in Nova Scotia, which through extraordinary teamwork and public-spirited leadership often led the way in its efforts to raise the standard of mental health in the community. Marion served this clinic as a psychologist providing family and relationship counselling – first part-time and later full-time – until 1975. One of her colleagues remarked that she was a promoter of good marriages and exceptional at marital therapy.

Professionally, she was an active member of the American Psychological Association, the International Council of Psychologists, the Association of Psychologists of Nova Scotia, the Maritime Psychological Association (serving as president and editor of its Bulletin), and Life Fellow of the Canadian Psychological Association. For her there was no boundary line between academia and applied psychology. She is quoted as saying that although she began as a teacher, in her first position as Dean of Women she received such extraordinary post-doctoral training in clinical psychology (including summer courses at Harvard, California, Chicago, and the Tavistock Institute in London) that her enthusiasm for working in that field soon equalled her delight in teaching, thus blending these two fields for the rest of her life (Witchett 85).

A well-known speaker, Marion also made time for community activities. She served as President of the Acadia University Alumnae Association, and as a long-time member of both the Acadia University Senate and the Acadia Board of Governors. She was a founding member of the Atlantic Baptist Fellowship, one of the first women to serve on the Wolfville Baptist Church’s Board of Deacons, and was a 50-year member of the local chapter of the Imperial Order of the Daughters of the Empire (IODE). Marion was once asked what she did in her spare time and she countered with, “What’s that?”

In 1959 she was asked by the then Minister for External Affairs, the Hon. Howard Green, to serve as a charter member of the newly formed Canadian Commonwealth Scholarship and Fellowship Committee. While serving on this prestigious committee, she was appointed a delegate to the Second Commonwealth Education Conference in New Delhi (1962) and later to similar conferences in Ottawa and Zurich. These experiences she described as “unforgettable.” Others indicated that her appointment brought distinction to university women in Canada as a whole.

Marion received many honours during her lifetime, beginning with being elected Vice-President of the Acadia Class of 1921. She received an honorary LLD from the University of New Brunswick in 1950; an honorary Doctor of Civil Laws from Acadia University in 1964, and the Centennial Medal of Canada in 1967. In 1984 during the centennial of Acadia University’s first female graduate, Marion was named Acadia’s “Woman of the Century” and was presented with a medal in recognition of her service to Acadia University and to the community at large. Her citation read in part: “A woman of eminence without pomposity, of presence without ostentation, of adaptability without inconsistency, and of gentle self-mockery and wit – truly Acadia’s woman of the century.” Later the lounge in Whitman Hall (more familiarly known as “Tully”), the residence of which she was Dean of Women, was named in her honour. In 1986, she was made an honorary member of the Acadia University Senate.

After her death in 1989 there were many tributes to Marion’s singular accomplishments; to her personal faith; to her community involvement, and to her enduring place in the life of Acadia. A Halifax Chronicle-Herald editorial stated: “The finest tribute of all is in the countless lives which she touched, always to the benefit and the improvement of those to whom she selflessly gave so much of herself.”