“Education in all its phases is the first interest of the new Federation.” 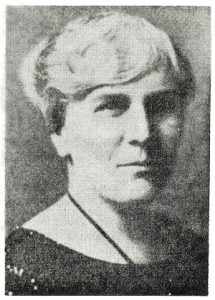 Margaret (Stovel) McWilliams, the first President of the Canadian Federation of University Women (CFUW), was a magnificent woman. In 1952, Dr. Ursilla Macdonnell described her as a woman who “threw into the work of developing public life in Winnipeg, and, indeed, in all of Canada, her magical gifts [including her] contagious sense of humour; and fine intelligence” (The Chronicle 12). Born in Toronto in 1875, Margaret became, in 1898, the first woman to graduate in Political Economy from the University of Toronto (Kinnear, Feminist 3). She worked for five years as a journalist, first in Minneapolis, then in Detroit, before marrying a young lawyer, Roland F. McWilliams, in 1903, and moving to Peterborough, Ontario. In 1910 they relocated to Winnipeg where she became very active in women’s social issues. She joined the Winnipeg University Women’s Club (UWC) and was President from 1913 to 1915. Since the early 1900s, university-educated women across Canada had been forming University Women’s Clubs.

Margaret firmly believed that “college women…occupy a strategic position” (Kinnear, Feminist 5) and a privileged place in Canadian society as members of the small minority of women who had been rather cautiously admitted to some Canadian universities in the 1890s. Strong-Boag reminds us: “In the first decades of the 20th century in Canada, women were defined and delimited not so much by a lesser capacity for work or determination or thought, but by patriarchal custom and male authority” (2). After a woman such as Margaret married, she would have been expected to refrain from working for pay outside the home. At the same time, there would have been expectations that as a university-educated woman and the wife of a lawyer, she would play a significant social role as a volunteer in her community.

There had been movements towards a national association of the University Women’s Clubs before WWI, but without success. In 1919, Dr. Winifred Cullis, a visiting British lecturer at the University of Toronto argued that this would be a good time for Canadian clubs to form a national organization of university women. She pointed out that the British and American Associations were discussing the possibility of forming an international federation of university women, and she wanted Canada to be among the founding members. When a group of women, Margaret McWilliams, president of the Winnipeg Club; Alice Cooper, president of the Toronto Club; May H. Skinner, Canada’s representative on the American Association’s Committee on International Affairs, and Laila Scott of the University of Toronto, met in Toronto in March 1919 (Berton and Coates 9), they unanimously decided to establish a Canadian federation and began the work of contacting all the clubs and creating a constitution. The first Chronicle (1920) indicates there were then at least ten clubs in existence including the four Alumnae Associations listed.

The organizational meeting took place in Winnipeg in August 1919, with delegates present from six clubs: Edmonton, Ottawa, Regina, Toronto, Victoria, and Winnipeg as well as the McGill Alumnae (Kinnear, Feminist 14; CFUW 62). Margaret was elected as the first CFUW National President. According to the Minutes of August 26, 1919, in addition to her leadership role in resolving difficulties and drawing up a constitution, because “she was an eastern graduate and resided in the West [Margaret McWilliams] was exactly the right President for our new Federation” (Kinnear, Feminist 75). At this time, the impact of WWI was being felt on the lives of women of all classes across Canada. Kinnear notes that “[Margaret] wished to rouse the privileged numbers of university graduates to be leaders of their communities, both local and national” (Feminist 5), as well as “pilgrims of peace abroad and pilgrims of understanding at home” (Feminist 159). Margaret articulated her sense of duty in a speech made in 1923: “The gift of a university education carries with it an obligation, to make return of service. Canadian democracy is committed in its very foundation to education, and this great experiment in human values demands . . . the intelligent support of those who have enjoyed its benefits” (Kinnear, “Social Gospel” 3). These sentiments have been at the heart of CFUW from its beginning.

Education, particularly women’s education, was declared to be the primary interest of the new organization. Two significant resolutions were passed at this first conference: the resolution to establish a yearly scholarship of $1000 for post-graduate study in another country, and the resolution to encourage members to submit their names as candidates for governing bodies of universities, colleges, and school boards. It was also agreed that the Federation would meet triennially with a council meeting in the years between Triennials.

Interestingly, the founding of CFUW came just three years after the refusal of Prime Minister Robert Borden to accept the nomination of Emily Murphy to the Canadian Senate on the grounds that under the British North America Act of 1867 she was not a person. Women’s organizations across Canada were incensed. It is not insignificant that, under the leadership of Margaret McWilliams, a hot topic of debate at this first CFUW meeting concerned the question of whether women should be encouraged to support membership in the Canadian Senate or should be encouraged to take part in all phases of political life. After much discussion the participants agreed they would support the principle of admitting women to the Senate.

The international connection was also very much a core principle of CFUW. At the first CFUW Triennial, held in Toronto in August 1920, it was announced that the CFUW delegation had been welcomed in London as one of the original members of the International Federation of University Women (IFUW) and that Margaret McWilliams had been elected Vice-President, a position she retained until 1923. At this first CFUW Triennial there was representation from ten clubs; CFUW now had 1123 members. Two significant reports with recommendations for action were presented to delegates: a report on educational conditions in Canada, and a report on job opportunities for university women in Canada. Another highlight of Margaret’s presidency came with the 1921 visit to Canada of Madame Marie Curie. At this time the Canadian Federation made a substantial contribution to the efforts being made internationally to raise funds to purchase radium for Madame Curie’s research (CFUW 63). By the end of her presidency in 1923, CFUW had grown to 16 clubs with 1300 members. Since its inception in 1919, it had awarded three Federation scholarships: to Isabel Jones of Toronto, for research on the early history of Canada at the Sorbonne; to Dixie Pelluet of Edmonton, for studies in botany at the University of London, and to Margaret Cameron, McGill and Radcliffe, for studies in comparative literature in Paris.

Following her presidency, Margaret chaired the CFUW International Relations Committee and continued her association with both CFUW and IFUW. Altogether, she attended more than ten IFUW Biennials, Triennials, and meetings. However, she was active not only in the work of the CFUW and the IFUW. In the tribute Dr. Ursilla Macdonnell offered at the 12th CFUW Triennial, Ottawa, 1952, she stated: “At one time or another she was President of every important women’s organization in the city [Winnipeg] and Dominion President of most. Her vigour motivated the Little Theatre, the Winnipeg Symphony Orchestra, the Arts and Crafts Association, the YWCA, and the progress of the University of Manitoba” (12). Margaret was active in the Red Cross, National Council of Education, National Council of Women, and the Women’s Canadian Club. She is credited with reviving the Manitoba Historical Society in 1944, and served as its president from 1944 to 1948. She was only the second woman alderman of the City of Winnipeg, serving from 1933 to 1940, during which time she was active in introducing legislation of benefit to women and children, including relief administration during the drought period. She was a frequent delegate to international conferences representing CFUW, IFUW, the Canadian Federal Government, or other organizations, and wrote numerous articles. For over 30 years Margaret maintained her monthly “Current Events” class “which involved continuing education in politics” (Kinnear, Feminist 4) and to which women came by the hundreds. As if these activities were not enough, she also wrote a number of books, including Women of Red River (1923), Manitoba Milestones (1928), This New Canada (1948) and co-authored If I Were King of Canada (1931).

With the advent of WWII, Margaret was active in urging then Prime Minister McKenzie King to include in his post-war rehabilitation planning a committee to study the problems of women who were moving from the armed forces and war industries to civilian life. When McKenzie King set up the Federal Advisory Committee on Reconstruction in 1943, she accepted an appointment as Chair of the Subcommittee on Post-War Problems of Women (Wylie 295). Its subsequent report, that “made twelve major recommendations many of which were still timely a generation later” (Kinnear, Feminist 144), became best-selling material for women’s discussion groups. In her address to CFUW members at the Silver Jubilee Triennial dinner in 1946, Margaret spoke at length about women’s role in the post-war world saying, “as a prerequisite to all, clear and decisive thinking is needed” and emphasizing, “good citizenship is no longer enough. The Nazis were devoted to the state, yet they brought it to ruin.” She further suggests that what is needed is a “master idea” and that idea is the pursuit of “excellence . . . which means never doing less than we can – never doing it less well than we can” (McWilliams 5-8). In If I Were King of Canada, written with her husband under the pseudonym Oliver Stowell, she had said, “What we should desire for Canada is an aristocracy, not of wealth but of brains.”

After her husband became Lieutenant-Governor of Manitoba in 1940, Margaret McWilliams served as a gracious and witty chatelaine of Government House. She received an honorary Doctor of Laws degree from the University of Manitoba in 1946 and the honorary degree of Doctor of Literature from the University of Toronto in 1948 (Wylie 296). She died suddenly in Government House in April 1952 and is buried in the Old Kildonan Cemetery in Winnipeg. During the Triennial in Ottawa in 1952, CFUW established the Margaret McWilliams Pre-Doctoral Fellowship in her honour.