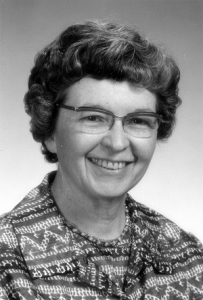 Margaret Fyfe Orange, the 17th president of CFUW, was born on August 8, 1918, in Cobalt, Ontario. She was one of six children of Joseph Bernard Fyfe and Mary Gertrude Fitzpatrick. After completing her elementary schooling in the Separate School system in Cobalt, she moved to Sudbury where she attended high school. Margaret then studied at St. Michael’s College at the University of Toronto, graduating in 1941 with a BA (Honours) in Modern Languages. She attended the Ontario College of Education, qualifying as a secondary school teacher, and did post-graduate studies in French at McGill University. Funded by an Ontario Department of Education Scholarship, she studied at the University of Western Ontario’s summer school at Trois-Pistoles, Quebec.

Before her marriage to Dr. Robert Orange, with whom she shared the adventures of raising a family of six, Margaret taught French, English, history, and vocational guidance at Sudbury High School. A glimpse of this young teacher was given by a member of the CFUW Mississauga club who was in Margaret’s grade ten class. She recalls that Margaret came to teach at Sudbury High School in 1942-43. She was a breath of fresh air. She had nylon stockings with seams [unusual because it was war time]. She was a very good teacher; she was bright and friendly and brooked no disruptions. At the time this student had no idea how young she was. As Margaret had graduated in 1941, this was, most likely, her first teaching position.

Later her friend, Dr. James Grassby, noted in May 1986, when she was presented a Fellowship of the University of Sudbury (one of the Federated Colleges of Laurentian University): “What a wonderful mix: communication in both our official languages, an understanding of the value of history to an understanding of the present, and a contribution to others through vocational guidance” (quoted in Stos 3).

In fulfilling the cherished responsibilities of her roles as wife and mother, Margaret Orange committed herself to community service through the Parent Teacher Association (PTA), the Marymount College Auxiliary, the St. Charles College Guide, and the Newman Club Alumni of Sudbury, always serving with dedication, distinction, and usually at the executive level. She contributed her skills through a variety of services to St. Joseph’s Hospital, Sudbury General Hospital, and various parish initiatives and activities. Both the Northern Ontario Catholic Register and CFUW’s The Chronicle benefitted from her contributions.

Her keen interest in education and communication, her willing involvement in community affairs, and her own deep sense of social responsibility as a woman, all found a natural expression in her participation in CFUW activities. As well as serving as President of the Sudbury Club, Margaret was Ontario Vice-President before becoming CFUW National President (1967-1970). She appears to have travelled widely in her first year in this position as she wrote in her greetings in the 1968-1969 The Chronicle: “It has been a most gratifying experience for me to visit so many member clubs across Canada” (5).

Writing about her term as President in “CFUW History 1967-70”, Margaret says: “Despite the greater range of our club activities during this period, and the formation of five new clubs, our membership declined somewhat and new and innovative means were explored to counteract this trend.” She continues: “To that end, a new format for our 18th Triennial Conference was initiated – a format designed to achieve the greatest degree of involvement by the CFUW members. The study-seminar part of the conference was the outcome of study programs in which our members had been participating in their own clubs across Canada.” (3) Earlier she had written in The Chronicle of 1969-1970:

In adopting this formula for a Triennial that marks the Golden Jubilee of CFUW membership in IFUW, we shall not only be adhering to Principle 5 of IFUW – ‘To foster a sense of social responsibility and encourage university women to place their education and professional training at the service of the community in local, national and international fields’ – but we shall also be declaring that as educated Canadian citizens, we recognize our responsibility to be generators of social change and improvement. (3)

She directed the conference planners “to produce any program changes that would make the meeting a contemporary one – to create a meeting that would reflect the changing interests of our Federation members . . . Over 70 percent of the clubs were actively involved in . . . the study program subjects which were Unrest in Education, Environmental Pollution, and Indians [sic] as Disadvantaged Canadians.” (Habron 10) It is particularly interesting that:

In order to have Indian people attend the conference, which was necessary in order to give real meaning to our understanding of their concerns and problems, the governments of Canada and Ontario gave CFUW a total of $8500. Although the meetings for the Indian people were organized by their own leaders, the CFUW organized the facilities and made the arrangements. (Habron 11)

It is not surprising that Margaret, a bilingual person, was keenly interested in circulating all national documentation in French as well as English. She writes: “Efforts to circulate all our documentation in French met with only limited success, owing to the costs involved in obtaining qualified translators, but in July 1970 your President approached the Department of the Secretary of State for financial assistance in this regard. (See Editor’s Note at the end of this biography.) We are indebted to the many ‘volunteers’ within the Federation who ‘donated’ their expertise in the interim” (Orange and Monty 2).

Margaret was a member of the 1966 IFUW delegation to the UN Commission on the Status of Women in Geneva. She led a CFUW delegation of 50 women to the IFUW Triennial conference in Karlsruhe, Germany (1968), and later attended the Triennials in Philadelphia, USA (1971), and Kyoto, Japan (1974). In Stirling, Scotland, in 1977, she was elected the fourth Vice-President of IFUW. Margaret was a member of the Ontario Council for University Affairs and served on the Board of Governors of the Elliot Lake Centre for Continuing Education. She was a founding member of the Board of Regents for the University of Sudbury and was Dean of Women at this university. In 1978 Laurentian University granted her an Honorary Doctorate in recognition of her achievements and valuable contributions locally, regionally, nationally, and abroad. Today two Margaret Fyfe-Orange Memorial Bursaries of $1000 each are awarded to female students enrolled full time in the second, third, or fourth year of any program at Laurentian University, preferably to those students whose studies have been interrupted for a year or more (Laurentian University Website).

Margaret Fyfe Orange was an intelligent, thoughtful, and compassionate person, gifted with faith, integrity, dedication, a delightful sense of humour, and a great capacity for sharing her enjoyment of life. She distinguished herself in all her endeavours and she endeared herself to those who came to know her as a true friend. Perhaps the best description of her philosophy and approach to life is one she offered herself to the Western Ontario Regional Conference on May 29, 1966, when she was CFUW Vice-President Ontario. Speaking as a woman and member of CFUW, she encouraged others to recognize their responsibility to their community:

Because I am a woman, I possess special qualities and capacities – qualities of love, compassion, patience, and endurance, and the capacity to know, to care, and to create. I am a citizen of a country that has proven that it had the talent and intelligence capable of inventing the telephone, discovering insulin, and conceiving the cobalt bomb. And my country may be the richest nation of all in natural resources. I had for my forebears stalwart men and women, who fled economic and educational inequalities to found a new home in a strange and frozen land – but a land of opportunity. Theirs was not the role of spectator, but of the participant, one who plays a conspicuous part or fulfils a necessary function. It had to be such a role in order to ensure the survival of the community. (quoted in Stos 3)

Margaret Fyfe Orange was indeed a participant, and one who will always be remembered with pride and affection. She died on May 1, 1987.

Editor’s Note 2016: See the biographies of Jean Steer and Eileen Crawford Clark where it is noted that the Secretary of State granted monies in aid of promoting bilingualism in CFUW.