“Within CFUW we try to learn from one another, to build bridges across professional, social, political, religious and cultural boundaries, to respect different opinions, and to understand and appreciate those who hold them.” 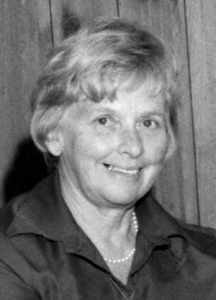 Margaret personified CFUW. She was the ideal modern woman of the mid-20th century, someone who did meaningful volunteer work and lobbied for change on behalf of other people – today we call it advocacy – at the same time maintaining her important status as wife and mother while being recognized as a ‘lady’. This, to Margaret, meant showing consideration and genuine interest in the lives of others while being fastidiously groomed and appropriately dressed for every occasion.

Margaret Strachan Addison was born in Nanaimo, but grew up in Vancouver, graduating from the University of British Columbia with a degree in Applied Science in Nursing in 1940. She and her husband, Edward (Ted) Strongitharm QC, returned to Nanaimo in 1948 where they raised their four children. Her interests were numerous and various and she was a strong advocate of health, education, women’s equality, and art and cultural issues.

Margaret’s community involvement in Nanaimo dated from the early 1950s and continued throughout her life. Working as a public health nurse, she recognized the need for affordable, accessible, quality care to help families and the elderly. Margaret helped establish the first non-profit day care society in Nanaimo. She is fondly remembered by childcare operator, Kathy Torhjelm, for her support and knowledge of important issues, particularly as they affected women and children. Margaret also served three years as Chair of the Central Vancouver Island Health Board where she was involved in making home support services available in Nanaimo. In addition, she was a national director of the Multiple Sclerosis Society.

She did not limit her activism to the area of health. She was President of her local PTA, served three terms as a Nanaimo school trustee (past Chair), and was a member of the Board of Malaspina College. Margaret was proud of her time as Chair of the British Columbia Human Rights Commission (1979-1981). Having a keen interest in civic affairs, she also served three terms as a Nanaimo City Councillor and six years as a Commissioner of Nanaimo’s Parks, Recreational, and Cultural Commission. Perhaps her greatest community accomplishment was her vision for the establishment of the Port Theatre, an arts and culture centre in Nanaimo, and she worked tirelessly as a member of the Arts Council and as a founding member of the Nanaimo and District Harbourfront Centre Society to ensure its funding and development.

Against this background of community activism is set Margaret’s involvement with CFUW. She joined the Nanaimo club shortly after its formation in 1945, later serving as its President from 1951 to 1953. From its early days the Nanaimo group was active in the areas of education, support of women for public office, and community social needs, all areas of interest to Margaret. Throughout the years, she served in many roles, both provincially and nationally, but she always remained a staunch supporter of her home club, taking time to encourage and mentor other members as they took on leadership roles.

Margaret’s crowning achievement in CFUW was her election as National President in 1982. Until that year, it had been the practice in CFUW for the presidency to alternate between Eastern and Western Canada. Breaking with tradition, Roberta Brooks campaigned vigorously that Margaret should follow Jean Steer of Saskatchewan because she was “the candidate of choice”. At that point, Margaret had already served as Provincial Director for BC West (1972-1976) and then as both Provincial Director BC East and Vice-President for Western Canada (1976-1979). She became national CIR in 1979, representing CFUW at IFUW meetings as a voting delegate and leading Canadian delegations to several IFUW world gatherings.

That Margaret was well aware of the challenges facing CFUW was evident in her remarks as President-Elect: “In a time of significant social advance, economic uncertainly and extraordinary technological advance, members of the Canadian Federation of University Women must not only be well informed on relevant issues, but must also be prepared to take responsible action at local, provincial and national levels” (Journal 22.7 (1982): 4). She then suggested the following to achieve the Federation’s goals and objectives effectively:

Throughout her term, Margaret continued her emphasis on the broad value of CFUW: “We, as educated, well-informed women, members of an influential national organization . . . must continue to participate not only in national issues but also participate in these issues globally. We must use our knowledge and influence in the shaping of attitudes and values at the international level” (The Journal 23.5 (1984): 1).

“Where are they?” asked Margaret in reference to women graduates of all ages and academic disciplines who were not members of CFUW. She thought it was necessary that CFUW undertake a serious self-examination before it could “make a decision as to what kind of an organization we are and what our role will be in the challenging years ahead.” Only then could the organization “attract more university graduates and accept a stronger, more visibly effective role in the shaping of our country” (The Journal 23.4 (1984): 1). By the end of her term, CFUW had expanded by six clubs.

During her presidency, representations based upon resolutions passed at national meetings were made to a wide variety of government agencies. These included resolutions on the Charter of Rights and Freedoms, pornography, pension reform, and peace and security as they impact women. The CFUW Constitution was amended to include the “Urgent Resolution” mechanism, enabling a mail-in vote when time was short. This meant, for example, CFUW could present briefs to the Government-appointed Fraser Commission on Pornography and Prostitution. Margaret believed that the theme of her Triennium, “Women’s Work – The Reality of Tomorrow” was an area of universal concern needing study and action. It complemented the UN Decade for Women, with its emphasis on Women in “Equality, Development and Peace”, and the IFUW Study and Action Program – “Beyond the Decade for Women – Planning Toward 2000”. She mentions having attended recently the 5th Biennial Conference of NAWAL -the National Association of Women and the Law and quotes extensively from a presentation made at that conference. The 20th speaker said, among other things “we must head off the confrontation between home-based and job-based women for economic recognition . . . and TOGETHER [work] . . . to greater economic justice for women and a more humane work/home world for women, children and their men” (The Journal 23.2 (1983): 1). She felt that great steps had been made toward linking Canadian women to those of the Third World through two major conferences. The first was the Asia-Canada Women in Management Conference in Victoria, a joint effort of CIDA, IFUW, and CFUW chaired by Margaret herself, and the second was the Women’s International Peace Conference in Halifax, co-chaired by CFUW’s Peace and Security Committee.

As outgoing President, Margaret acknowledged that self-examination of CFUW practices and procedures had been intended to enable the Federation to respond quickly, effectively, and responsibly to critical issues. One result was the establishment of the National Office (then referred to as Head Office) in Ottawa. Her term was the last time the office moved its location to where the President lived, a burdensome policy in the days before computers, e-mails, and instant messaging. With Nanaimo club member Jo Lane, as her assistant and CFUW Executive Secretary, she investigated possible locations, and finally, a decision was made at the CFUW 1985 Triennial to establish a permanent office for communication and storage of information in Ottawa.

After her term as CFUW President, Margaret continued her service in civic affairs in Nanaimo. Always a strong advocate, Margaret, calling upon her nursing background, encouraged the development of policy on new reproductive technology and, as a result of her efforts, CFUW influenced the work of professional agencies and government in this area. She was always proud of the fact that, on her recommendation, Roberta Bondar, the first Canadian woman in space, was made an honorary member of CFUW.

Accolades for Margaret’s activism came from many varied sources. In recognition of her contributions to her community, Margaret was named Nanaimo’s Woman of the Year (1968), Arts Leader of the Year (1995), and Freeman of the City (1996). She was awarded an Honorary Doctorate of the Humanities in 1999 from Malaspina University-College an institution since renamed Vancouver Island University. Other acknowledgements include the annual CFUW Nanaimo Margaret Strongitharm Memorial Award of $1 000 and the naming of the Margaret Strongitharm Gallery in the Port Theatre, Nanaimo in 1998. In 2000, Margaret was invested as a member of the Order of Canada, which recognized her as an icon in the community for her 30 years of voluntary involvements in such areas as health care, human rights, education, culture, and women’s issues. When Margaret returned proudly wearing her medal, city officials, school board members, politicians, media, volunteer organizations, including CFUW members from Nanaimo and beyond, came together in a huge celebration at the Port Theatre that Margaret had helped bring to reality. In 2005, she was honored for 55 years of service to CFUW (“In Memoriam”: 7).

After her death in 2008, she was remembered as a serene and calm woman with a wise, gentle approach and a positive, moral attitude, “one of the more giving people for the good of her community . . . one of the half dozen who could change a community” (“City Activist”).