“Women must now strike out against atrocious laws of marriage and crippling taxation. They must become leaders of thought and demand change in the present discrimination legislation.” 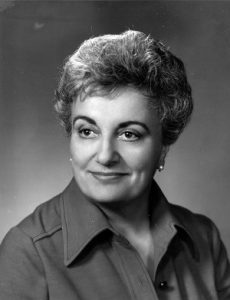 Laura Sabia’s daughter, Maureen, said of her mother: “All her life Laura Sabia dreamed dreams for women . . . ‘equality of opportunity’ and ‘choices’ were her mantra. With unflagging determination she set about raising Canadian consciousness level about its treatment of women” (Sabia, M). The source of Laura’s dreams is not hard to identify; they were planted in her mind at an early age by her father, Pasqualle Villela, a far-sighted Italian immigrant, who believed that “anything a man could do a woman could do better” (Sabia, “You”), and who encouraged Laura to think and act for herself. Her mother, Aquilina, the spirited daughter of a blacksmith, was Laura’s model of a strong, capable woman. It wasn’t surprising that Laura became a self-confessed rebel, even while attending a private convent school in Montreal, and grew up to become an outspoken visionary, independent thinker, and trailblazer in her community, province, and country.

Laura was born in the small Ontario town of Pembroke, but all her memories began in Montreal where her prosperous family moved when she was two years old. Laura suffered what she felt was the ignominy of being the child of Italian parents; her loving and supportive family were not enough to shield her from the teasing and name calling at school. As a child, she came to hate being Italian. Her sense of not belonging pursued her throughout her schooldays and influenced her in various ways throughout her life.

Laura attended McGill University and graduated in 1938 with an Honours degree in Languages. At McGill she met, and in 1939 married, Dr. Michael Sabia, a young surgeon. In 1940 his work took them to St. Catharines, Ontario, where Laura lived the life of a well-to-do, stay-at-home mother. She and Michael raised four children and Laura instilled in them her sense of responsibility to society, teaching them that there was no end to what they could accomplish if they applied themselves. Theirs was a comfortable, happy home but in spite of this Laura herself was restless; she wanted and needed more mental stimulation. One such stimulant was CFUW. Laura joined the St. Catharines club in the early 1950s and on May 10, 1955, became Club President.

Laura also embraced a variety of volunteer opportunities in the community and, by 1953, had become the first woman member of the St. Catharines Separate School Board, remaining in office for four years. In time, however, she came to believe that she could no longer support separate schools. Laura turned to municipal politics, serving as city alderman for three terms (1962-1968). In June 1968, The St. Catharines Standard reported that at Laura’s retirement party the Mayor presented her with a spoon “to stir up things.” That same year she ran, albeit unsuccessfully, for the mayor’s job and for a seat in the Federal Government as a Progressive Conservative.

Laura’s community involvement did not prevent her from moving up in CFUW. When the office of Provincial Director, now Regional Director (RD), was instituted in 1958, Laura was elected to represent Western Ontario, the region that had the greatest number of clubs. During her term Laura visited them all. In 1961 she was elected as CFUW Vice-President Ontario. As VP Ontario, she spearheaded a campaign to have widows exempt under the succession duties laws of Ontario. In 1962 Laura was the winner of the IFUW bursary to attend the meeting of the United Nations Commission on the Status of Women. She returned from New York with a new understanding of the position and power of politics in women’s issues.

In 1964 in the middle of a revolutionary decade that matched her personality, Laura was elected National President of CFUW. Society in the 1960s was in flux; old values were being challenged and new ones were evolving. Her final year as President, 1967, also marked Canada’s 100th birthday. What better time for centre stage to be seized by an outspoken woman, who was quoted in The St. Catharines Standard February 26, 1957 as saying “Women will never take their proper place in the community and national affairs until they decide to go after it” (quoted in Harapiak). Furthermore, it was obvious that she intended to take the members of CFUW with her. During her presidency, CFUW undertook a Survey on Continuing Education and chose the theme “The Arch of the Century” for its 17th Triennial in Vancouver. She led CFUW in presenting briefs to the federal government on divorce, domicile, taxation, the minimum age of marriage, and women’s health.

Laura realized that for many years the deputations from women’s organizations to the federal government had been politely heard, complimented, and quickly forgotten. For her this was absolutely unacceptable. Early in 1966, on her own initiative as President of CFUW, Laura wrote to 40 influential women’s organizations nationwide. She organized a meeting of their representatives, which was held at UWC Toronto’s clubhouse. They formed a committee for the Equality of Women, later named the Ad Hoc Committee on the Status of Women.

Laura then worked in concert with Liberal cabinet minister, Judy LaMarsh, to spearhead the formation of the Committee for the Equality of Women in Canada. What they and CFUW wanted to achieve was nothing less than the establishment of a Royal Commission on the Status of Women. Laura played hardball with Prime Minister Lester B. Pearson and warned that if he did not cooperate, she could bring two million women to march on Parliament. The tactic worked and the Royal Commission was set up in 1967. Minister LaMarsh later said she would have been unable to convince Prime Minster Pearson to act without the organization and pressure exerted by Laura Sabia, who for the first time brought together women’s groups in Ottawa to speak with one voice (302).

Laura continued to work with the Committee for Equality, which later became the National Action Committee on the Status of Women (NAC) and served as its first Chair from 1969 to 1973. NAC was a non-partisan lobby group designed to push for the implementation of all 167 recommendations of the 1970 Report of the Royal Commission on the Status of Women. NAC grew to be Canada’s largest women’s organization and by the 1980s, represented more than 700 women’s groups. Its success was achieved by bringing together opposites: conservatives and radicals, or as Laura described it, “hob-nailed boots and the white gloves set” (Anderson). Michelle Landsberg in Writing The Revolution, claims that “[NAC’s] vigorous leadership, commanded public attention and influence far beyond its founders’ dreams” (259). The 1970’s were equally exciting. In 1973 Laura was appointed first Chair of the Ontario Advisory Council on the Status of Women, a post she gave up in 1976 citing lack of support of the women themselves. She, who had expected so much of CFUW, felt she had been sadly let down by her own organization. She said, “CFUW should have led the way to equality. It had all the leadership qualifications. It chose to drag its feet in refined clay” (The Chronicle 49: 6).

In her book Ten Thousand Roses: The Making of a Feminist Revolution, Judy Rebick points out that by the end of the 1960s there were three streams of feminism in Canada: the Voice of Women peace activists; the middle-class mothers and career women who belonged to established groups such as CFUW and the YWCA; and the young radicals. Laura, of course, spoke for the middle group (13).

Never one to rest on her laurels, Laura forged on. From 1971 to 1977 she hosted a comment program on radio that involved hours of preparation time. She was in her element. She spent three hours a day reading national and international newspapers to keep abreast of issues and even read for pleasure Hansard, the transcripts of Parliamentary debates in the House of Commons. She sat in on the short-lived Feminist Party of Canada but she soon withdrew because she thought that women would be ghettoizing themselves. By 1976 Laura was writing a twice-weekly column of political criticism for the Toronto Sun and did a weekly editorial newscast for CITY TV.

Laura’s lifelong interest in the stock market stemmed from her childhood, when her father taught her to invest in stocks of her own choosing. Feeling that women should understand such subjects, she ran investment classes for women and founded more than 12 investment clubs across Ontario. By 1980 Laura had lost her husband, her children were grown and living in Toronto, and unknown to many, she had developed Parkinson’s Disease. It was time to sell the big house in St. Catharines and move to Toronto. Here she threw herself into a by-election as the Progressive Conservative candidate in the Spadina riding, placing third. She considered running again in 1984 but her health dictated otherwise. In 1985 she was appointed to VIA Rail’s Board of Directors. She was also President of the YWCA in Toronto and member of its National Board. Laura continued to stay connected to CFUW St. Catharines after she moved to Toronto. She returned to meetings to speak and opened her home in Toronto to members who were attending CFUW functions. In 1984 CFUW St. Catharines presented her with an Honorary Life Membership.

Laura was noticed and recognized throughout her life. In 1974 Governor General Jules Leger made her an Officer of the Order of Canada in recognition of her 15-year efforts promoting women’s rights. Five years later, Brock University in St. Catharines bestowed on her an Honorary Doctor of Laws. In 1977 she received a Queen’s Jubilee Medal; ten years earlier she had been given a Centennial Medal, and in 1983 she was accorded a Governor General’s Award in commemoration of the Person’s Case. This award recognized outstanding contributions toward improving the status of women in Canada. In 1991, she received her second honorary degree from her alma mater.

After her death, in 1996, Doris Anderson wrote of her in a “Lives Lived” column for the November 6, 1996, edition of the Globe and Mail. She described Laura as “warm, generous, an inspired cook, a lifelong knitter, nurturer of plants, and a devoted mother and grandmother, but as a champion for women she was often quite impatient. When she disagreed with mainstream stances, she never hesitated to give the movement a piece of her mind and a sample of her sharp tongue.” The column noted further that at her funeral, her daughter Maureen had read from one of Laura’s own columns which reflected her unrepentant public persona:

I have fought my church, taken issue with the Pope, and loved every clashing, sparkling moment of it: the harder I fought the better I liked it. I made some outrageous statements, the better to shock. I would not change a word of them, ever.

LaMarsh, Judy. Memoirs of a Bird in a Gilded Cage. Toronto, Montreal: McClelland and Stewart, 1969. Print.