“Many are the opportunities for university women to give leadership and service. Let us not be found wanting.” 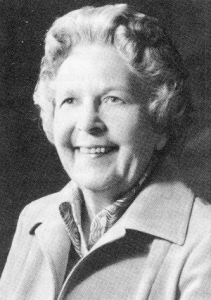 Jean Steer was a splendid example of intelligent leadership and dedicated service to her community and country. She was born Jean Gesner Battersby in Broderick, Saskatchewan, in 1912, into a family descended from United Empire Loyalists. Six years later they moved to Hawarden, Saskatchewan, where she received her elementary, secondary, and music education, completing her Grade 12 at Saskatoon. In 1932, she graduated from the University of Saskatchewan with a BA (Honours) in French and English and in the following year received her BEd with distinction.

An educator in spirit and by vocation, she held teaching posts at Gull Lake, LIoydminster, and Luther College, Regina. She also used her talents to revise the curriculum at her church school in which she taught for 15 years. While teaching at Lloydminster she married Paul Steer. Jean and Paul had two children, Ron and Susan.

Leadership ability manifested itself early in her life. As a university student, she was the Class of 1932 Vice-President; a contributor to the Sheaf and to the Social and Literary Directorate, and a member of the SCM. In the summers of 1930 and 1931, she travelled by family car across the rough roads of rural Saskatchewan, Manitoba, and Alberta to publicize and prepare tents for the travelling Chautauqua performances in the fine arts. The Chautauqua movement arranged rural travelling summer fairs of entertainment and lectures for the purposes of enhancing democracy, co-operation, and community and political discussions. These experiences provided an excellent foundation for her later involvement in CFUW.

Her commitment to university education led Jean to hold national positions in CFUW as RD Saskatchewan from 1970 to 1973, and Vice-President West from 1973 to 1976. As Vice-President, she promoted and developed Provincial Councils, visiting all clubs in Manitoba, Saskatchewan, and Alberta, and five clubs in British Columbia.

Jean became National President in August 1976 during a period of crisis when both the rise of regionalism and the escalation of inflation threatened the very existence of national organizations. In November of that year, the Parti Québécois won the election in Quebec and announced as its policy the eventual separation of Quebec from Canada. From that time, Jean devoted her energies to the promotion of unity within the Federation and within the country. She realized that to achieve unity one must have understanding, and the best means to understanding was improved communication. Therefore, she applied for, and received, a three-year bilingual development grant from the Department of the Secretary of State, which permitted CFUW to translate all its documentation and most of its correspondence into French. She also obtained a second grant, used in assisting clubs and regions to hold mini-conferences on Canadian unity. She pursued the cause of Canadian unity relentlessly, using it as her theme in addressing clubs in all provinces and presenting a brief to the Pepin-Roberts Task Force. She led the CFUW delegation at the 1977 Destiny Canada Conference at York University.

Another of her concerns as President was to put the Federation on a more viable financial footing, by reviewing the structure of the Executive to make it less costly and more effective, and by promoting the CFUW Charitable Trust to make more secure scholarships, fellowships, and creative arts programs. The CFUW Fellowships Program was revised and she spearheaded the expansion of CFUW’s Charitable Trust. As a Diamond Jubilee project, the history of CFUW was updated and published in the form of a calendar-history. When she retired from office in August 1979, she left a flourishing Charitable Trust and a united federation of 12 000 members whose primary goal was working for Canadian unity.

A gifted speaker, Jean travelled across the country seeking support for two major undertakings: strengthening the scholarship program, and promoting national unity. She addressed some sixty clubs, as well as eight regional conferences, and a number of workshops, on the thesis that true federation and Canadian unity can only be built upon a solid foundation of mutual understanding and co-operation. She emphasized the role of education in furthering national unity, and she reminded all women university graduates of their obligation to help support university scholarships. Jean showed a genuine desire to understand local challenges, and was careful to explain the problems encountered in other regions. Her visits to clubs gave her great pleasure and she was always ready to listen and was open to new ideas. As a presiding officer at meetings, her manner was one of efficiency, impartiality, and graciousness.

Jean was also actively involved in IFUW, but recognized that “the IFUW must put its house in order if it expects to retain the support of its affiliates”, and that CFUW members “could not support the IFUW if it meant eliminating other CFUW programs” (Journal 21.9). Working together with AAUW, the CFUW Executive developed a proposal for the revision of IFUW By-Laws for a more simplified structure, for reduction of budget expenses, and for changes to the dues structure for affiliates. These revisions were presented at the IFUW Triennial Conference in Sterling, Scotland, in 1977, as well as at the IFUW Council in Geneva, Switzerland.

Solutions to the problems facing both CFUW and IFUW would be neither simple nor easy. In one of her last messages as President, Jean wrote:

CFUW is about to celebrate its 60th anniversary and much of what it does is routine and familiar to us all. Quite naturally, we would like to continue as we have in the past, along paths which are known to us, and on which we feel secure. During the triennial period just coming to a close, however, CFUW has faced numerous problems for which its Executive Council is seeking solutions. These solutions may require change – in some instances very slight, in others quite fundamental. We have reached a period in our history when we must alter our course if we are to survive and at the same time be effective. This may require a greater flexibility on all our parts than we have ever before been called upon to display. (Journal 21.8)

She was always involved in community health, environmental, cultural and arts groups. Whatever activity engaged her interest received her strong, intelligent, and vigorous support. A woman of eclectic interests she was an ardent fan of the Saskatchewan Roughriders football team all her life. Jean served the Regina Symphony Orchestra as Chair of the Women’s Association, Vice-President for Administration, and Chair of the Board of Governors, and she was responsible for raising funds to erase the organization’s staggering debt. In recognition, the first concert of the orchestra’s 75th year was dedicated to Jean with “Love, Gratitude and Admiration.”

At the end of her term in office in 1979, Jean wrote, “With the fellowships program secure, with financial and structural change initiated for IFUW, and with improvements in CFUW structure in sight, the members of CFUW may now devote more time to external matters – to co-operation with other women’s groups both in Canada and beyond its borders in order to improve conditions for women; to working for appointment of women to boards and commissions and their election as members of legislatures and of parliament; to maintaining high standards in education; and to the building of a Canadian culture and a Canadian identity” (The Chronicle 52: 4).

In May 1982, the University of Saskatchewan conferred on her the degree of Doctor of Laws, honoris causa, (in absentia due to illness), received for her by her daughter and son. The University of Saskatchewan was dear to her and she was very proud of the fact that she, her husband, her daughter, her son, her daughter-in-law, and her son-in-law, each held two degrees from this University, a tradition she hoped would continue for her grandson and granddaughter. It is appropriate that, at her death in 1982, her family requested that In Memoriam donations be made to the CFUW Charitable Trust to support graduate fellowships.

A CFUW tribute after her death said, “Jean will go down in CFUW history as one of our best presidents for whom respect and affection increased with the passing of time. The results of her three-year term of office will be far reaching” (The Chronicle 53: 28). She possessed to a rare degree the ability to delegate, an essential quality of leadership. The women who served CFUW during Jean’s presidency will never forget her dedication to office, the challenge of her ideals, the strength of her leadership, and the warmth of her smile.