“We are living in the midst of a renaissance, not a reformation, and CFUW must recognize, accept, and influence social change.” 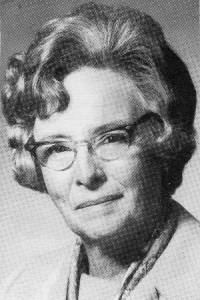 Gwendolyn Black led a remarkable and challenging life with a reputation for good cheer and conscientious leadership. She was born in Medicine Hat, Alberta, to Nathaniel and Statira McDonald. When she was six, her father, a Methodist minister, died. Her resourceful mother, who had earned a Master’s Degree in 1908 from Acadia University in Wolfville, Nova Scotia, had to return to her former life as a teacher. Statira resumed teaching at Lasell Seminary for Young Women in Massachusetts and eventually became its Dean. There in Massachusetts, Gwen grew up among independent women, became an American citizen, studied music, and became a very accomplished pianist. At the age of 18, she came back to Canada to attend Mount Allison University in Sackville, New Brunswick, the first university in the British Empire to give a degree to a woman (1871). In 1933, Gwen completed a Bachelor of Music degree, the first awarded by the university since 1912.

After some months in Europe and part-time employment in New England, Gwen was invited back to Mount Allison’s Ladies College to teach music. When she was 25, she married and settled down to spend the rest of her life on a commodious property on the outskirts of Sackville. She was eventually to have four children and become immersed in the welfare of her community. In 1947, she became a charter member of the Sackville club of CFUW, and 47 years later was made a life member of that club.

Throughout Gwen’s life fair play and justice were important values to her, and she contributed significantly to the improvement of life for women in her community and in Canada. She led by example through her involvement with a wide variety of organizations. In 1946, for instance, she was president of the local chapter of the Victorian Order of Nurses and later was appointed to its Board of Governors. She was also active with the Children’s Aid Society, the Sackville Memorial Hospital, the Sackville Art Association, and the Canadian Association for the Mentally Retarded [sic]. She was a Vice-Regent of the IODE and served as a long-time member of Mount Allison’s Board of Regents, Senate, and Library Committee. Moreover, she was a member of the President’s Committee on the Status of Women. Gwen was liberal in her gifts to the university and most particularly to her first love – its music department. Her generosity was recognized formally in 1970 when the university awarded her an Honorary Doctor of Laws Degree (LLD) (CFUW News 17.1) and, in 2003, bestowed upon her the Charles Frederick Allison Award for outstanding and continuous support to the university (Motyer).

Prior to becoming CFUW’s 18th President in 1970, Gwen served as President of the Sackville club, moved on to be Provincial Director for New Brunswick and then Eastern Vice-President. During her national presidency, Mount Allison University made available to her a lower floor room in the newly completed library that served as her office, staffed by two CFUW colleagues who were Secretary and Treasurer. Unless she was travelling across Canada visiting other clubs or attending meetings, she was in her office every day for she regarded her Triennium as a full-time job.

Although a powerhouse herself, Gwen found her first year as CFUW President overwhelming as she came to realize that national issues were wide-ranging, intricate, and complex. It was her view at the time that the general membership was most effective working in local communities where women could accomplish more by responding to the needs of people around them, as she had done herself. Throughout her presidency she stressed the importance of local initiatives. “Community involvement serves not only the local need but generates a more comprehensive view of larger problems.” She added:

It is difficult to take part in any local venture without becoming aware of the need to survey, compare and develop from the experience of others as well as one’s own. This notion is not always recognized as the principle of federation: nevertheless it is the stirrings and rumblings of CFUW initiated by the clubs instead of imposed by the administration. (The Chronicle 45: 3)

Over time, she came to appreciate the fact that the opinions of CFUW on national issues were both respected and welcomed by the government in Ottawa. “This confidence has been won for us by our predecessors,” she said, [and] “we must think clearly and constructively if we are to make proper use of it. Above all, we must not neglect the opportunity to make our views known to those who legislate, even better, elect women legislators” (The Chronicle 44: 1).

CFUW was then promoting the election of women legislators at the federal, provincial, and municipal levels. To that end, Gwen drew up an application form and asked members to nominate capable women qualified for appointment to Federal Boards and Commissions. Subsequently, biographies of 50 suitable women were submitted to the Prime Minister’s Office for the Roster of Qualified Women.

CFUW was invited often to take part in programs arranged by other organizations and to make its voice known outside the Federation. During Gwen’s presidency, the list included UNESCO, the National Council of Jewish Women, the Ontario Association for Curriculum Development, the Citizenship Branch of the Department of State, and NAC. The experience modified her outlook on how CFUW could work together with like-minded organizations. In a letter to the membership in 1972, Gwen encouraged members “to develop a broad perspective to prepare for new and unimagined directions” (The Chronicle 45: 3), for she had come to appreciate that “only by opening the way for enthusiastic support of many causes can we hope to attract and hold the attention of vigorous, creative and thoughtful members” (CFUW News 18.4: n. pag.). In her final year in office, she received another honour: the Lasell Medallion presented by the then renamed Lasell Junior College. This medallion celebrates an extraordinary alumna for distinguished service to society.

These problems had, she said, “previously been academic and had now become reality with all their attendant frustrations and conscience probing.” She regarded these issues as a challenge to all for “effectual concerned action” (The Chronicle 43: 3). In the final year of her presidency, she oversaw the 19th CFUW Triennial held in Ottawa with the theme, “Our World Tomorrow.”

Gwen was totally committed to the work of IFUW and attended many of its Triennials, enjoying both the travel experiences and the company of international women. For six years she was a Vice-President of the Virginia Gildersleeve International Fund, an independent organization formed by members of IFUW in 1969 (Clark 1). This fund provides grants globally to fund locally generated projects that advance the rights of girls and women.

When Gwen stepped down from office, she was a mere 62 years of age with energy and enthusiasm to spare. In 1975 in recognition for her work with handicapped, underprivileged, and developmentally delayed children, she was made an Officer of the Order of Canada, the first New Brunswick woman to receive that honour. That same year, she participated in the first World Conference on Women held in Mexico City organized as part of the United Nations International Women’s Year. In Sackville, she was a charter member of the short-lived Westmoreland Women while remaining active with the Elizabeth Fry Society and particularly the Kingston Penitentiary for Women, the Children’s Aid Society, and the VON. She was named to the New Brunswick Commission on Federal Constituencies, which demanded another two to three years of meetings and travel throughout the province. She was appointed to the Board of Regents of Mount Alison University in 1984 (Journal 23.5: 5).

Music remained integral to Gwen’s life. She had always been interested in the creative arts and was involved in the formation of the CFUW Creative Arts Award. Earlier in her life, she and her piano partner participated in competitions in New Brunswick music festivals where they received high marks and glowing reviews. After her CFUW presidency, she continued to play piano duets to small groups until arthritis in her hands intervened, but she assiduously followed the fortunes of the university’s Music Department. In February 2004, CFUW President Rose Beatty, who was attending Atlantic Regional Council meetings at the time, travelled to Sackville to present Gwen with a certificate of appreciation for “steadfast support of the Federation over a lifetime.”

Gwen felt privileged to be an educated woman but realized that there were inherent responsibilities. In her Lasell commencement address years before, she had outlined what those were: educated women should strive to become totally responsible human beings in their communities by thinking straight, having a vision for the future, and developing the necessary skills to be effective.

Gwen died in February 2005. It was said at her funeral “Gwen was always open to a world even bigger than the one in which she lived” (Motyer).