“Let us by private study, group discussion, and active participation as citizens make our influence for the raising of standards more effective.” 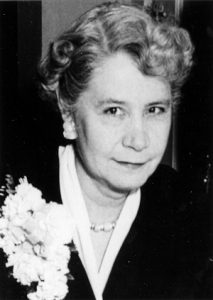 Doris Saunders, the 13th President of CFUW, whose life encompassed virtually the entire twentieth century and extended beyond the millennium, was a woman who faced and surmounted many obstacles in her career. Born in Winnipeg on November 16, 1901, she attended Kelvin High School and then entered the University of Manitoba on a Sir James Aikin Scholarship in English. There she was an early member of the Delta Delta Delta Sorority.

When she graduated from the university in 1921, she received the Gold Medal in both Philosophy and English. Doris headed for Oxford where she received a Diploma in Education in 1923 and, on her return to Manitoba, taught briefly at a rural elementary school. She then taught at Machray Junior High and Kelvin High School while finishing her Master of Arts degree at the University of Manitoba, receiving her degree in 1925 while teaching full time.

The following year, Doris was awarded a CFUW travelling scholarship to Oxford, where she intended to pursue a PhD program. Unfortunately, she was informed that the University of Oxford did not allow women to enrol in doctoral programs. She instead enrolled in a Bachelor of Letters (BLitt) program, completing a thesis called “Dr. Johnson’s Knowledge of the English of the English Writers before 1600: Excluding Shakespeare.” She had to wait until 1936 for her degree to be awarded, and it was not until 1979 that it was upgraded to a Masters Degree.

In 1928 Doris became the first woman to be appointed to the Department of English at the University of Manitoba. She was given the position of Dean of Junior Women in 1933 and continued in that role until 1945. She became an Assistant Professor in 1941, and by 1955, when she accepted the presidency of CFUW, was an Associate Professor. Doris became, in 1959, the first woman to earn the position of Full Professor in the Faculty of Arts. She was appointed Registrar of the new University College at the University of Manitoba in 1964 and held that position until her retirement in 1968. In 1965-1966 Doris was awarded the Winnifred Cullis Lecture Fellowship, by the British-American Associates to London, England, and went on a six-week lecture tour of the British Isles where she spoke on topics ranging from Education for Canadian Women to Canadian Literature. She was guest editor for the 1970 Centennial issue of The Mosaic, the interdisciplinary journal published by the University of Manitoba.

Her involvement with CFUW began with her early membership in UWC Winnipeg. After serving on many committees over the years, Doris became club president from 1943 to 1945. On the national scene, she served as Chair of the Standing Committee on Scholarships before becoming National President from 1955 to 1958. She presided over the 14th Triennial of the CFUW in 1958, described by the Canadian Press as a gathering of “344 of the brainiest women in Canada.”

During her years as National President, Canada, at the urging of CFUW and others, applied for and was granted a seat on the 18-member United Nations Commission on the Status of Women (UNCSW). This was a big step forward for Canadian women. The Chronicles published during her presidency indicate that CFUW advocated for: legislation establishing equal pay for equal work at the federal level; the appointment of a woman to the Civil Service Commission; setting up of the Canada Council and the appointment of women to its board; ratification of the UN Convention on the Political Rights of Women; the safeguarding of the nationality of married women; increasing of the amount of federal aid to education, and the preservation of buildings of architectural and historic importance on the St. Lawrence Seaway.

The Status of Women Committee, chaired by Margaret MacLellan, CFUW’s next president, reported to the Triennial that Club Presidents had been asked to study a proposed new federal Estate Tax Bill prior to a CFUW Brief being presented to the Prime Minister asking for “a true exemption of $50 000 for all estates and recognition of the wife’s contribution to the marriage partnership” (MacLellan 99). Margaret noted that the same recommendations had been made over the previous ten years by the National Council of Women, CFUW and other responsible organizations.

In her final address to CFUW members at the 1958 Triennial she offered recommendations that had grown out of her executive experience. These recommendations were both timely and far-sighted:

Present members will recognize the prophetic quality of the first and fifth of these recommendations.

MLA Anita Neville (Winnipeg South Centre) said of Doris, “There is no question her independence and her courage helped bring some very new directions for women. All academic women have her to credit.” As a result of her dedication to the education of women and her leadership in CFUW, Doris was awarded an Honorary Doctor of Laws (LLD) from the University of British Columbia in 1957 during the Golden Anniversary of UWC Vancouver. In 1966, UWC Winnipeg awarded her a Life Membership in honour of her service and dedication to CFUW on the local and national levels and named the drawing room at the Winnipeg clubhouse, The Doris B. Saunders Room. In 1967, she received the Government of Canada Centennial Medal. She is named with six other “Famous University of Manitoba Panhellenic Women”, and is the only one listed as having received the Commemorative Medal for the 125th Anniversary of Canadian Confederation in 1992. Doris later received a second honorary LLD, this one from the University of Manitoba in 1994.

Doris had a special fondness for her yearly summer vacations on Teachers Island in Clearwater Bay, Ontario. Here, always with a foursome for bridge and plenty of good books for company, she spent many happy hours relaxing and taking a much-needed break from her demanding schedule. A tribute published in the Winnipeg Free Press in 2003 stated: “Doris will be remembered for her intelligence and ability, her quick humour, her creativity in skits at the club [the UWC] and the strength of her character” (“Doris”).