“Intolerance is incompatible with the human spirit.” 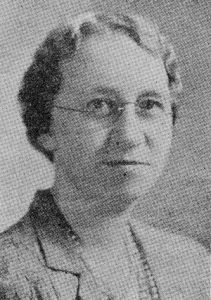 Dorothy Turville, the eighth President of CFUW, was an outstanding educator, an acknowledged patron of the arts, and a dedicated churchwoman as well as a leader in advancing both women’s issues and organizations. She taught Romance Languages at the University of Western Ontario where for 13 years she was also Dean of Women. She was a devoted scholar and teacher who, during her lifetime, was known throughout the university community as Dr. Dorothy. A strong personality, she possessed a quick wit and yet was dignified, controlled, masterful. In all her dealings, she demonstrated a clear confidence in herself, in mankind, and in her God. An idealist in a period when ideals were crumbling, she believed in and devoted herself to truth, faith, excellence, and beauty, believing that one could rise above life’s difficulties and circumstances to create a better world.

Born into a prominent London, Ontario, family in 1895, Dorothy graduated from Western in 1917 with First Class Honours in English and History. She continued her studies at Columbia University, completing a Master’s degree in Romance Languages in 1921 followed by her doctorate in 1925. In 1924, as her PhD was nearing completion, she returned to the University of Western Ontario as a member of the faculty. By 1925 she had published the book French Feminine Nouns Derived from Latin Neuter Plurals which has ever since been associated with her name. In 1926 she published a popular travel book, Travel Articles with Illustrations, written for the London Free Press. She also traveled to the Sorbonne in France and Firenze in Italy to undertake further studies in Romance languages. In addition to her work as a lecturer, later professor, in Romance languages, she became the University College Advisor and in 1933 was appointed as the University’s second Dean of Women. In her roles as Advisor and later Dean, she was consulted on social problems, etiquette, study, finance, and anything else the students wanted to ask her. Her message to the students during those years was consistent with her beliefs: “Your task is to make the best use of your years here”. During her time as Dean, Dorothy was a great believer in the importance of science and training, so much so that in 1946 she retired as Dean of Women because she felt the job needed someone who was scientifically trained to undertake professional counselling. She continued to teach at Western serving with great distinction as a professor in the Romance Language Department and, after her retirement from teaching, as a liaison Officer for the Alumni Association (Coates and Berton 52).

Throughout her life, Dorothy’s accomplishments in establishing and contributing to the development of organizations for the support of women’s interests were impressive. In addition to her dual role at Western and her membership in the CFUW club at London, she was a founding member of the Association of Women’s Deans in 1936, President of the Alliance Française, active in the Women’s Auxiliary of the Anglican Church, member of the National Board of CFUW, and National President of CFUW. Furthermore, she was very involved in IFUW, and was proud to have attended all but one IFUW Triennial from 1932 onwards. Her experiences in Europe travelling and studying as well as her regular attendance at IFUW meetings, instilled in her considerable knowledge and affection for the Continent. This background, in turn, was instrumental in stimulating her active role in organizing CFUW members to help the women of Europe during WWII.

Dorothy achieved considerable fame as a speaker from the 1930s onwards. Her accumulated encounters with Europeans and their culture provided her with a wealth of experiences to share. She became sought after both as a raconteur who told delightful tales and a speaker who demonstrated great insight into such countries as Sweden, France, Italy, and Poland. Her experience at the 1936 IFUW Triennial in Cracow, Poland, left her with considerable sympathy for Polish women, a topic on which she was frequently asked to speak. She was convinced that one of the great causes of misunderstanding amongst the European countries was the confusion over their currencies.

Her 1937 report as National Membership Secretary (1937-1940) indicates her forward thinking when she assured CFUW members that the records being sent to National will “be preserved as a source for the compilation of the history of women’s achievements” (“Triennial” 20). At all times she strongly believed in the power of women and the need for them to use their increased privileges (i.e., the vote) to effect change. In an article in Western’s 1939 Gazette she urged that women take their participation in the political arena very seriously, especially their voting responsibilities, “Women must bring their own special gifts (to the vote) rather than follow the tradition of male voters.” No voting on traditional family patterns or to please husbands, fathers, or brothers for Dr. Turville!

She became President of CFUW in 1940, when the ravages of WWII posed a threat to many of the European IFUW affiliates, with some federations being shut down, and others significantly weakened. During these years, according to the various Chronicles, she urged Canadian women to be proud of their association with IFUW. She toured Canada challenging CFUW members to remember, “the noble women held in Hitler’s prisons” and urging them to provide leadership, to continue to support international scholarships, to provide aid to refugees, and to support peace. During this period, war work received priority. CFUW members across Canada became leaders and workers in the Red Cross, worked in canteens and in other service centres, and became members of the various women’s divisions of active services. Many clubs sent parcels of clothing for refugees. Dorothy also led CFUW to undertake such projects as funding a field kitchen to be sent overseas and she reports that in 1942 CFUW accepted the invitation to be morally associated, when “a Christmas message from the women of Canada was broadcast by the BBC to the women and children of France through the instrumentality of ‘France libre’” (“Report” 13). Under the auspices of her leadership, intricate plans were made to provide temporary homes for the children of British university women. These plans were halted, however, when the British government suspended such evacuations because they had become too dangerous (Heakes).

During these war years, many European clubs were disbanded; the IFUW Triennial was cancelled and a North America regional meeting was held in Havana in November 1941. Presidents of defunct federation member clubs in Europe smuggled news out to their sister organizations, and some groups, such as those in Sweden, tried to block Nazi interference with messages, passing real information as best they could. Dr. Turville advocated that members of CFUW (and by extension, IFUW) needed to be prepared to build a new world when peace came after the war and she saw education as key, particularly for Fascist and Nazi youth. So concerned was she with the effects of the war on education that she urged CFUW members to save good French classic texts to send to France, Czechoslovakia, and Poland at the end of the war “to reinstate the means of education” (“Did You Know“).

On the national front during the war years, CFUW’s internal organizing activity was limited, with only two new clubs being established, bringing the total CFUW clubs to 38 with 3008 members by the end of her presidency in 1943. Nevertheless, the objectives of CFUW continued to be paramount. The war notwithstanding, in 1942, Dorothy wrote a letter to then Prime Minister Mackenzie King with CFUW’s request that his “government appoint a woman member on the Civil Service Commission . . . when a vacancy occurs.” Her argument for his doing so was cogent, noting that because of the war, many women were currently being employed in government positions, and that “National Selective Service will affect the university-trained women of Canada to a great extent” (Turville, Letter). His response was a formal acknowledgment of her request with an added postscript: “Private. I do not hesitate to say that personally I strongly favour your suggestion” (King, Letter).

Dorothy strongly believed that it was a requirement of all Federation members to understand the economic plans going on around them and to carry out the aims of CFUW to the fullest. She strongly upheld CFUW objectives: to stimulate the interest of university women in local affairs; to promote the higher education of women and promote research by offering scholarships, and to facilitate the social intercourse among women of various universities and among members of IFUW.

In 1964, the University of Waterloo honored Dr. Turville with a Doctor of Laws (LLD) degree for her years of outstanding work, followed in 1965 by the University of Western Ontario that named one of the four new women’s residences after her. Her love of travel and languages, her travel abroad to learn languages and her reputation for excellence is further remembered at Western today with two annual academic awards, one in French, the A. Dorothy Turville Gold Medal, and another in Modern Languages and Literature (MLL, the Dorothy Turville Undergraduate Travelling Fellowships.

Dorothy Turville died April 24, 1975, in, Ontario. Following her death, Canon Cyril Ladds said: “Ada Dorothy Turville was a certain kind of human being – one perhaps all too rare – who was a blessing to herself and to everyone with whom she came in contact . . . an outstanding educator, Churchman and patron of the Arts” (2).

In the “Foreword” to the 1942 Chronicle, her idealism is clear in her comment: The value of intellectual intangibles must not be obscured, even temporarily, by the glamour of uniformed service. Otherwise, our faith is vain, our training fruitless and our society degenerate. It is the task of university people to feel an active concern in building up the nation, particularly its youth, for right and truth. (11)

Even though her life spanned two World Wars and the Great Depression, Dorothy devoted her life to creating that better world.

“Did You Know?” What’s New CFUW Newsletter – Oshawa and District 3 (20

Heakes, Mrs. F. V. “Report of the Committee to receive Children of Members of the British Federation of University Women“. Chronicle. 1941. Print.