“To be a good problem solver one must be pragmatic, a keen observer of interactions and abilities.” 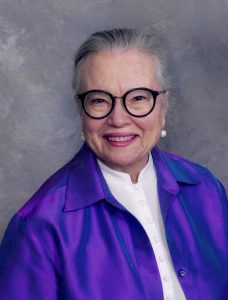 A woman with a strong social conscience, Doris Mae has had a long-standing commitment to improving our society. During her presidency her mission statement was “the power of women working together,” a natural extension of her professional activities in community development.

Doris Mae began life in Edmonton but was raised with two sisters in Barrhead, a small town northwest of Edmonton. Her parents, Jean and Avard Oulton, encouraged the girls to be involved in community activities and to take on leadership roles. Doris Mae proved to be a natural. She became president of the local branch of the Canadian Girls in Training (CGIT), editor of the yearbook, choir director, church soloist, Sunday school teacher, head of the Junior Red Cross, swimming instructor, and a camp counsellor – activities providing enormous leadership opportunities

Doris Mae graduated from the University of Alberta in 1969 with a BA in psychology and sociology. Two years later, her Masters degree was completed in an interdisciplinary community development program. She followed this with extensive post-graduate training in human relations, group leadership and to round out her skills – training at the Cordon Bleu cooking school in London, England.

Her first job was a cooperative project between the University of Alberta and the National Film Board (NFB) using media as a community development tool. After completing her post-graduate studies, she served as a community development officer with the Government of Manitoba living in a remote northern forestry shack. She was charged with building local government and economic development in small northern communities and over the course of her work she helped establish a governance structure (mayor and council) in two communities, set up a lumber operation, and design a northern housing project. Her next position was even more challenging. Under the aegis of the NFB, she facilitated the use of media as a communications tool in a vast area covering Alberta, Manitoba, Saskatchewan, and the Northwest Territories, working with community residents to help them acquire essential skills. These included assisting Inuit who were resisting new trapping regulations on Banks Island and needed to use media as a way of telling their story, to pirating broadcast signals in Northern Saskatchewan. At the National Film Board she was mentored by Dorothy Henault, head of its Challenge for Change program, who taught her how to package a message and gain support from the biggest audience.

Marriage followed to Cam Mackie, who was then Director General in Manpower and Immigration. She moved to Ottawa and became coordinator of Algonquin College’s Community Development program. There she was involved in designing the program, acquiring staff, teaching community facilitating methods, and supervising field placements for students who were placed in positions throughout Canada. This continued for over five years.

In 1983 her family relocated to Winnipeg where she began a 15-year career as a civil servant with the Government of Manitoba. First she was a northern development officer working to establish small business opportunities, then head of the government’s Status of Women portfolio, and then Assistant Deputy Minister for Culture, Heritage and Citizenship, where among other things she negotiated the first Manitoba/Canada immigration agreement. Next, Doris Mae became Chief Executive Officer of Manitoba’s Children and Youth Secretariat. The Secretariat served as a hub for the activities of eight departments that handled a multitude of social issues associated with children and youth. During this period she was mentored by Gerrie Hammond, the Manitoba Minister responsible for the Status of Women, someone she describes as supportive, kind, and opinionated whose strength was in building alliances and issuing orders when alliances were not possible.

Soon after moving to Winnipeg, Doris Mae’s mother-in-law gave her a CFUW membership, and within a year she found herself Club Vice-President and then President of UWC Winnipeg from 1990 to 1992. Later, she went on to become Regional Director, VP Communications and Governance – at the same time as she was working full time and raising a family.

While VP Governance, Doris Mae observed that CFUW’s connection with its Clubs had fragmented and weakened over the years and she believed that closer ties had to be re-established through a forward-looking agenda. Her President’s reports at the AGMs focussed on the work of the Clubs and she encouraged them to ‘roar.’ She was webmistress of CFUW’s interactive site which resulted in robust exchanges among the membership. She introduced the AGM newsletter and whenever possible helped RDs and Clubs make connections to increase the dynamic exchange of Club success stories.

Leading up to taking the president’s role in 2014, she worked to modernize the ‘look’ of CFUW. During her first six months she started Operation Connect when she tried to call every Club president. She was made aware of four consistent concerns: high dues, succession planning, membership, and diverse communication issues. Opinions on communication were often conflicting: some members said they did not receive any information, others that their e-mail boxes were flooded with too much information. She rationalized systems so that communications became more responsive to member’s needs and information sources became more specific. After the RDs conducted a survey which showed that most club members received their information through their own newsletters, she introduced a press agency – a source of news about CFUW events written specifically for Club newsletters.

At the AGM in 2016 she included Club-centred success stories which focussed on the best practices within CFUW, an exercise she called “taking our temperature” designed to “see where we need to move forward – or in a different direction.”

Doris Mae also laid the groundwork for the 100th anniversary project that included plans for researching and writing profiles of Past-Presidents, a book detailing the history of CFUW, a scholarship program, development of awards and designing specific pins and acknowledgements.

She believed in transparency and that people worked best when their roles were clear so that they were then supported in executing their jobs. She undertook writing the administration manual that brought all the CFUW policies and procedures into one place, and continued to try to rationalize the governance structure of CFUW, shepherding the change of the executive position on the Board from VP Communications to VP Education.

Doris Mae also wished to provide members with good information, be it through webinars that prepared new attendees for CFUW AGMs, or the orientation process to prepare delegates who attended the United Nations Commission on the Status of Women (UNCSW) in New York. In both her years as President, CFUW members conducted workshops at UNCSW; in 2015 and 2016 relating to the CFUW/IFUW Resolution on Non-State Torture and also in 2016 relating to feminist research.

of the significant federal issues during her time in office was Missing and Murdered Indigenous Women (MMIW) and although CFUW had no resolution specifically on aboriginal violence it did on the issue of violence against women. Wanting CFUW to be recognized as a leader in this nationally important issue, she asked Clubs to respond with their support. Hundreds of letters poured in from across the country and she concluded that CFUW had a very positive impact on changing the position of the then Minister in charge of the Status of Women on the issue. CFUW continued working in partnerships on this and other issues. One example was by supporting the Canadian Human Rights Commission on its call for an inquiry on Missing and Murdered Indigenous Women. The inquiry came about with a change of government in 2015.

During Doris Mae’s presidency CFUW was regarded as having an important role in Civic Society. Government adopted and supported many of the policies that CFUW had been working years to support: pay equity, funding for the CBC, reinstating the Long Form Census, supports for education, and a House of Commons Standing Committee on Foreign Affairs and International Development. This committee lends support for the implementation of the United Nations Security Council Resolutions on women, peace and security, which necessitates the protection of women’s rights and women’s meaningful involvement in all efforts to prevent, resolve and recover from armed conflict.

Another challenge was internal to CFUW: to identify innovative ways of providing and nurturing leadership and to support some of the smaller clubs financially. A further issue for CFUW was its troubled relationship with the International Federation of University Women now known as Graduate Women International.

For many years CFUW Presidents have urged its members to run for political offices, and in the 2015 federal election five CFUW members were elected. Clubs from across Canada were actively involved in encouraging people to vote during the federal election campaign and in many ridings their work was visibly linked to an increase in voter turnout.

Currently, Doris Mae is CEO of Community and Youth Solutions (CYS Inc.), an organizational management consulting company, which she has managed and maintained in Winnipeg for almost 20 years. In that position she has facilitated strategic plans for not-for-profit groups, government and private organizations, many First Nations and Metis organizations, and for the federal Treasury Board and Health Canada. CYS projects cover many facets of our society, mainly health business plans, high-risk families, crime prevention, chronic diseases – the list is extensive. Throughout her presidency, she used her expertise in helping small groups to develop strategies, assisting, for instance, an initiative of CFUW Ottawa, Women Helping Afghan Women, to design its next steps and to continue the implementation of CFUWs Strategic Plan.

Doris Mae has proven to be an agent for change inside and outside CFUW. She worked with diverse organizations such as the YM/YWCA which gave her a Woman of Distinction Award in 2001; the Nellie McClung Foundation; Women of Winnipeg (a founding member); LEAF Manitoba; and the Manitoba Recreational Trail Association. The Winnipeg Free Press named her the Martha Stewart of Manitoba and her passion continues to be gourmet cooking. Her garden has been featured in several magazines and television programs. She remains an active hiker and continues to have an interest in both the sport and recreational use of nature trails.