“I would wish you . . . good health, a broad vision and continued interest in carrying on our great aim – of helping fellow graduates wherever they may be.” 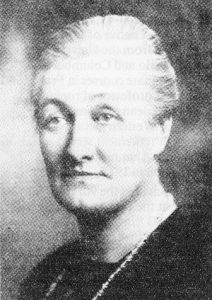 Charlotte Hinds was born in Acton Vale, Quebec, on August 1, 1875, to Charlotte Smith Hinds and Edward Hinds, an engineer (Sweeny). Little information is known about her early years and family life, but in 1897, at the age of 22, she graduated from McGill University with a BA degree. She taught school in Quebec for some years before marrying J. W. Melrose. In 1906, one year after Alberta and Saskatchewan became the eighth and ninth provinces of Canada, Charlotte and her husband moved to Regina. Shortly thereafter, they moved to Edmonton where they lived for the remainder of their lives.

As a young wife, Charlotte must have been interested in a world wider than her domestic domain as she received a second BA from the University of Saskatchewan in 1907 and, according to her Memorial Tribute, may have received a third BA from the University of Alberta in 1908 (Turville). Archivist of the University of Alberta, Trudie McLaren, admits to being puzzled by this but wonders if there was some arrangement whereby an outside degree [may have been] accepted, but there is no evidence in the university records (Irwin 5 May 2015). It is interesting to note that the University Act of 1906, which established the University of Alberta, invited “graduates of any university in His Majesty’s Dominions” to register themselves as members of the first convocation, for the purpose of electing the first university Chancellor and Senate members. The Act listed eligible degrees and faculties that it deemed acceptable. It also required that the applicant pay a two-dollar fee and have resided in the province for three months prior to the election before being eligible to vote. The first Chancellor was appointed in 1908. A photograph taken in 1948 of 37 members of the first official Convocation of the University of Alberta held in 1912, shows the imposing figure of Charlotte Melrose as one of the eight women present. As the first classes of the new university began in September of 1908, it is likely that Charlotte had taken advantage of the opportunity to use her prior degrees to become a member of the first Convocation.

Upon the opening of the new university, a need was seen to start an education club to encourage female students and assist them financially. On November 30, 1909, a small group of women gathered and passed a motion to organize such a club. Within two months they established a fully functioning organization that included an executive, a constitution, and a set of stated purposes (Buckley). We can speculate that with her interest in education and her university background, Charlotte Melrose would have been one of the forty members of the new club which evolved into UWC Edmonton and therefore a founding member of CFUW. With only the names of the executive members listed in the records, however, we cannot be certain.

We do know that at some point Charlotte became active in women’s issues for, in 1929, she became the president of UWC Edmonton, a position she occupied until 1931. In 1930 the 131 members of this club were largely concerned with moral issues. The club history, As It Happened – The First 60 Years, says that in the 1920s and 1930s virtue and vice were clearly defined and “we were firmly on the side of virtue” (Buckley). Education, scholarships, and the establishment and stocking of libraries were among the club’s other areas of interest. An invitation was issued to CFUW to hold its 1934 Triennial in Edmonton where rooms were available in the women’s residence for $1.00 per night. The invitation was accepted.

Charlotte Melrose, the seventh President of CFUW, was elected at the 1937 Triennial in Toronto “at a time in her life which is sometimes considered past the age of retirement” (Turville 7), and served until 1940. Two other members of UWC Edmonton joined her on the National Executive: Mabel Patrick as Recording Secretary, and Mary Butterworth as Editor of the Chronicle. The total CFUW fee per member was $1.50 of which 31 cents was paid to the IFUW.

During Charlotte’s presidency the CFUW National Executive consisting of 26 women from 13 separate clubs met annually – in Saskatoon in 1938, and in Montreal in 1939. During her second year as National President, committees were formed to look at the legal and economic status of women, and teacher exchanges. CFUW’s Committee on Education planned to complete by 1940 their report on “Women in Administrative Positions in Canada” (Chronicle 1938: 22). This report is “proposed to continue and supplement the valuable work done by the 1935-37 Education Committee” (Chronicle 1938: 22). CFUW members from Quebec reported that they would continue to fight for the right to vote in provincial elections. Federation membership was recorded as 2251.

The September 13, 1939, CFUW Executive meeting acted on an item from the minutes of the Sub-Executive on the possibility of hiring a permanent national secretary for $400 per year for a woman working in her own home and a further $100 for equipment. With surpluses of $761 in the general CFUW fund and $190 in the scholarship fund, a motion was passed to proceed with the hiring of a secretary whose work would commence after the next Triennial and be divided between the two groups with the cost born proportionally by the two funds. It was noted that “this action be initiated now as it might hold the Federation together during a difficult period” (Chronicle). At this meeting it was decided to publish Executive minutes in the Chronicle. Committees were also appointed to deal with resolutions and courtesies.

In 1937, when Charlotte was elected and the threat of another war loomed, CFUW was becoming concerned with providing aid to exiled European women. The period of Charlotte’s presidency (1937-1940) was a perilous time on the world stage. On March 12, 1938, Germany announced the Anschluss (union) with Austria; the Austrian Federation of University Women ceased to exist three days later. Past President Margaret McWilliams had reported at the 1937 IFUW Paris Council meeting “There are 35 countries in all in the IFUW now that the governments of Italy and Germany will not permit their women to share in our work” (McWilliams 53). Charlotte and 24 other Canadian delegates attended the IFUW Conference held in Stockholm in 1939, and experienced the nerve-wracking experience of sailing home after war had been declared. IFUW and the national federations from countries where women still enjoyed freedom of access to universities and intellectual work were greatly interested in aiding women graduates in countries being negatively affected by the war. As reflected in the 1937 CFUW Triennial meeting, special funds were set aside to aid displaced graduates. IFUW was particularly concerned about Dr. S. Adamowicz, the IFUW President who was living in German-occupied Warsaw and was allowed to carry on her work only under German supervision. By 1942 her home had been destroyed and Dr. Adamowicz was reported to be “in real need in Warsaw, and suffering from despair” (Coates and Berton 51).

After her term as National President, Charlotte Melrose continued to maintain an active involvement with CFUW. She was a delegate to the national meeting in 1944 and attended the 1947 IFUW Triennial in Toronto. But what of Charlotte’s personal life, character, and influence? Born toward the end of the nineteenth century she experienced the excitement of a new century, the expansion of Canada, the horrors of WWI and WWII, as well as the privations of the Great Depression of the 1930s. She married and was the mother of three children. During WWI Charlotte began teaching at an Edmonton School where she completed the term of a teacher who had been called up to serve. She continued to teach at various city high schools until her retirement in 1934. As she had become a widow in 1920 at the age of 45 she may very well have needed her teacher’s salary to support herself and her family.

Charlotte had the privilege of acquiring a university education at a time when many were unable to read. That she appreciated her education and was concerned with having a positive influence on the larger society was evident from her activities and actions. Her chief interest was the Church of England “to whose activities she devoted much time” (Turville) and she was a member of the vestry of Holy Trinity Church. In 1915 she became the first President of the All Saints Cathedral Afternoon Women’s Auxiliary Branch, a position she held until 1919. The Bible Society was a special interest and in 1920 Charlotte became a member of its North Alberta Auxiliary Board of Directors. She went on to become Vice-President of that organization and eventually became a Life Governor of the Bible Society in Canada. Put that together with her membership on various hospital auxiliaries, the Historical Society of the British and Foreign Bible Society, the McGill Alumni Association, the YWCA, the Women Teachers Club, the Soroptimist Club as well as her commitment to CFUW at national and club levels, and you will find a hard working and dedicated woman whose influence would be hard to measure. A member of the Edmonton club remembered Charlotte as a somewhat dominant woman of great strength of character, influence, and determination (Irwin 14 Nov. 2015).

Charlotte died in 1953 at the age of 73. Dr. Dorothy Turville wrote in her Memorial Tribute: “In all her dealings, her chief characteristic was uncompromising integrity, so that justice and uprightness guided all her decisions. These high principles drew to her the admiration, loyalty, and deep affection of a host of friends” (7).