“We are making progress as we adjust to the challenges and we are fortunate in knowing…that we are one of the organizations that has the Right to Speak and the Responsibility to Act.” 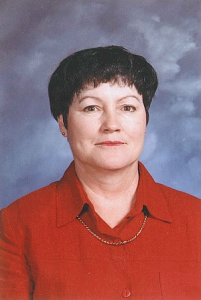 Brenda Margaret Wallace was born in Regina, the daughter of parents who strongly believed in a quality education for both of their children and understood the need to encourage academic, musical, and athletic excellence. Her father had not had the opportunity to finish elementary school and realized that education could open many doors for his children. When he was unable to work because of illness, her mother began a career as an auditor with the Saskatchewan Government that lasted 23 years. Brenda attended McNab Elementary School and then Luther College, Regina, for high school and first year university.

She next studied at the University of Saskatchewan and the University of Regina. After starting out in the Arts Program, she discovered that her true passion lay in teaching and switched to the Faculty of Education. Brenda’s special skills lay in the area of primary education and literacy. She had a fulfilling and successful career in teaching small children, while enjoying the balance that came through working with university interns and colleagues. The opportunity to teach in Heidelberg, Germany, with the Department of National Defense School for three years allowed her to live within the history and culture of Europe. After her return to Canada, Brenda was invited to attend a CFUW Regina annual dinner. She found that she recognized many of the women present, and joined CFUW because of the contributions being made to education by the club. This focus resonated with her own keen interest in education.

Brenda became very involved with her club, serving on the Scholarship, Membership, and Fundraising Committees. She became club Archivist, and served as Vice President (2002-2003) and as President for three terms (2003-2004, 2010-2011, and 2015-2016). She was the Liaison person with National Office for the 2004 CFUW AGM held in Regina. At the national level Brenda served as RD Saskatchewan, VP Prairies, and, following her presidency, as CIR.

At the 2009 CFUW AGM in Winnipeg, Brenda was asked to consider putting her name forward for President of CFUW. After discussions with family and friends, she realized that she had the time, the knowledge, and the skills to lead CFUW. She served as CFUW President from 2010 to 2012 and found the challenge of leading CFUW at a time of great change exciting. She chose to continue to use the theme of the previous two years “The Right to Speak; The Responsibility to Act,” as it suited her focus on action.

At the beginning of Brenda’s term Executive Director Susan Russell retired, and CFUW hired a new Executive Director, Robin Jackson. The first year represented a transition period and a learning curve for both – the new Executive Director and the new President – and daily calls and frequent e-mails became the order of the day. Her 2011 CFUW AGM saw the development of an expanded online registration and evaluation process.

During Brenda’s term of office one issue that came to the fore was the demise of the Long Gun Registry. This led to concerted advocacy efforts by National Office, CFUW clubs, and other like-minded organizations to retain the registry as a matter of public safety and as a measure to assist in the prevention of violence against women. Other issues of great importance to CFUW included the implementation of the United Nations Security Council Resolution 1325, Women, Peace and Security, and the efforts, in concert with other IFUW affiliates, to get women to the International Conference on Afghanistan being held in Bonn in 2011. In partnership with CARE Canada, Brenda moderated CFUW’s workshop on Maternal Health at the Women’s Worlds 2011 Conference in Ottawa.

A new governance structure that reduced the number of persons on the National Board was in place but the Board was also working in a time of change within CFUW. The process to revise CFUW’s Constitution had been started and with the new federal government requirements for non-profit organizations, that need became imperative. Through an extensive consultation process of two years, new CFUW Articles and By-Laws were drafted. This new document was presented at the 2012 Victoria AGM and passed after a lively debate. At the same time, CFUW was faced with the need to increase its dues to compensate for increasing costs and decreasing membership.

The CFUW Board and National Office worked assiduously to provide consistent advocacy on behalf of women and girls, strengthen networks, improve the UNCSW program and ensure that CFUW was recognized at the annual UNCSW sessions in New York and particularly through its presentations at parallel sessions. CFUW had worked with a strong network of partners for a number of years and at the time of Brenda’s presidency the Ad Hoc Coalition on the Status of Women was “housed” within the CFUW National Office. However, that accommodation was discontinued when the Coalition made the decision to wind down its efforts due to lack of funding from outside sources.

At the beginning of Brenda’s term of office CFUW forwarded three resolutions, Climate Change, Cluster Munitions, and Financial Literacy, to the 2010 IFUW Triennial in Mexico. These all passed and later in Istanbul, 2013, each affiliate was given a copy of the booklet on Financial Literacy Beginning the Conversation prepared by UWC Montreal Inc. She was CIR at the 2013 IFUW Triennial in Istanbul, when three more CFUW resolutions were forwarded: Indigenous Education which focused on equal access to quality education for all, Non-State Actor Torture, and The Nordic Model of Prostitution. The resolution on Non-State Actor Torture, the work of Jeanne Sarson and Linda MacDonald from CFUW Truro, had been introduced to CFUW and passed at the 2011 CFUW AGM in St John’s. This focused on the long-term abuse many victims suffer from non-government perpetrators, including family and friends. Passage of the resolution into policy enabled CFUW to be represented at the Geneva Committee on Torture, where the statement was adopted as a legal reference with regard to Non-Actor State Torture. Furthermore, the presentation on the Nordic Model of Prostitution, prepared by CFUW Vancouver and concentrated more on the “johns” rather than the prostitutes, was well received at both UNCSW and IFUW.

Brenda’s greatest challenges as National President were managing the organizational change in governance structure, the relocation within Ottawa of National Office, and the passage of a much-needed dues increase. The biggest achievement of her term was the completely refurbished CFUW Articles and By-Laws and she felt that her best moment came as she watched democracy in action during the final debate before passing these new Articles and By-Laws.

Brenda asserts that CFUW has expanded her world-view and through working with CFUW advocates she is more aware than ever before of the difficult road to women’s equality and how many steps remain to be taken. At IFUW Triennials she had the opportunity to see how “a diverse group of women share common concerns and also, how difficult the changes that we need to make in the 21st century are for some to accept.” In Istanbul CFUW was successful in placing its members on every IFUW committee. On the international scene Brenda also attended UNCSW meetings in New York in 2011, 2012, 2013, and 2016.

Her mentors have been several outstanding women starting with two High School Teachers: Louella Lovering, Past President of CFUW Regina, and Jean Steer, Past President of CFUW, women who led by example. Members of CFUW Regina, Beulah Fernando, Elaine Yeomans and Amber MacLeod have encouraged her in numerous ways over the years. Susan Russell, who, she says “. . . continues to be astounding with her knowledge and passion for women’s rights, has been a wonderful resource and friend.”

CFUW has been a fulfilling and important part of Brenda’s life. To quote a colleague “Brenda was the right President for CFUW at that time.” She remains committed to life-long learning, education, and equality for all. She remains active in CFUW and in 2016 she completed her most recent term as President of CFUW Regina.