“I believe our challenge in the next biennium is the ability to move our Provincial Governments to action, to get them to listen the same way as we got the Federal Government to listen to us.” 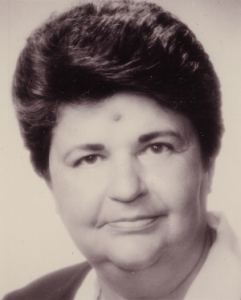 Betty Ann Laun was born in 1938 and grew up the only child of loving parents in St. Paul, Minnesota. Her parents encouraged her to become a general all-round athlete, a skilled figure skater, and to exploit her considerable intellectual skills.

Betty studied Mathematics and Computer Science at St. Catherine’s College in St. Paul, graduating in 1960 with her BA and her Phi Beta Kappa honour keys. She remained in close contact with the Sisters of the college most of her life and Sister Seraphim was her lifelong mentor. After graduation she worked for Sperry Univac developing computer software in the areas of missile guidance and automated computer design. At that time, she was doubly a pioneer as a female computer specialist in the computer industry, then in its infancy and male-dominated.

She met her husband, Tom Bayless, while playing softball and they became each other’s strength and support throughout their marriage. After leaving Sperry Univac, Betty worked for three years as the Executive Director of Common Cause Minnesota (the state branch of an American national lobbying organization) and, at one time, was employed as the Executive Director of the League of Women Voters in St. Paul. She was a member of AAUW in St. Paul, where she held several local and state offices. She was also active in the Citizens League Community Issues Study Committee and was a member of the Dakota County Mental Health Board.

Through her work with these various advocacy groups Betty learned and developed her impressive advocacy skills. CFUW later benefitted from her expertise and she shared her organizational abilities with members while having fun at the same time. Susan Russell, who was later CFUW Executive Director, said in an e-mail on September 26, 2015: “[Betty] had a great sense of fun and purpose combined with a huge sense of political savvy and knowledge of [advocacy] process that enabled her to be one of our best Presidents for seizing the moment and knowing which advocacy issue to push.”

Betty began her involvement in CFUW when she and Tom moved to Montreal in 1984, where Tom worked on computer systems for the Canadian Navy’s new frigates. She joined the two CFUW clubs there, becoming a member of both UWC Montreal Inc. and UWC Montreal Lakeshore. In 1987 they moved to Saint John, New Brunswick, where Betty continued her involvement with CFUW as a member of the now defunct Kennebecasis Valley (KV) club from 1987 to 1990 at which time she was the editor of the KV club newsletter (Anderson). Her profile in that newsletter in September 1989 reported that she had taken additional courses in math and French and that she had recently passed the Canadian Securities Course. She also became very involved with sports for disabled men and women including the Special Olympics and joined a Ringette Team where she played a mean game. In 1990, they moved back to Montreal where Betty re-joined and eventually became President of UWC Montreal Inc. She was also once again an active member of UWC Montreal Lakeshore where she became the Public Relations Director. Betty was a regular participant at CFUW AGMs and in 1992 she was named CFUW Legislation Chair, a position that enabled her to use her well-developed writing skills. During this time, she worked with CFUW Status of Women Chair, Susan Russell, and Education Chair, Susi Ross, to revise the CFUW Policy book.

Betty was installed as CFUW President at the AGM in St. John’s, NL, in 1996, serving until 1998. During her term as President she and Tom resided in Ottawa where she joined the local CFUW club. She brought to the CFUW Board the considerable advocacy skills she had honed at American national lobbying organizations, and under her leadership advocacy was the priority. Informality and hard work were her criteria for good Board work. CFUW policy issues that were of very great importance at that time were the two resolutions on gun control and landmines. Working on those issues led to CFUW’s expanding its advocacy efforts through working with a consortium of groups to ensure progressive gun laws in Canada. Under her leadership CFUW also partnered with Mines Action Canada on the landmines issue. Susan Russell relates that much of CFUW’s work on gun control and with Mines Action took place when Betty was Legislation Chair and that both of them attended a celebration party when the Bill became law under the Honorable Allan Rock. At Betty’s request, Susan Russell attended the signing of the Ottawa Treaty (Anti-Personnel Mine Ban Convention) in 1997, representing CFUW at this important global event.

During her presidency, CFUW partnered with other advocacy organizations to further additional items in the CFUW agenda, often using CFUW resources developed earlier. CFUW’s advocacy handbook Nuts and Bolts had been produced in 1995 for the St Catharines AGM, with a grant from Status of Women Canada, when Betty was Chair of Legislation and Susan Russell Chair of Status of Women. This $20 000 grant included funding for a workshop based on Nuts and Bolts as well as financial help to bring young women to the AGM and encourage membership growth. Used as a guideline by clubs for many years, Nuts and Bolts went through several editions and continued being relevant to changing times.

In March 1997 representatives from CFUW, met with the Executive Assistant and senior staff of Government’s Multiculturalism and Status of Women to review ”tobacco and health; reproductive technology; CPP/QPP reform; justice issues; budget cuts to social programs, child sex tourism, gender analysis, and gun control” (Bayless 5). Interestingly they stressed to CFUW the need for the organization to continue action on those issues at the federal and provincial levels.

Betty always made time to enjoy her hobbies and interests outside CFUW. She was a skilled embroiderer and needlewoman, played golf and curled, was interested in all things computer, and took lifelong learning courses wherever she and Tom lived. Betty was also a Board member of the Virginia Gildersleeve International Fund.

After her presidency ended, Betty and Tom moved to South Carolina where they built their dream home beside a golf course on Callawassie Island. It was not long before Betty became involved once again in the local and then in the State branches of AAUW, where she put her considerable financial expertise at their disposal. She served on the South Carolina State Board and then the AAUW National Board of Directors. Her all too early death was totally unexpected. Betty suffered a massive heart attack while participating in an AAUW state convention and passed away in Savannah, Georgia, on June 6, 2007.

Funds in her memory were donated by her husband to St. Catherine’s University where, as noted, she had been a member of the class of 1960. In 2009 the South Carolina AAUW established the Betty Bayless Research Projects Grant in her memory.