“I’ve always liked strategic planning because it is my inclination to look at where you want to go and how you are going to get there.” 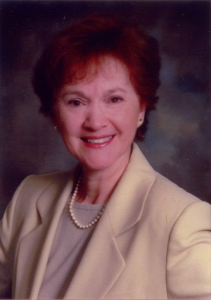 From the time Ardith Feick was a young girl growing up in Waterloo County, Ontario, she demonstrated an ability to take a long-range view of whatever problem she was grappling with and work out the details to reach her goals, whether short or long term. Ardith’s facility for logical thinking and organization, and her fascination with international affairs fuelled her life and were hallmarks of her leadership in CFUW. Her night school studies at Wilfred Laurier University in Waterloo were centred on world religions and international culture. This background in cultural studies proved to be particularly useful in her support of IFUW and the UN.

At the urging of a sister (Ardith was the eldest of seven lively sisters), she joined CFUW Kitchener-Waterloo in 1980. She juggled full-time teaching, raising two children, and taking part in many of the club’s interest groups. When, in 1995, she was asked to become club Vice-President, she rearranged her life, cut back on the interest groups, and waded in. She became Club President the following year and served from 1997 to 1999 before becoming RD Ontario West for two terms. During that time Ontario West, with 14 clubs, represented more than 12 percent of the national membership, then about 10 000. “It was a wonderful way to learn about the clubs and the countryside that shaped their CFUW work, and I needed two years to visit all of them at least once” she recounts. The interaction and sharing of ideas within CFUW proved invaluable to her. “I don’t think I can say that one person took me under her wing and taught me everything I needed to know; there were many people who did,” she says.

While RD, she was also a member of CFUW’s National Development Committee that focused on strategic planning initiatives, an area that would become a specialty of hers. From 2004 to 2006, Ardith served as Director of Development for CFUW. She was asked by then-President Rose Beatty to draft a strategic plan for the Federation and to encourage clubs to establish their own targets. During the 2005 AGM in Oakville, the membership was asked to define a five-year strategic goal. The resounding response: that CFUW be nationally recognized as a women’s equality seeking organization.

When Ardith became National President in 2006, advocating with effectiveness and attracting new members were her key goals for the Board and the clubs, the cornerstone of her activities, and the motivation for her CFUW Biennial theme: “Visible Voice – Voix Visible”. Her reasoning was that CFUW needed to be seen and heard in order to be recognized by parliamentarians, other organizations, potential members, the media, and the general public.

In guiding an organization like CFUW, it helps if you are an optimist and are able to turn obstacles into opportunities. Ardith proved she was able to do this time and time again. “Anywhere in life,” she says, “you have to allow yourself to recognize an unexpected piece of luck when facing seemingly insurmountable odds. You have to be open to see how to accomplish this.”

Her tenure was marked by some heady challenges, all of which spurred CFUW to new leadership levels as an organization. These challenges included Federal cutbacks to many programs such as the Court Challenges, the Status of Women regional offices, and the all-party agreements for universal child care and pay equity. The situation was further complicated by Canada’s increasing involvement in the war in Afghanistan and the deepening global financial crisis. When Ardith signed CFUW onto the newly created Ad Hoc Coalition for Women’s Equality and Human Rights in September 2006, little did she realize that the 100-plus organizations that eventually joined would create a new wave in the women’s movement by working together for the restoration of hard won rights. CFUW, self-funded and recognized as fiscally astute, became Treasurer of the Coalition, and CFUW’s non-partisan stance in advocacy and election-readiness training was lauded and emulated by Coalition members.

In December 2006, in protest against program cuts, Ardith marched with advocacy peers from the Supreme Court in Ottawa to the statues of the Famous Five. Two months later she presented CFUW’s views before the House of Commons Standing Committee on the Status of Women. CFUW called for the reinstatement of many cancelled social programs, especially those that impacted children and the disadvantaged. As a result of increased visibility, CFUW became recognized by the media as a leading women’s authority on the Court Challenges Program and on Pay Equity. Ardith, as CFUW President, was interviewed by CBC and quoted in dozens of newspapers.

When it came to stimulating the CFUW membership to set goals for new projects, Ardith was astonished and pleased that so many clubs rallied to the cause. “We always asked them to let us know what they were doing and we encouraged them to do all sorts of things,” she says. “We received well over 100 descriptions of their activities and with them created a Visible Voice Wall of Fame that was posted in the hospitality rooms at the AGMs and on CFUW’s website.” As part of her strategy to increase membership and advocacy and to motivate continued CFUW growth, Ardith researched and wrote for the Communicator a nine-part series called “History and Heroines”, tracing nine decades of CFUW’s accomplishments and its movers and shakers. She takes great pride in the fact that, nationally, CFUW achieved its strategic target by 2008 with many local clubs achieving their goals by 2010.

Ardith effectively led CFUW in broadening its criteria for membership to include associates and students; welcoming two new clubs, and planning an initiative for a CFUW virtual club for university students. Furthermore, she advocated for the establishment of a high level women’s agency for the United Nations; reaching the UN Millennium Development Goals (MDGs), and endorsing the Convention on Cluster Munitions.

The CFUW resolutions on a UN Women’s Agency and on support of the MDGs were subsequently adopted as IFUW policy in 2007 at the Manchester Triennial. The resolution on Cluster Munitions was adopted at the IFUW Triennial in Mexico City in 2010. Furthermore, in October 2007 CFUW and IFUW were among the first to join GEAR (Gender Equality Architecture Reform), a worldwide organization of about 200 non-governmental organizations designed to work towards the UN Entity for Gender Equality and Empowerment of Women.

During the first decade of the new millennium, electronic communication made it possible for CFUW to dialogue internationally and become better known worldwide. The New Zealand Federation of Graduate Women invited Ardith to write a feature article on CFUW’s advocacy techniques for the Federation’s annually published magazine. They were especially interested in how CFUW worked with opposition critics when Federal Government ministers refused to meet with CFUW representatives. This refusal appeared to be a setback but the outcome was that CFUW actually became better known because the opposition critics brought CFUW‘s issues directly to the House of Commons.

After her presidency, Ardith was appointed CFUW CIR for 2008-2011. Her focus was on global issues. In October 2008, she gave the keynote address to the new American affiliate, Women Graduates USA, at its first AGM in Perry, Iowa. She presented two position papers, “CFUW Partnerships” and “Maternal Health (MDG 5)” at the Mexico Triennial in 2010 and moderated panels at CFUW AGM workshops. In 2011 she sent three CFUW suggestions via GEAR that related to the future direction of UN Women – suggestions that were incorporated into its first strategic plan. She attended the official launch of the newly constituted UN Women the entity for Gender Equity and Empowerment of Women at the UN.

A further significant undertaking during Ardith’s time in office was to call on the Canadian Federal Government to honour its commitment to the United Nations Security Council Resolution 1325, Women, Peace and Security. CFUW urged the Canadian Government to engage civil society, including women’s organizations, in the planning, evaluation, and accountability of its “Plan”. This was a procedure begun by the Netherlands. In October 2010, Canada finally submitted its National Action Plan to the UN. In June 2012, CFUW was invited to a meeting that the Government staged to review the progress of this plan.

One issue in particular continues to absorb Ardith’s passion – peace – a goal she says that people can understand. “If we don’t have peace we could see that education would not necessarily happen,” she says. “We could see it in Darfur; we could see it in the Congo at the time; we could see it in Afghanistan where girls were having acid thrown in their faces.” She is particularly pleased, for instance, that CFUW raised funds to help pay Afghan teachers’ salaries and send school supplies for Afghan children.

Now in retirement in Waterloo, Ardith is a member of several interest groups in the Kitchener-Waterloo club, is active in many volunteer organizations, enjoys spending time with family and friends, and for relaxation curls, gardens, and travels.